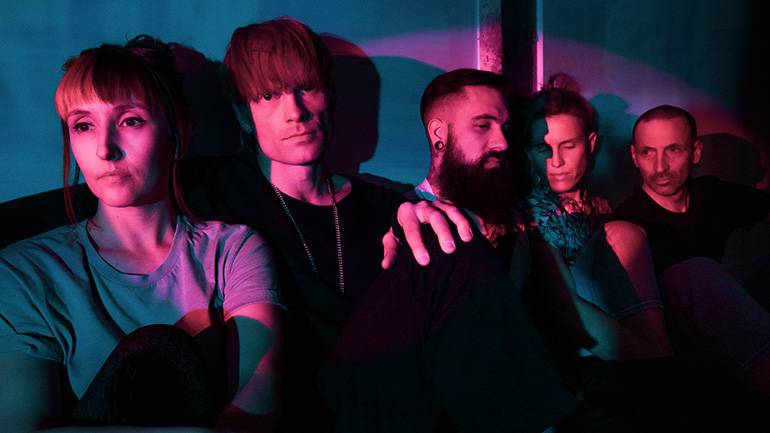 When the world prevents you from going outside, there’s no other choice but to lean inward. The old adage “It starts from within” took on a whole new meaning during the pandemic, a poignant theme that threads through Vancouver indie rock band Mother Mother’s eighth full-length album, Inside, out June 25. Written during the first wave of the COVID-19 pandemic, Inside sees frontman and songwriter Ryan Guldemond seeking inspiration through self-discovery and reflection. The band—made up of singer/keyboardist Jasmin Parkin, drummer Ali Siadat, bassist and multi-instrumentalist Mike Young, and Ryan’s sister, singer/keyboardist Molly Guldemond (who also handles all the band’s design and creative direction)—says their goal for their most recent work was to infuse their songs with a living, breathing energy that can heal their listeners. Songs like “Sick of the Silence,” “I Got Love,” “Weep,” “The Knack,” and “Forgotten Souls,” all explore the notion of finding light in the darkness, and as Guldemond explains, were born from “a different kind of travel, one more inward and personal, exploring different types of therapies, meditation, and journaling to unearth songs from a deeper, interior place.” During the summer of 2020, the band noticed that their earlier hits like “Hayloft,” “Arms Tonite,” and “Wrecking Ball,” had gone viral on TikTok, and they are thrilled that their work has found an audience, years later. “Songs don’t understand the concept of time,” says Guldemond. “They’re eternal.” Mother Mother’s EP, Forgotten Souls, is out now. Be on the lookout for Inside soon.