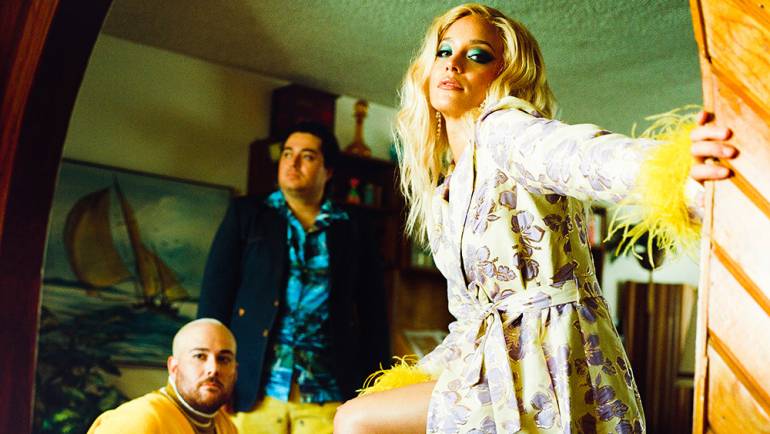 All at once, Cannons recall warm memories, the bliss of the moment, and the gaze toward a brighter tomorrow. The LA-based trio–Michelle Joy on vocals, Ryan Clapham on lead guitar, and Paul Davis on drums and keys–co-mingle handcrafted analog production, glossy guitars, and cinematic synth-craft with fluid vocals and songbook lyrics on songs like “Fire for You,” “Evening Star,” and “Holding On.” Originally formed in 2013, Cannons united lifelong friends and musical partners Clapham and Davis with LA transplant Joy via a Craigslist ad in search of local musicians. The group’s early track, “Body Talk,” received radio support from KCRW and appeared in HBO’s Ballers, while “Evening Star” was used in a Topshop campaign with Kendall and Kylie Jenner. 20 million streams as an independent act was no small feat, and Cannons’ buzz eventually earned them a deal with Columbia Records and a “Fire for You” sync in the Netflix film, Never Have I Ever. The song hit #1 at alternative radio and was followed by a string of festival dates and a national tour with Lovelytheband. Follow-up single “Bad Dream” also found success at alternative radio, where it has so far peaked at #4, and the group has continued releasing new songs like “Ruthless,” “Purple Sun,” and “Hurricane,” the latter of which Joy describes as “the first song I wrote that was more of me stepping into my own strength and power.” Cannons were nominated for Best New Alternative Artist at the 2022 iHeartRadio Music Awards and are currently on tour in support of their album, Fever Dream, which releases March 25 via Columbia Records. The 31-date trek has them performing at venues across the United States and at festivals including Capitol Hill Block Party, Okeechobee, Wonderbus, Beachlife Festival, Electric Forest.