Posted in MusicWorld on November 15, 2017 by Dana Rodriguez 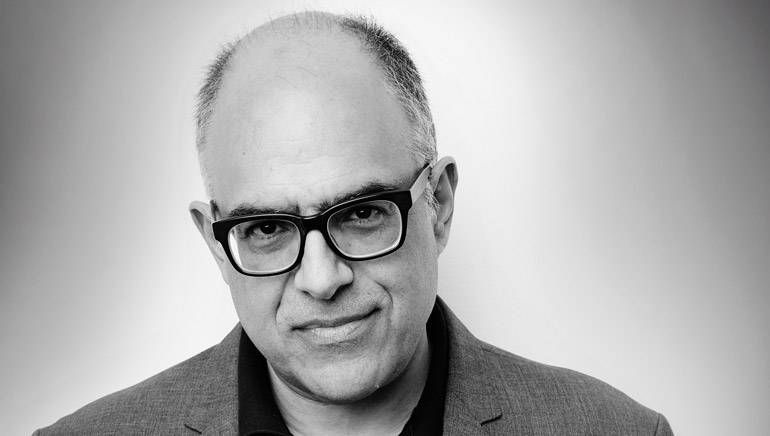 Don’t try to put David Yazbek in a box. In fact, he is adamant that genres and categories mean very little to him. But it’s really hard to believe considering his overwhelming success scoring Broadway musicals, including his critically acclaimed new show The Band’s Visit. The three-time Tony Award nominee, who has written the music for such comedic stage gems as The Full Monty, Dirty Rotten Scoundrels and Women on the Verge of a Nervous Breakdown, has this time turned a 2007 Israeli film of the same name into what The New York Times hails as “one of the season’s most exquisitely wrought scores.”

With an award-winning cast that features Tony Shalhoub and Katrina Lenk, The Band’s Visit takes the audience to a remote village in the middle of Israel’s Negev Desert, where an Egyptian police band has mistakenly ended up after a mix up at the border. The traveling orchestra’s overnight stay with a group of locals is the heart of the story and is driven by Yazbek’s magical score, which “seamlessly folds Middle Eastern rhythms and inflections into Broadway balladry.”

After an enormously successful Off-Broadway run, Yazbek has added an Obie, New York Drama Critics’ Circle, Lucille Lortel, Outer Critics Circle and two Drama Desk awards to a trophy shelf that already includes an Emmy for his stint as a comedy writer for Late Night with David Letterman. He’s also produced songs for such diverse acts as XTC and Tito Puente, as well as scored the final season of HBO’s Boardwalk Empire and written the theme song to Where in the World Is Carmen Santiago? The accomplished musician, widely known for his unique artistry and wry sense of humor, also has three GRAMMY nominations and has released five of his own rock albums.

We caught up with Yazbek during previews of The Band’s Visit, which officially opened November 9 at the Ethel Barrymore Theater.

Previews of The Band’s Visit began on October 7. How has it been going behind the scenes and what has the audience response been so far?

The audience response has been everything we hoped! We’re doing really well. We’re selling out, even previews. And we’re having a lot of fun. We did very well last year Off-Broadway, so our prime directive was to enhance it. So I think we’ve achieved those things and we’re having a really good time making our show… finishing our show, so to speak.

Where did the idea of turning a little-known Israeli movie into a Broadway musical come from?

The show’s producer, Orin Wolf, saw the movie maybe five years ago and his first impulse was to make it a stage play. And he knew it would have to have some music in it because it’s about a band. But he wanted to do it as a play initially, and then it sort of evolved to the point where he wanted it to be a musical and that’s when I got the call, asking if I would be interested in it. So I saw the movie – and it’s a great movie, it’s a really lovely movie – but I was skeptical, only because it had a quietude to it that didn’t feel initially like, “oh, this could be a musical.” But it didn’t take me long to come around to the idea that we could honor the honest aesthetic of the movie even in a form that has as much artifice as musical theater. And then that became the challenge and also the attraction.

Speaking of challenges, what are some of the biggest challenges you face adapting a film into a musical?

The challenges are different for different shows. For this show, one big challenge was to avoid engaging in a sort of cultural tourism and to honestly plunge deep into a type of music that’s not heard in musical theater very much – Arabic music – and make it work. And one way of doing that is to get great musicians, actual musicians in that idiom, to be on stage playing the music.

And your love of Arabic music stems from your childhood, right?

I was exposed to it early on and I remember it very vividly. I spent a summer in Lebanon when I was, like, seven years old and heard a lot of it and it definitely stuck with me. I’ve always liked it and been interested in it, but it’s not like I grew up in a house where that’s what was played in the house. There was a lot of different music played in my house and almost none of that, but I’ve always touched back to it.

You’ve written or produced music in almost every genre imaginable. Is there one genre that speaks to you the most?

No. That’s the short answer [laughs]. The answer is, great music in almost any genre excites me: a great song, a great piece of music. And this is the truth since before I could speak probably, so my ears have always been thirsty for anything and that can’t help but filter through and then come back out when I’m writing.

“My ears have always been thirsty.” What a great explanation.

[Laughing] It’s actually a lyric in the show!

What’s drives your process for scoring a musical? Is it the characters or the story or something else?

Well, tone always comes first. The tone of the show – the tone of the movie, the tone of the book, the script – is the big driver. Then of course the story pushes you a little bit because you’re putting a song in the middle of a story, so it needs to help the story along. And then character is big; that’s the room that you’re placing it in. Any one of those things can lead the way in any given song but all of those are in there.

Who do you consider to be your biggest influence?

There are a lot of them. I know that doesn’t help you! I have so many and at any given time I could give you like 10, and they would be different each time. I’ll always give you The Beatles. I’ll always give you Frank Loesser. I’ll always give you Captain Beefheart; he’s a big one. No one’s ever busted open American blues and rock like he did. There’s a lot to be learned from his stuff and I love his surreal lyrics. Usually the band XTC is in there for me. There’s Beethoven, there’s Sondheim, there’s Varèse. I’ll get really deep into somebody for a while, like Thelonious Monk, he’s a giant one. There’s a lot [laughs]. Oh, Antonio Carlos Jobim is a really big one for me.

You just named several really diverse influences. If you could collaborate with anyone from any era, who would it be and why?

Oh, like they could be dead? Gesualdo. Oh, you know what? Never mind, but look him up. Look up his bio and then listen to some of his music; it’s worth it. So I would say… hmmm, that’s a really good question. For me collaboration has to do with the personality of the person just as much as the talent. That’s a really interesting question because I don’t collaborate that much in terms of songwriting. I mean obviously with shows you’re always collaborating a lot and I really love it, but I very rarely collaborate as a songwriter, so I don’t really think of it that much. But, you know, it might be fun to hang out with Mozart. He seems like he was a party guy.

What new projects are in the works?

I’m doing a musical of Tootsie next year; that’s the next one. I’m also doing a musical with Jeffrey Lane, who I wrote Dirty Rotten Scoundrels and Women on the Verge of a Nervous Breakdown with. I’ll probably do an album this year. I haven’t done one for a while, so I’m sure I’ll do a band album in the next year. And there’s like little things buzzing around. I got a good two or three years of work. But there’s always room for other things. With the way these things work, if a really great movie idea comes along or something, hopefully the schedule will allow it.

Which bands or artists are you currently playing on repeat?

It’s funny, but since I’m still in the midst of rehearsing, I’m not listening to music a lot. But I went through a prog-rock phase like two months ago, so I was constantly listening to Emerson, Lake & Palmer, Yes, Queen. Before that, I went through one of my Captain Beefheart phases. I can’t really tell you who my favorite artist is or my favorite album, but the song that means the most to me is “The Waters of March” by Jobim. I probably listen to that song once a week. And my favorite version is the one he does with Elis Regina. It’s a duet version in Portuguese. When I first heard that song I was probably 14. It was an English-language version; I think it was by Brasil ’66. The English-language lyrics, which are basically the Portuguese lyrics but in English, are this series of images and I learned a lot about songwriting just listening to that song. The music and the lyrics go together so perfectly and it’s so evocative and it sums up so much…so that’s always there, that’s always on repeat.

How has your relationship with BMI benefited your career?

Well, one thing is I never thought I would ever want to teach. Not because I don’t respect teachers. I just always thought, yeah, I’d love to be a good teacher, but I just don’t have the patience and I don’t really have that “whatever it is,” that gene. But then I taught some master classes for the BMI Musical Theater Workshop and it really helped me realize that I do like communicating with people who are trying to write songs in this idiom and I do like the idea of someone who earnestly wants to learn something about creating art. And I’m old enough now [chuckles] and I’ve got enough experience under my belt that I can actually help with that, whether it’s specifically about musical theater or whether it’s about songwriting in general or lyric writing, or even collaborating. I just got a lot out of teaching those master classes, so that’s probably the big thing. And now I teach sometimes at colleges just because I like to share that stuff. I started going to the University of Minnesota every year to teach, and this year I’m going out there with my band. And I have some amazing musicians in my band. So we’ll go out and I’ll teach some master classes and my band members will also teach, separately, and then we’ll all play a show together. I’m looking forward to that.