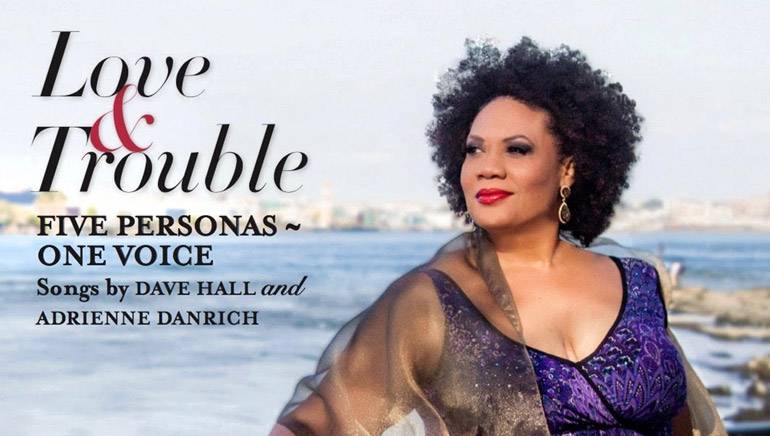 Emmy-winning soprano Adrienne Danrich has performed leading operatic roles around the world, including Aida and Madame Butterfly, and this year she will be heard at the Cincinnati and Metropolitan Operas, as well as the Lyric Opera of Chicago. In addition to being a classically trained singer, the talented BMI affiliate has carved a distinctive niche as a writer, producer and performer of her own inventive one-woman shows.

Her newest showcase, Love & Trouble: Five Personas ~ One Voice, marks her first foray into writing lyrics and composing songs, and will be presented at Feinstein’s/54 Below in NYC (254 W 54th St.) on February 20, 2018. With lyrics and poems written by Danrich, and music written by both Danrich and classical and musical theater composer Dave Hall, Love & Trouble is a unique, emotionally stirring and energetic experience that cleverly honors the stories of five different women. Danrich is quick-witted in presenting lively dialogue and songs that seamlessly transform her from one character to the next as the audience is transported from the jazz and blues lounge, to a gospel revival, to an opera house.

In celebration of her solo album debut, Danrich will be joined by other artists who will perform beloved songs and American standards throughout the evening. Among those also performing will be Kelly Hall-Tompkins (Broadway’s Fiddler violin soloist in Fiddler on the Roof); Candice Hoyes (TED Talk, Music at Google); and Olanna Goudeau & Ashley Renée Watkins (Acte II, America’s Got Talent). As musical director and pianist for Love & Trouble, Mila Henry (The Apollo, Lincoln Center Festival) returns once again to Feinstein’s/54 Below, as does renowned guitarist Jack Cavari (Thoroughly Modern Millie, Lennon).

Tickets and information are available at www.54Below.com. Don’t miss it!