Posted in MusicWorld on February 28, 2001 by Martin Huxley 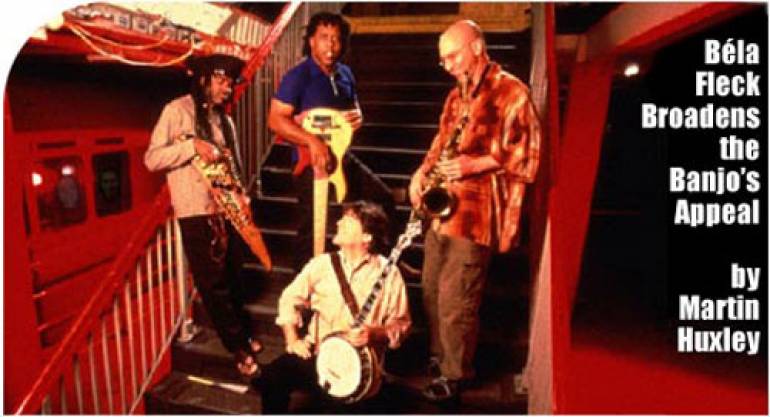 It wouldn't be an exaggeration to state that genre-bending banjoist Béla Fleck has revolutionized his instrument's place in contemporary music. With his eclectic combo the Flecktones, Fleck - who recently won Grammy Awards in the categories of Best Contemporary Jazz Album (for his album Outbound) and Best Country Instrumental Performance (for "Leaving Cottondale," a duet with fellow banjo virtuoso Alison Brown) - has consistently taken the instrument into brave new worlds, exploring a playfully adventurous stew of bluegrass, jazz, pop, funk, rock, country and even classical styles, and winning a large and devoted audience in the process.

The New York-born, Nashville-based Fleck, named after classical composer Béla Bartok, became fascinated with the banjo in his teens, switching from guitar after hearing Flatt and Scruggs' Beverly Hillbillies theme. After studying at New York's High School of Music and Art, he won acclaim at a young age in the bluegrass world, while exploring the instrument's potential for jazz improvisation.

After stints with the Boston group Tasty Licks and the Kentucky band Spectrum, Fleck joined the influential progressive-bluegrass quartet New Grass Revival in 1982 and remained with the group until it split up the end of the decade. When the opportunity to assemble his own combo arose in 1989, he launched the Flecktones with bassist Victor Wooten, his electronic-percussionist brother Roy "Future Man" Wooten, and multi-instrumentalist Howard Levy; Levy was subsequently supplanted by saxophonist Jeff Coffin. Through a series of increasingly popular albums, the group's eponymous 1990 debut, Flight of the Cosmic Hippo, UFO-TOFU, Three Flew Over the Cuckoo's Nest and Live Art, Fleck and company have forged a musical identity that's both distinctive and unpredictable, integrating a seemingly bottomless well of textures, styles and influences.

As they've continued to push stylistic boundaries, the Flecktones have won a large and devoted fan following drawn from all ends of the musical spectrum. They maintain a particularly strong constituency in the jam-band scene, thanks to the musicians' penchant for exotic improvisation.

"Sometimes when people credit Dave Matthews and Phish for our audience, we say 'Yeah, it's helping'," Fleck recently told Down Beat. "But what's really going on is years of playing a couple hundred gigs a year and building an audience from scratch and learning to please an audience so they'll want to come back. The more diverse the audience is, the better. If you've got people who would normally be jazz fans sitting in the same room with people who love bluegrass, some funk fans who love Victor [and] some Deadheads, it turns into this roomful of happy people who are all real different."

Despite the Flecktones' commercial success, the band's leader continues to branch out into a diverse array of projects in a variety of genres. The most recent Flecktones album, Outbound, is his first under a new Sony contract that calls for Fleck to also release classical and jazz projects. The musician's inclusive vision is reflected in the fact that Outbound augments the quartet with a dizzyingly diverse array of guest performers, including Shawn Colvin, Yes vocalist Jon Anderson, veteran avant-rock guitarist Adrian Belew, oboe player Paul McCandless, and keyboardist John Medeski of jazz jammers Medeski, Martin & Wood), Tuvan throat-singer Ondar and steel-pan drummer Andy Narell, as well as the tabla player and string quartet featured on the Flecktones' spirited reading of Aaron Copland's "Hoedown."

"The fact that we allow taping of our concerts has changed our approach to making records," Fleck recently explained to Sonicnet. "What's the incentive of buying a record of the same stuff without an audience to get the band excited? The point of the record is giving the audience something that they can't get live. And it's created an opportunity for us to go into the studio and explore."