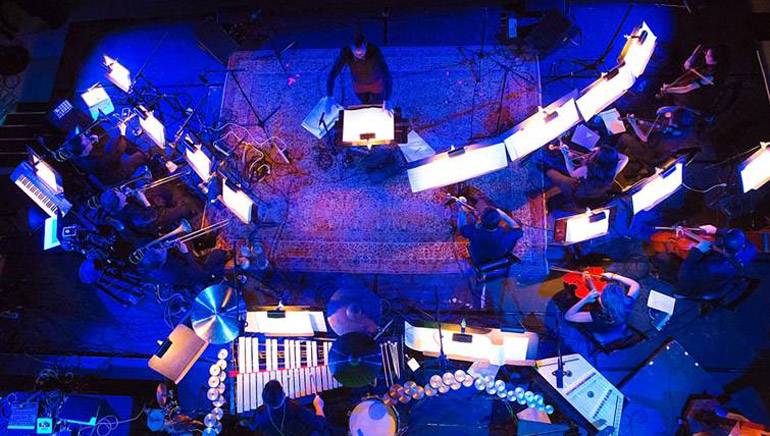 No matter the season, The Echo Society brings heat and energy to their sold-out Solstice concert events. The Los Angeles-based collective is comprised of like-minded composers, musicians, and artists who together share new sonic and visual art with the local community. Their premiere winter Solstice concert took place in December 2013, and on June 29 at Mack Sennet Studios in Silverlake their summer Solstice event featured artists from the indie alternative-classical scene to electronic-fused composers to masters of film scores, including three BMI composers: Rob Simonsen, Benjamin Wynn and Jeremy Zuckerman.

The union of these talented BMI affiliates, plus Eskmo (Brendan Angelides), Judson Crane, Nathan Johnson, Joseph Trapanese, and special guests Kira Kira and Eirkur Olafsson, along with a 12-piece chamber orchestra, made the summer Solstice event one that BMI needed to further investigate. Here, Simonsen, Wynn and Zuckerman discuss collaboration, share career insights and reveal what The Echo Society means to them.

How did you become involved with The Echo Society and what direction do you hope to see it go in the future?

Rob Simonsen: Some composer friends and I were talking about how we would love to write some music for music’s sake, and get a little community going where we could all write some stuff for a live group and use some sort of electronics if we wished. As we talked more, we all got excited by the idea and started working as a collective in this endeavor. The idea was to sort of build a fire to help other things (including ourselves) catch. In the future, I want to see The Echo Society be a source of creative possibility. I want to keep putting on concerts twice a year, to write for them and to grow the infrastructure to enable other inspired works (musical and visual) to be created and shared. I also would love to see us do more community outreach projects, involving young students and organizations where we can give back and continue to see what’s possible within the artistic community of L.A.

You’ve worked together with Academy Award-winning film composer Mychael Danna on several hugely successful films. What was your experience like under his mentorship?

RS: It was pretty amazing. Mychael is a stellar composer with a unique musical voice and perspective. That is on top of being a very smart and giving human being, from whom I learned so much in all areas. Working with him was the chance to be of service to him in his own work, which was so insightful and educational, which in turn supported me in my own evolution. It has been a huge impact on the composer and person I am today. I’m extremely fortunate and grateful. Our collaborations are very special to me.

Last year you scored the global ad lunch for Apple’s Iphone 5 “Everyday” campaign.  What was your inspiration behind the iconic piano music and how has composing for advertisements differed and/or overlapped from your experiences scoring for films?

The inspiration was the desire to be simple and organic. “What comes from the heart reaches the heart.” I turned off the click track (after some long conversations in Berlin with my friend Dustin O’Halloran about writing without click), and just tried to flow. The track needed to sound effortless so I tried to not go down any rabbit holes of overthinking. I have found that a lot of my best work is when I just get out of the way and not overly critique or produce. It has taught me a lot about creating music in general: simple is usually best.

On your tumblr, announcing the release of your concept album, 1979, you wrote, “Before music was such an easily traded commodity, it was often an experience to which people gave their full attention. Let’s bring that experience back. Let’s respect what music is worth.” What value does music hold in your life and why has music been your outlet for storytelling?

Benjamin Wynn: I knew at some point in high school that I wanted to focus my life on music, and I haven’t wavered since, so you could definitely say that it holds a huge value for me. Music has the ability to express feelings and emotions that I find are often hard to express in words. It seems to me that it has the ability to hit us in an area of our brains just below words and logic. I think I gravitated towards music early on because I loved the way it could make me feel, and I thought that I could add to the musical conversation in that regard.

You and Jeremy Zuckerman formed the music and sound design company The Track Team in 2004. As a dynamic duo, you received nominations and awards for the score of Nickelodeon’s hit TV show Avatar: The Last Airbender. How has your friendship evolved since and how has your partnership impacted your career and overall musical discovery?

BW: I met Jeremy while we were studying music at CalArts. We became friends due to our mutual interest in music and using computers to make and control sound, and we’ve been friends and partners in some fashion ever since. We share the same excitement for learning about music and also in using technology to shape our discoveries. When one of us learns something we usually share it with the other, which has been huge in terms of growth.

What does being a member of The Echo Society mean to you and what has your experience with the group been like?

BW: The Echo Society means a few things to me. Musically, it’s about having a platform to try things that I wouldn’t normally get to try. It’s a platform for experimentation, learning and growth. But it’s also about building and fostering a community. All of the composers in the group could have easily been competitive and petty with one another, as we’re all around the same age and in the same field. I am so unbelievably happy that we’re not. We’ve all chosen to build something together, instead of tearing things down, which has proven so much more powerful. When one of us grows, we can all grow together. This is very exciting. This is what it’s all about.

Before the Emmy awards and your work on the score for Avatar: The Last Air Bender, your first job in the music industry was shrink-wrapping CDs. What is your personal advice to all the shrink-wrapping CD employees and burgeoning artists out there now chasing a similar dream and career you’ve worked your way up to?

Jeremy Zuckerman: 1) Pay your dues. 2) Know when it’s time to move on. The shrink-wrapping gig was a good introduction to the music industry and I discovered a lot of really crazy music there. But I knew when it was time to leave. Same thing with my first internship for a fantastic post-production facility. It was very valuable for a while but I chose to leave to attend CalArts and follow a path more aligned with my passions. This happened again when the Avatar: The Last Airbender opportunity materialized. I had to choose between taking the gig or continuing a secure and profitable job working as a composer/engineer at a music house.

Everyone has his/her own path; there really isn’t a recipe that will work for all unfortunately. If you talk to 10 composers, you’ll get 10 different answers on how they wound up where they are now. Having said that, there are a few things that I think can help the odds. I think moving to Los Angeles is paramount. Additionally, I’ve always pushed myself to keep learning and working on my musical skill set. Though there are specific skills intrinsic to scoring, I think it’s important to study more broadly than the realm of film composition when working on chops. Whether it’s working on concert music, sonic art, electronic music, production techniques, songwriting, etc, it’s the left-of-center tools in one’s wheelhouse that gives her/him a unique voice and ultimately will make her/him more valuable.

When you wrote the score to recently released Legend of Korra, what journey did you hope the stylistic mash-ups, rhythmic orchestration, and luscious melodies would take your audience on?

JZ: I was lucky with Korra in the sense that the setting was so unique and rich; it demanded a really interesting musical vocabulary. Also, the showrunners Bryan Konietzko and Michael DiMartino have a long and profound creative relationship with me. They provided some great ideas and let me run as much as I wanted with them. They don’t use any temp music, so a unique musical style emerged very naturally.

A score must be right for the project. Most projects demand the use of a previously established genre to varying degrees. With Korra and Avatar that’s not been the case. The musical style has always been dictated by the narrative, setting and visual aesthetic. The depth of that material has been really inspiring.

To finally answer the question, I try not to think too much about expectations when working (with varying degrees of success)! The goal is for the music to function perfectly so that it makes the story richer, more emotional and more relatable to the audience. I do hope the music turns out to be a wonderful listening experience on its own but I know that film music is first and foremost there to service the picture.

On June 29, the Echo Society had its second Solstice concert event. How has the group evolved since its premiere Winter Solstice concert in December and what do you see on the horizon for the collective?

JZ: I think we’re all starting to inspire and push each other. It’s really amazing to have a community like this. I think it’s imperative for an artist, but greatly lacking in Los Angeles. Composers can live extremely solitary and entropic lives. If you look at all the greats in all different disciplines, you’ll find that most of them were part of a community of artists, challenging and influencing each other. It’s very hard to stay inspired without new creative stimulation coming in. So… I think outwardly, the bar has been raised with the production and music between the first and second concert. And less obvious but perhaps more important, the feeling of community between the composers and musicians has strengthened.

As to the future of the Echo Society, there are so many great ideas being thrown around. From community outreach to doing some shows outside of LA to eventually providing some kind of artist residency… Personally, I’m going to try to keep growing creatively with each concert and I’m excited to build a body of concert work. I can’t tell you how fortunate I feel to be a part of this collective. It’s been such a healthy, positive experience. Good stuff. 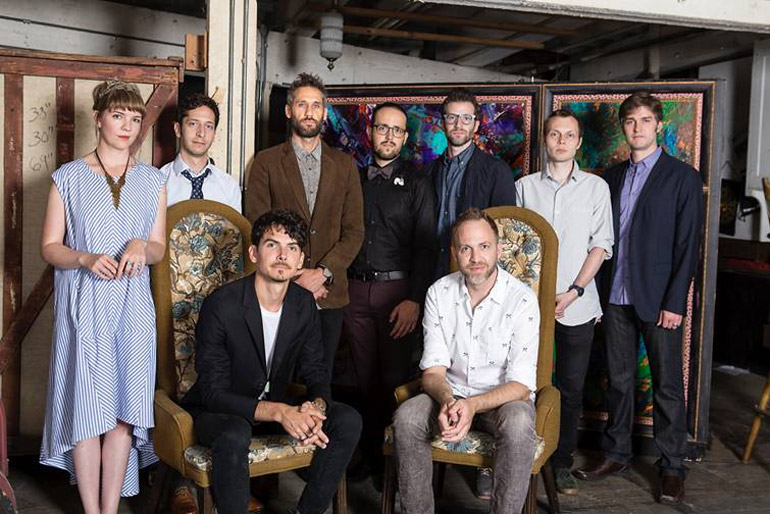