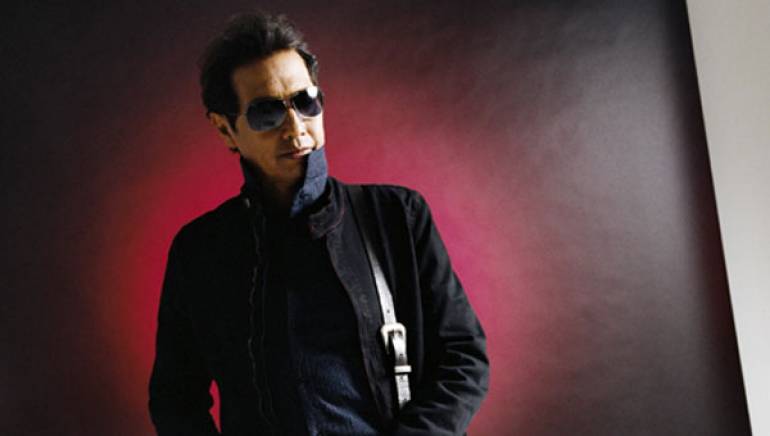 If life was fair, Alejandro Escovedo would probably be dead or in jail—and he would also almost certainly be recognized as one of the greatest songwriters in the world. A last man standing of not just bands, but entire scenes and genres, Escovedo has survived nearly thirty years of near misses—with fame and death alike—to emerge, with a gracious sense of understatement and a punk-rock grain of salt, as one of the truly great artists of the day.

One of the youngest of 12 siblings in a musically gifted Mexican-American family that includes percussionists Pete and Coke Escovedo and niece Sheila E, Escovedo grew up in San Antonio and later Orange Country, California. In the mid-70s, he drifted up to San Francisco and formed the Nuns. A seminal band of the nascent West Coast punk scene, the Nuns opened the Sex Pistols’ last show, where Escovedo got to see the self-defeating circus aspect of punk rock first hand. Later, in New York, he played guitar for cowpunk pioneers Rank and File, then moved to Austin where he formed the critically acclaimed True Believers with his brother Javier.

More than any other of Escovedo’s bands, the True Believers seemed poised to reach a larger audience. They landed a deal with EMI/Rounder, and Los Lobos, early and enthusiastic supporters, offered the band the opening slot on a long tour. But long stretches on the road allowed the band to delve into rock and roll decadence, which took a toll on the relationships inside and outside of the band. In a label merger and shuffling, the True Believers were dropped before the release of their second record.

In 1989, Escovedo—bandless and working as a clerk at Austin’s Waterloo record store—took his first tentative steps as a solo artist. He formed two distinctly different bands—The Alejandro Escovedo Orchestra, a free-form collective of some of Austin’s best musicians, and Buick Mackane, a raucous, guitar-heavy combo with a name cribbed from T. Rex. Escovedo played around town constantly over the next couple years, experimenting with different styles, genres and lineups. It was a period of extraordinary growth in Escovedo’s skills as a songwriter and performer.

In 1992, he released the acclaimed solo debut Gravity that welded the raucous energy of the True Believers (“One More Time,” “Pyramid of Tears”) with the lovely and fragile melodies of songs like “Gravity/Falling Down Again” and “She Doesn’t Live Here Anymore.” He followed it with the intensely personal and lyrical Thirteen Years, a harrowing and heartbreaking look at love, death and loss propelled by mournful cello and violin and Escovedo’s unaffected, haunting voice. For the world outside of Austin, it was the announcement of a staggering talent.

In 1996, Escovedo released With These Hands, his third great solo record in a row, and then two revealingly titled albums—More Miles than Money and A Man Under the Influence. Out on the road, touring heavily, he lived up to both.

It was not a pace that anybody could sustain, and in April 2003, Escovedo collapsed after a show in Phoenix and was rushed to the hospital. Ever the overachiever, Escovedo was suffering from severely untreated Hepatitis C, cirrhosis and internal hemorrhaging. Recovery was long, slow and expensive—especially for a gifted but broke musician with no health insurance.

Friends, fans and family contributed to offset the costs with a series of concerts and a tribute album, Por Vida: A Tribute to the Songs of Alejandro Escovedo, featuring the likes of Steve Earle, Lucinda Williams, Los Lonely Boys, and Escovedo idols Ian Hunter and Lenny Kaye. It was a gesture of tremendous caring and generosity that revealed not only the greatness of Escovedo’s songs, but also the breadth of respect and admiration he commands as a songwriter.

After a period of reflection and recuperation, Escovedo returned with 2006’s somber The Boxing Mirror, produced by the Velvet Underground’s John Cale, and last year’s amazing Real Animal, produced by the great Tony Visconti.

On Real Animal, perhaps more than any other album, Escovedo seems at peace with himself and comfortable with who he is as an artist.  The album looks back—lyrically and musically—at his entire life in music, going back all the way to the Nuns with the sneering “Nuns Song.” The crisp acoustic rocker “Sister Lost Soul” balances the introspection and strings of his solo work, and “Always a Friend” is the kind of brilliant, melodic rock song that seems to drop from the Austin air like grackles. It’s the kind of song, and album, that reveals all the promise and potential of Americana to carry on the great traditions of post-Dylan rock and roll, and these days Escovedo does it better than nearly anyone.

It’s no surprise that Escovedo has been nominated for Artist of the Year by the Americana Music Association, with Real Animal up for Album of the Year. What is surprising, though, is that Escovedo is around to receive the recognition he deserves. Through sheer faith, determination and talent, Escovedo has managed to beat the odds. He has lived to tell the tale. What could be more rock and roll than that?