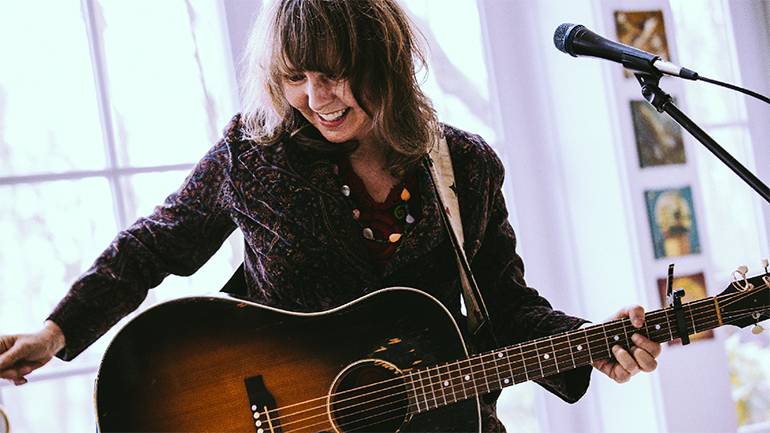 Amy Rigby has been writing songs and performing music since the late 70’s, first as the drummer of a fleeting post-punk band The Stare Kits before forming the proto-cowpunk ensemble, The Last Roundup and, later, the folk-pop trio The Shams. She launched a solo career in the mid-90’s and has gone onto to release a string of critically acclaimed albums and toured extensively, both as a solo act and as part of a duo with her husband, British punk alumnus Wreckless Eric Goulden. Songwriting and performing have been her driving passions throughout her entire life.

Rigby first decamped to New York City from her native Pittsburgh in 1976, ostensibly to immerse herself in a career in fashion and art. But it was her lifelong love of music that truly compelled her. Arriving during the nascent days of New York’s fabled punk scene, the do-it-yourself ethos of the movement spurred her to cross the divide between music-lover and music-creator. She has since become renowned for a singular brand of songwriting that is playfully crafted but lyrically very direct. Be it whimsical nostalgia of “The Summer of My Wasted Youth” and “Dancing with Joey Ramone,” the wryly candid “Are We Ever Gonna Have Sex Again?” (addressing the travails of parenting and middle-age) or the bluntly political “The President Can’t Read,” Rigby’s songs are fueled with a rich gift for storytelling, expressing her life experiences both sweet and sardonic.

In 2019, Rigby published her memoir, Girl to City, documenting her life as a professional musician and songwriter. She was in the process of touring to promote the book until the pandemic put all such engagements on hold. We reached out to Rigby, recently, to see how she’s faring under the current circumstances. Unfortunately, we learned that her husband, Wreckless Eric, had contracted the virus, but was in the process of recovery. Filled with resolve and encouraged by heartfelt notes from their fans, Rigby and her husband are fighting the good fight. Here’s what she had to say

I lost my sense of smell, my husband has had enough symptoms that we were able to get tested. His was positive, mine negative. There is so much not known about this virus. We are on full lockdown now. In one way, it’s comforting to know why he’s been ill for weeks, in another way it’s terrifying and just hope he’s on his way to getting better.

I’ve lost all my gigs through July and don’t know what the rest of the year/future will be, after many years of structuring my life around traveling for gigs. But on the plus side, it feels like a luxury to spend time at home that isn’t in-between touring. We live in a semi-rural area and can get outside safely. Trying to embrace the positives.

What’s helping you stay focussed on your songwriting during this time? Are there any exercises you practice to keep in the creative mindset?

I write regularly: journal, blogging/essays, so that plus songwriting is just part of life for me. I always feel better when I’ve managed to communicate an experience I’m going through in some form of writing.

I’m also enjoying having time to learn other people’s songs. It’s sad that this month it’s often prompted by them dying. But there’s beauty in communing with the spirit of an artist through their words and melodies and I guess it’s part of the reason we write songs - to create something that exists outside of ourselves, that connects with others and takes on a life of its own.

I’ve learned we have an infuriatingly slow internet connection, it’s the fastest available in this upstate New York area here so I just have to live with it but it’s hell for live streaming/uploading.

The loss of lives and the fear. Hearing about Adam Schlesinger, Hal Willner and John Prine passing away from this virus knocked the wind out of me: these people are contemporaries but also creative heroes who helped show me what’s possible. Worrying when I know a friend has it. Worrying about my daughter and brothers and friends who live in New York City, the epicenter. I want to tell them to come up here to be safer but - we’ve got the virus in our house. And the point of Stay At Home orders is to stop things spreading.

Crying, playing a 45 of Tommy James “Draggin’ the Line” really loud, and going out into nature. I’m lucky to live in a beautiful part of New York’s Hudson Valley. But I worry about how our small town, that was just experiencing a burst of growth and creative renewal, will weather a depression. I think we will really learn what community means as we will need to help each other to come out the other side of this, already the government is letting people down (where are small business loans for truly small businesses, a lot of our local shops have been shut out and told the money is gone). Supporting our local small businesses by ordering foor or drink to go, buying gift certificates, subscribing & donating to newspapers and journals and community radio that keep us connected is at least something I can do right now.

See Tommy James (above). Old pop 45s played at top volume - it is the visceral experience of the needle drop, the magic of music coming out of a piece of vinyl that takes me to a simpler, happier place. Of course I aim to listen to new music but it’s almost more like taking medicine because it contains all that is unsettling about life right now…

You recently released your memoir, Girl to City, about your journey as a singer, a songwriter and a traveling, touring musician. What did you learn from the experience of writing this book?

I learned how lucky I am to be a songwriter. Songwriting is often alchemy - more transcription than the hard work of putting one word after another, which is what prose writing requires. Not to say songwriting doesn’t require a huge amount of dedication. But the rewards of writing - without the benefit of melody, harmony, rhythm and musical nods and references plus the bonus of collaboration that all go along with songwriting, - have made the lonely, sustained effort of writing my first book worthwhile: it helped me understand and value the experiences I’ve had as a musician and songwriter. It gave me more confidence in myself as an artist.

I want to play a show that has it all: sweating, rocking, tender moments; anger and joy shared with a crowd, and just hugging everybody. That might be a dream that’s a long way off though.

If you’re at liberty to say, what are you working on these days?

I’ve been turning my memoir Girl To City into a podcast, each chapter an episode, one episode a week. I was too busy booking a tour and setting things up before the book came out to do an audiobook and since I’m not on the road now, as I’d hoped to be, I’m able to enjoy putting the stories in the book together with music from my catalog. It’s a chance to learn a new form and also lets me mine my musical past. As artists we’re always looking forward to the next thing and creating new work, leaving the archiving and reframing to others but here’s a chance to do some of that myself.

Know you’re not alone. Appreciate how lucky we are to be able to express what the whole world is going through, but don’t put pressure on yourself to do it right this minute. The experience will find it’s way into your writing, and make it richer. I hope.

We help bring people together. I started a thread about story songs like “The Gambler” right after Kenny Rogers died, and it was stunning the passion and interest people showed in posting their favorites. Songs become a part of the listener, and in the case of popular songs many many listeners and we all share in the experience created by the songwriter. What a beautiful thing.

What role has BMI played in your journey thus far?

It was encouraging to receive my BMI payment a bit early back in March. First of all, the money helped, after all my touring for March and April had just been cancelled. But it was also psychologically helpful, a kind of acknowledgement that songwriting is my profession - that I belong somewhere, through my assocation with BMI who I have been with since I started doing this. The company has grown so much since back then and sometimes I wonder where I fit in with my quirky, cult career, but in the end BMI is made of individuals and they are there for and because of us writers.