Posted in MusicWorld on February 11, 2008 by Bruce Britt 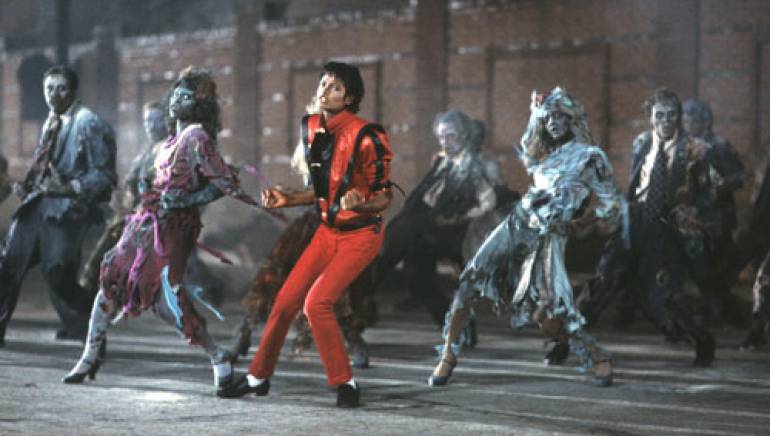 The year was 1982 and Michael Jackson was feeling the pressure. Best known as the barely pubescent leader of the Jackson Five, the singer had finally forged a mature image with his Grammy-winning 1979 solo album, Off the Wall. But ever the perfectionist, Jackson entered Westlake Studios in Los Angeles determined to surpass Off the Wall and its 7 million copies sold. With the music industry gripped in a sales slump, producer Quincy Jones warned Jackson against being too hopeful.

“I remember Quincy saying ‘the record business is not what it was a couple of years ago, and if we get six million [in sales], I’m gonna declare that a success’,” keyboardist Brian Banks recently told the UK’s Daily Telegraph.

The album Quincy Jones reportedly handicapped was Thriller, Michael Jackson’s future-funk masterpiece that today boasts the distinction of being the best-selling album of all time. To date, Thriller has sold so many units that its worldwide tally is hard to track, with estimates ranging from 67 million to 104 million copies sold. In commemoration of this historic achievement, Sony Music has released Thriller 25, a special anniversary edition featuring a remastered version of Jackson’s classic CD, plus a music video DVD and bonus remixes showcasing contemporary artists like Kanye West, will.i.am, Fergie and Akon.

Just as Off the Wall and Thriller reinvented Jackson, so has the singer’s anniversary disc signaled a rebirth. Within two weeks of its February 2008 release, Thriller 25 had shipped well over 1.3 million units internationally. According to Sony Music, the album was charting Top 10 in virtually every market in the world, with the majority of countries reporting top 3 rankings.

Though Thriller’s groundbreaking achievements have been well examined, the facts bear review. Spending 37 weeks at #1, Thriller ranks among only three albums ever to remain in the top 10 of the Billboard 200 chart for an entire year. Not only did Thriller help Jackson win a record-breaking eight Grammy Awards in 1984, it was also the first album ever to yield seven Billboard Hot 100 top 10 singles. Radio staples like “Billie Jean,” “Beat It,” “Thriller” and “Human Nature” helped bring African-American music back into the mainstream for the first time since disco’s 1970s heyday. Thriller’s music videos set the creative bar so high that many pundits credit the album for transforming MTV into the global phenomenon it is today.

In all, Thriller altered the pop landscape so dramatically that it seemed to separate pop history into two epochs: B.T. (“Before Thriller”) and A.T. (“After Thriller”). The album’s cohesive blend of fizzy pop, hi-tech funk and tart mainstream rock nearly transformed Jackson into a musical genre unto himself. For the MTV generation, Thriller’s impact was nothing short of devastating. The album has been cited as a powerful influence on contemporary artists like Mariah Carey, Usher, Britney Spears, Justin Timberlake, Beyonce, Missy Elliott, Kanye West and countless more.

“All the brilliance that had been building inside Michael Jackson for 24 years just erupted,” Quincy Jones told Playboy magazine, and many critics agree that Thriller is Jackson’s finest hour. Rolling Stone called the disc, “a zesty LP whose up-tempo workouts don’t obscure its harrowing, dark messages.” The New York Times described Thriller in almost messianic terms, hailing the album as a hopeful sign that “the destructive barriers that spring up regularly between white and black music — and between whites and blacks — in this culture may be breached once again.”

In hindsight, almost everything about Thriller seemed to point to the album’s success, from its exciting title to the name of the Sony Music subsidiary label the disc was recorded for. With its world-beating sales, innovative songs and groundbreaking videos, Thriller remains a truly epic recording.