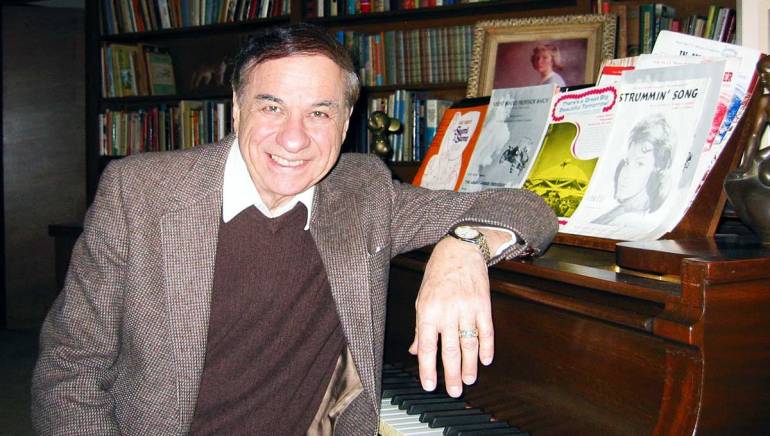 Richard Sherman and his brother Robert, collectively known as the Sherman Brothers, wrote the music and lyrics for some of the most beloved family films ever made. Both during their time as Disney Studios staff songwriters and after, the pair were unstoppable. The Sherman Brothers penned the songs featured in Mary Poppins, The Jungle Book, Chitty Chitty Bang Bang, Winnie the Pooh and many more. Two-time Academy Award winners, GRAMMY recipients, and BMI’s Richard Kirk Lifetime Achievement Award honorees, the Sherman Brothers’ importance and omnipresence in the world of film music cannot be overstated.

While the entirety of prolific BMI composer/lyricist Richard Sherman’s expansive body of work is worth investigating, 2014 marks a special anniversary for his most important and recognizable song: “It’s A Small World” turns 50 this year. The song was commissioned to accompany Disney’s inventive boat ride attraction at the 1964 New York World’s Fair, and has since been translated into countless languages and has become an international anthem for world peace. To celebrate the half-century of children joyously singing, Disney recently launched a commemorative fundraising initiative for UNICEF, as well as a website for fans around the world to record and share their very own version of the song.

Richard Sherman recently spoke with BMI about “It’s A Small World,” its legacy and his favorite songwriting projects, along with his inspiring advice for emerging songwriters and composers.

How did “It’s A Small World” come to be?
My brother and I were the staff writers at Walt Disney Studios for about 10 years. In 1962, the Imagineers, the people who create the rides, were doing a series of four exhibits for the New York World’s Fair. One of the exhibits was a salute to UNICEF, to the children of the world. It was to be a ride, where people would get into boats and travel past these automatic dolls who would be singing the national anthems of the various countries as they went through.

Robert and I were doing most of Disney’s film and television songs that came out of the studio in the 1960s. We were called down to a sound stage where they had a working model of what the Small World ride was going to be. It was obviously not a boat ride, it was a serpentine walk through. Bob and I were walking through this with Walt Disney, who was telling us about it, and it became obvious as we walked through it that hearing these various groups of children singing, it was a total mess, a cacophony. Walt said, “Kill the sound, kill the sound,” and all you heard then was the buzzing and clicking of the little mechanical dolls. I remember vividly, he looked at us and said, “Okay fellas, you’re going to write a simple little song that’s going to explain what this is all about.” It was an assignment. He said: “I want it to be a simple song that is a salute to the children of the world because they are the hope of the future. They have to learn as youngsters how to live together and to share the world because that’s all we’ve got. The small children have to learn to share the world and live with respect. But don’t get preachy. I want it to sound like a folk song. We’ve got to translate it into lots of different languages.”

Bob and I were saddled with this responsibility because here was this multi-million dollar toy that Walt had created and we were given the assignment to write a simple song. As few notes as possible. We had to get a catchy title. As we worked back in our office at the studio, we said, “Well, Walt said the small children of the world are the hope of the future. What’s the key to that? Let’s learn to live together, not kill each other, after all we live in a small world, that’s where we live after all, small, all, ooh! That rhymes.” Then we said, “It’s a small world after all, let’s not kill each other! No, we don’t have to say that, it’s a small world after all… let the mind say the rest of it.” So that’s what we came up with and that’s how we got started.

The song is now a ride at every Disney park and an international anthem of unity. At the time of its creation, did you ever think it would be as important and lasting as it has been?
We never dreamed, in our wildest imaginations, what it would become. Walt had plans for this thing, but we didn’t know this. He wouldn’t let us give our royalties away. We wanted to donate them to UNICEF. Walt said: “Don’t ever do that. I don’t want you to do that. This song is going to put your kids through school.” We said, “What are you talking about?” He said, “If you want to make a contribution to UNICEF, do it any time you want. But don’t give away your birthright.” And so we didn’t, and thank God, it’s the world’s most performed song. It’s logged over 50 million performances over the past 50 years in Disney parks alone. It’s considered the most performed song on the planet, because it never stops playing. It has been translated into every language on the face of the earth, school children know it no matter where you go, and it’s a very gratifying thing to know that it’s a prayer for peace.

You’ve worked on countless Disney classics; what was your favorite Disney project?
It has to be Mary Poppins. Mary Poppins was our magnum opus. The books contained no plot lines, just these wonderful adventures that were created by the author, Pamela Travers. We, with a couple of scriptwriters in the studio, came up with the storyline that everybody thinks of as the Mary Poppins story. A story where the Banks family was in trouble and Mary Poppins appears and teaches them life lessons about living together. Bob and I wrote all of the music and lyrics for the picture, of course, and it became our first gigantic hit. It was an Academy Award winner for best original score and best song for “Chim Chim Cher-ee.” It became a major credit for us. Millions upon millions of albums were sold and it’s also now celebrating its 50th year. That was a lucky year for us, 1964.

How was being a consultant for Saving Mr. Banks? Was the version of the story presented in the film pretty close to real life?
It was wonderful! Saving Mr. Banks is the true, honest story of what we went through to get Mrs. Travers to finally say yes, you can do the movie. She was very protective of her stories, and we had created a different storyline. She didn’t want to have any music, she didn’t want to have any dance. If you read the books, Mary Poppins is not a very lovable character. We wanted a character that everybody could fall in love with and care about. Mary Poppins shows the Banks family how to have fun together and how it’s important to share and how a spoonful of sugar can help life’s medicine go down! How you have to feed the birds, it only takes tuppence. These are the metaphors, meaning, it doesn’t take much to give love and kindness, and how a happy attitude helps a tough job become easier. Walt knew what he was doing; he was the best storyteller of the last century. And he gave us the opportunity to show our stuff.

Are there any new family film composers we should have our eyes on?
Oh, there are many talented newcomers but I think the Lopezes, who did the songs for Frozen, are hugely talented. I really love their work. And of course, Alan Menken has been turning out one wonderful song after another. I’m still in the business too, you know. I just did a stage version of Jungle Book which I hope to revive again. We did it in Chicago and Boston and it did very well. And I’m working on another project, the 1971 film Bedknobs and Broomsticks as a stage musical. It’s really exciting.

What advice do you have for up and coming composers and songwriters for film?
No matter what you do, give it everything you’ve got. That’s the first thing. The second thing is to take every opportunity you can to expose your talent. So that no matter what it is, a young filmmaker’s documentary, an experimental animated project, no matter what, give it everything you’ve got. Get your name out there, get your work out there. You have to keep persisting because it is a tough, competitive world. But you have to keep every opportunity going and keep all doors open. They say luck happens when preparation meets opportunity, so keep your eyes open for the opportunities.

Write all the time, even if it’s just for yourself. Writing songs for movies or the stage, you have to come with ideas that fit the story. Story is the main ingredient in any dramatic piece because no matter how good you are, you still have to service the story and the characters at hand. My brother Bob and I, for years, wrote what the story required. If it was an 1885 western, we wrote western style music. If it was a 1912 English story, we wrote that. If it was a German story that took place in 1944, we wrote that too. No matter what it was, we wrote it. But we were true to the storyline and the period. You can’t be a one-trick pony. You must be versatile. Versatility is one of the keys to success.

BMI’s Music World magazine’s profiles of you and your brother date back to 1964. Can you tell us about your lasting relationship with BMI?
I think I’m the oldest living BMI songwriter member (laughs). My brother Bob and I joined BMI in early 1952, so that’s 62 years. I don’t think there’s a single member with more longevity. It was at the time when ASCAP was the big company, our dad was a member of ASCAP but he couldn’t get us in. You had to have a couple of hits in those days. We were just starting to get songs published. Who was going to collect our performance royalties? ASCAP said you can’t join us. BMI welcomed us with open arms. They said, come in and we’ll pay from the very first penny. You guys join us, and we’ll treat you right. And they did. Later on when we became hotshots, ASCAP began to court us and we said nooo, no, no, where were you when we needed you? I’ve been a loyal member of BMI and am very grateful for the wonderful work that they do for all writers and all publishers. They’re a great organization. I joined it back when Bob Burton was the President.