Posted in MusicWorld on February 8, 2016 by Abby White 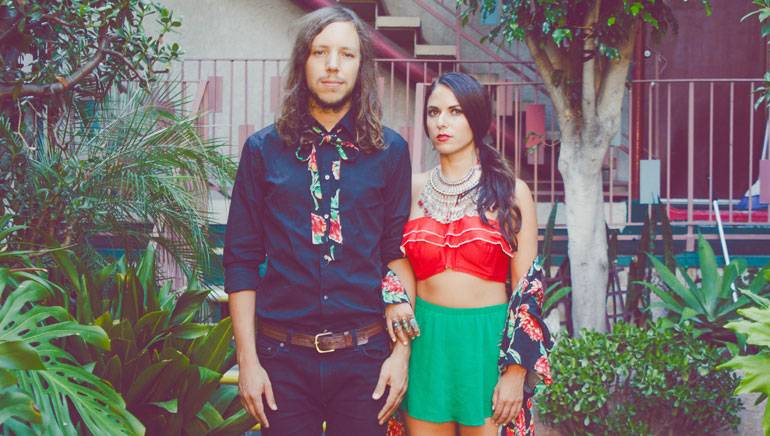 In conversation, Escondido’s Jessica Maros and Tyler James sound alternately like an old couple, best friends, bandmates and exes. And at times, they have been all of these things, bound by the desire to make music together.

Their first record, 2013’s The Ghost of Escondido, immediately established the duo as critics’ darlings. Enchanted by Escondido’s dusky, Americana-tinged indie sound, journalists dubbed their music “desert rock,” a term that has followed the band ever since. Subsequent appearances on Conan and Nashville raised their profile even more, coupled with a heavy touring schedule with the likes of Lord Huron, Pokey LaFarge, Wild Cub and Kopecky.

As anyone who’s been in a band knows, the strain of constantly writing, recording and touring together can take a toll on even the strongest relationship, and Maros and James wisely took some breathing time to explore other projects.

“We put out our first record on our own, and immediately started a band,” James explains from his home base of Nashville. “We spent every day together for years as business partners, best friends … it’s this weird relationship. We made our second record and we needed some time apart to do other things. And after all that, we realized we still loved being in a band and making music together.”

Their sophomore effort, the forthcoming Walking With a Stranger, evokes both the tension of a strained relationship and the hope of resolution, especially in the somber, stripped-down ballad “Try,” one of the first singles from the album. “Heart Is Black,” on the other hand, features a defiant protagonist with a more contentious spin on love, brought to life by Maros’ bewitching vocals that are perfectly complemented by James’. While the songs on their first album – recorded live in the studio in one day – had a more cinematic, Spaghetti Western feel (which was no accident, as both Maros and James are big Ennio Morricone fans), “Heart is Black” introduces shades of `90s alternative rock, accented by a driving rhythm akin to a train going off the tracks.

“When Jessica shows up with something that sounds like a `90s grunge song, I’m not going to try to make it a Morricone recording,” says James. “For this record, we spent a little more time digging through the arrangements and the sounds. There’s probably a lot more going on with this record, more complexity with arrangements and approach. I think this record is more alternative.”

James says that Maros usually starts the songwriting process, often sending him voice memos of ideas before the two meet in person to write the rest together and record a demo, which James arranges and produces. For Maros, songwriting often starts in a very solitary place, a sharp contrast to the scheduled co-writing meetings typical of Nashville’s Music Row hitmakers.

“I really want the initial idea to come from this lonely place,” says Maros from her home in Los Angeles (she splits time between there and Nashville). “When you’re in a room with someone, you can’t ever get that vulnerable. So, I prefer to keep that mystery, and that vulnerability, alone. I like having my own time with it, and bringing it to him, and it kind of evolves.”

“It sounds more like Escondido when Jessica starts it and sends me her voice memo, whether it’s a chorus or a verse or just come chord progressions,” James adds. “She uses less chords than me, typically, so it’s usually more simple and dark, and I can kind of take that and run with it.”

Having the opportunity to co-write and bounce ideas off each other is integral to Maros’ and James’ process, though they also heed advice from a third party. “Edit ruthlessly,” Maros says. “Jon Brion said that – I’m a huge Jon Brion fan. And ironically, that’s the thing I don’t do,” she admits, laughing.

With their second album on the horizon and an intense touring schedule in the works – and high profile fans like David Lynch and Lena Dunham, with whom the duo wrote a song for the upcoming season of Girls – Escondido is still establishing their foothold in the Wild West that is the modern music industry. With a sound that doesn’t fit squarely in one genre, Escondido isn’t quite sure where they fit.

“It’s so frustrating now, as artists,” Maros says. “I think, in general, we are an alternative, indie rock band, but we have Americana-sounding songs. Like, where would you put Fleetwood Mac these days? Rock? Alternative?”

Speaking of Fleetwood Mac, many fans have wondered if Escondido’s easy-on-the-eyes duo is more than just friends, a topic which they approach somewhat cryptically. “It’s one of those things, the stereotypes between a female and a male in a band,” Maros says. “People always think they’re together, and it’s frustrating, like can’t a man and a woman be in a band and be cool with each other and have normal lives?”

“But Jessica and I did date,” James interjects. “It’s such a long story, but we had to choose. And we’re committed to this. We put records out on our own label, we’re making music together, we’re traveling together, we’re making every business decision together. Even though we have two different, strong personalities – and opinions – it’s better.”

“That’s so true,” affirms Maros. “We’re around each other 24/7 – it’s like more than a marriage. We’re really lucky to be in a band together because we work out our problems and it ends up being really good. It’s more than a friendship, a creative partnership and a business partnership.”

Maros and James have also been in a relationship with BMI for a long time. “They’ve been great,” James enthuses. “They’ve always been super supportive of us financially and creatively. With resources and connections, they’ve been great.”