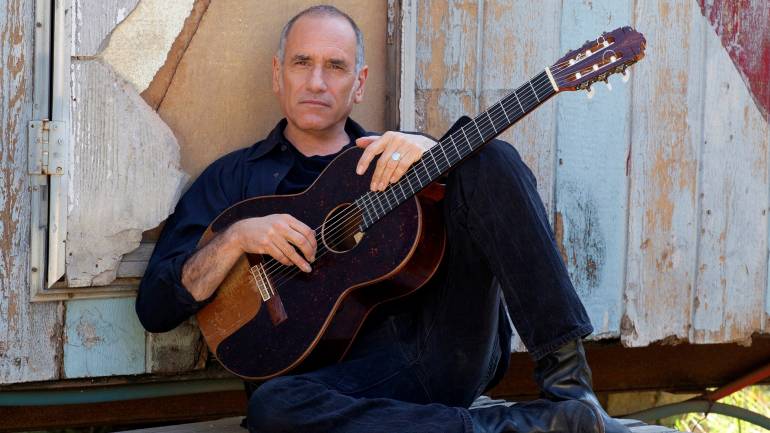 No one can say that Israeli folk-rock singer-songwriter David Broza doesn’t take his job seriously. His new album, East Jerusalem/West Jerusalem, which is co-produced by the legendary Steve Earl, takes on the immense creativity among Israeli and Palestinian musicians in a time when so many other projects fail to bring the two cultures together. The scene of the powerful endeavor is a small recording studio on the Arab (east) side of town, and not only does the album tell the story of how healing music can be, Broza enlisted an Arabic filmmaker and friend, Issa Freij, to help him make a documentary that visualizes the dynamic eight-day process of the making of the record.

BMI caught up with the troubadour to ask him a few questions about his extraordinary career, life and aspirations before the Los Angeles premiere of the film on December 8 at the Skirball Cultural Center.

Tell us a bit about the film. How did it come together and what message were you hoping to convey?

The film East Jerusalem West Jerusalem was created around the making of the album carrying the same name. For the past 16 years I have been coming to the studio in East Jerusalem to visit my friends, who are mostly musicians and artists from the area and are leading Palestinian artists. We get together for BBQ’s and parties and even just to relax together. Occasionally we write music together and record new music. However, I hadn’t done a project where I would bring together in the studio, my Israeli musicians from my band, along with the Palestinian ones. In all the years that I have been coming to the studio, I could never convince my friends and musicians to come with me. So I thought I would put together an album where they would have to come and record with me at the studio and I would also have my Palestinian friends play. Since East Jerusalem is the Palestinian side of the city, Israelis don’t find themselves venturing there for an afternoon or to walk around. So this was not an easy task, even with the great offer to have them record with me. I had to put several ingredients together for this to work out. An important one was the food. I called in on board the best chefs in the region; Israeli and Palestinian chefs who were to prepare the most delicious meals at the end of every day and at mid-day as well. This made it somewhat easier to convince everyone. Another ingredient was the producer of the album. I wanted someone from the USA who would know now to blend the different style of instruments and melodies and create a Middle Eastern Americana sound….. This was to be Steve Earle. He was perfect for the project. He had never been to the region and he was very learned about it. He even wrote songs about it.

The film captures the eight days and eight nights of the recordings and the monologues of some of the participants. The candidness and integrity of all involved comes through with a very sober message and an evocative story. In short, this film sheds a little light on the endless power of music to bring people together and help build the bridges needed in order to begin the understanding one another.

You’ve said that you’re not well known in New York. How does it feel to have this film making its LA premiere in December? Do you think it will change your profile here in the states and how so?

My prime markets in the world are, first of all Israel, which is where I started my career and have numerous hits. So when I came to the USA and actually landed in NYC, it was clear then that I would have to start from scratch. I do have recognition amongst the Jewish and Israeli communities in the country. However NYC, L.A. and other major cities in the USA have become markets that I work in. But I have not had any sustainable hits with the six records that I released here. Having the film premier in LA, in the Skirball Center, is great. I look forward to showing it to as many people as possible. Hopefully some of the draw will be from the music and film industry. In March, the film will show at the Lemlie Theaters. So I am hoping it will elevate my presence in the market.

It’s evident by your work that you believe in the power of music to heal and bring people together. How has this affected you as a music creator?

I know that music is a great tool for bringing people together as well as helping the sick and injured and emotionally down… I have played in front of people in bomb shelters under fire, for injured people, sick, and all kinds of unhappy situations. It has been a source of happiness and inspiration for me.

What’s the biggest obstacle you face in being an Israeli musician?

I am not sure there are any real obstacles at being an Israeli musician. Of course, a singer who sings in Hebrew has a major handicap and obstacle. After all, the language is not only foreign to the American listener, it is a language that sounds like no other. For that reason I have researched and worked with American poets and have recorded 6 albums in English so that it can cross over to the average listener.

If you had to pick one song that says the most about you, which one would it be and why?

The one song that is probably the most known and one that’s still relevant, oddly enough, is the first song I ever wrote. It was composed to the lyrics of Israeli poet, Yehonatan Geffen. This was written to commemorate the 1977 visit of Egypt’s president to Israel, Anwar Sadat, when the peace process started.

How have other countries and cultures influenced you as a person and as a songwriter?

I have lived in Spain and that has had a deep effect on my music sources of inspirations. I have always listened very closely to the singer-songwriters of Spain, as well as the top Flamenco players. This has had a major influence on my writing, altogether. Spain’s culture has been a great source of inspiration and vision.

In all collaborations, there are bound to be differences of opinion. Is it harder, given the turmoil in Israel, to work with collaborators who don’t share your background?

The people that I share the work with, even though they come from different cultures at home, have been every open, receptive, communicative and with a very strong mind that goes beyond our differences. The biggest challenge is understanding that our time together is not per project but for life … since there is no rush and no limits. We just stay together, meet often and build our long-term relationships.

Is the music that you make less important than the bridges you build creating it?

The music is first and foremost important. It’s all about music. The friendships and our times together are what happens while we write, produce, perform and share our passion.