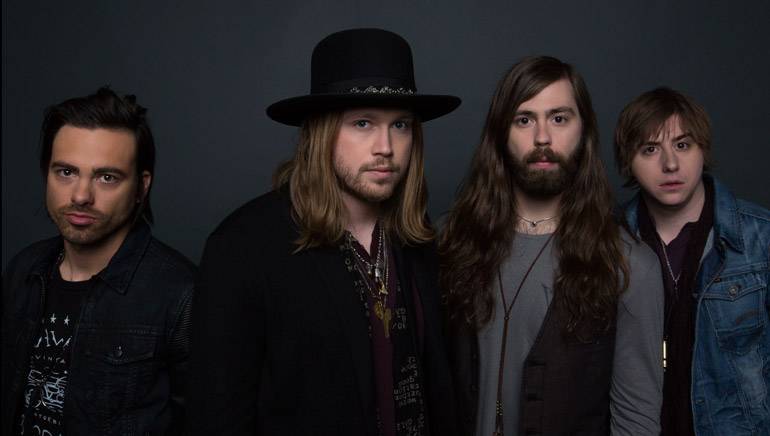 It’s a dreary spring day in Nashville, but for the four gentlemen of A Thousand Horses, the future is nothing but bright.

“It’s been crazy,” admits guitarist Zack Brown (no, not that Zac Brown), who is sitting around a boardroom table on Music Row with his three bandmates, who chuckle in agreement.

In January, their debut single, “Smoke,” earned them record-breaking status on Country Aircheck’s radio chart as the highest debut by a new act. By June, “Smoke” hit No. 1 on Billboard’s Country Airplay chart, making it the first debut single from a country band to hit the top of the charts since Zac Brown Band’s “Chicken Fried” back in 2008.

Throw in a CMT Music Awards nomination for Group Video of the Year and a summer packed with high-profile gigs, and you have the perfect formula for country music’s next big thing. But for Michael Hobby, Bill Satcher, Zach Brown and Graham DeLoach — whose debut full-length Southernality was released on Republic Nashville/Big Machine Label Group on June 9 — being the next big thing was a long time coming.

Lead singer Hobby and guitarist Satcher grew up together in Newberry, South Carolina, and first started playing together in their hometown music store. Satcher’s cousin, DeLoach, frequently visited from Georgia, and would join in on bass. Hobby and Satcher moved to Nashville in 2005, and DeLoach followed a few years later. When the guys met Brown in 2010, A Thousand Horses was not only born, but came galloping out of the gate.

“We formed the band in 2010 and had a short run on Interscope out in Los Angeles,” Hobby explains. “We had a manager and a booking agent and everything, but that ended as quickly as it came.”

“We got dropped, we lost the manager and the booking agent and everything, and we were back at square one,” Brown jumps in. “We came back to Nashville, just the four of us, and we had to figure out what to do. But, looking back, I think it was a really good thing for us because it forced us to really think about who we are without any outside influences. We had to ask ourselves what we wanted A Thousand Horses to be.”

After returning to Nashville, the band did the only thing they knew how to do.

“We made an EP together, and that put us on the road,” Hobby says. “And we stayed on the road. We’re still on the road right now!”

The time spent on the road — the group now performs as a nine-piece, including three backup singers — prepped the band for success when they headed into the studio with producer Dave Cobb (Jason Isbell, Jamey Johnson, Sturgill Simpson) last year.

“The best thing about the five years it took us to get here, being a band, is that we learned how to tour,” Hobby says. “We wrote a lot of songs, we’ve road tested the songs, and we really discovered our sound out there together. Some of the songs on the record, like ‘Travelin’ Man,’ we wrote when we first formed, and it’s lasted this entire time. So the best part of this record, at least for me, is that it’s stories from the past five years of our lives, everything that we’ve been through.”

Brown says that the band had modest expectations when embarking upon Southernality.

“We thought, if we can sell 2,000 copies of this thing, we’ll be able to make our money back,” Brown recalls. “That was our initial goal when we set out to make it. But before we could even release it, it got in the hands of Jimmy Harnen over at Republic, and that’s how we got our deal.”

The band returned to the studio and cut a few more songs, including “Smoke,” penned by Hobby, Ross Copperman and Jon Nite. They recently supported Darius Rucker on his sold-out Southern Style tour and made their television debut on NBC’s Today show, further elevating their profile as “Smoke” climbed the charts. Fans have certainly connected with their particular blend of Southern rock-infused country — in the tradition of the Allman Brothers, Lynyrd Skynyrd and the Black Crowes — and the lovelorn story driving “Smoke” is relatable to anyone who’s had an intoxicating presence in their lives.

“With ‘Smoke,’ that was the last song written for the album,” Hobby says. “Ross and Jon are buddies of mine, we’ve written a lot of stuff, and we wrote it two days before we went in to start the album. I sent the guys a worktape because I really loved it and thought it was us, and they felt the exact same way. It was the first song we went in to cut, and it kind of set up the whole vibe for the making of Southernality.”

If you’re wondering what “Southernality” means, there’s a story about that, and a song on the album to explain it.

“It’s a word I made up that’s like the combination of “Southern” and “personality,” Hobby explains. “We were all raised in South Carolina and Georgia, and it’s who we are and where we come from.”

And if you’re wondering what inspired the band’s name, there’s a story about that, too — sort of.

“When we formed the band in 2010, we had written a song titled ‘A Thousand Horses,’” Hobby says. “We were sitting around — just like every other band does — writing names on a whiteboard and coming up with ridiculous stuff, Googling everything we could. I said, ‘What do you guys think about A Thousand Horses?’ And to be honest, all four of us didn’t hate it, so we went with it. And now we’ve grown into it.”

The band has also grown into their relationship with BMI, which Hobby and Brown signed with when they were younger. This relationship has transcended record labels, managers, and all of the many curveballs that the music business can throw.

“Clay Bradley became our champion over there, and helped put us on CMA Fest and ACL Fest, which led to a great Rolling Stone write-up,” Hobby says. “BMI has been incredibly supportive of us.”