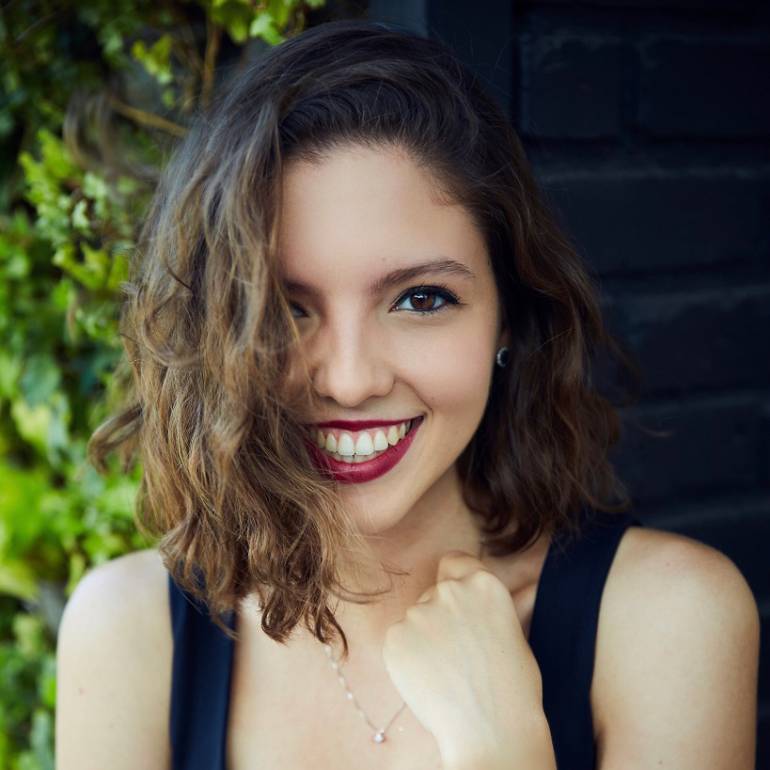 Aydingoz was recently appointed as the assistant chair of Berklee’s screen scoring department — a program she completed in 2017 — where she will help launch a new bachelor’s program in the rapidly growing game and interactive media scoring (GAIMS) concentration. The Istanbul, Turkey, native has also served as a director on musicals and festivals such as the Istanbul Music Festival and has helped produce live-to-film concert events in her adopted hometown of Los Angeles.

BMI caught up with Aydingoz, who — in addition to prepping for the upcoming academic year — is working on multiple projects including scoring a feature film, arranging music for a live event, and writing for a Netflix series. She shared how social media platforms like LinkedIn and Facebook helped her further her career, how it feels to return to Berklee, why she’s passionate about supporting the AWFC’s mission, and how she caught Disney’s attention (hint: It may have involved a fairy godfather and some pixie dust).

Congratulations on your recent appointment as Assistant Chair of Berklee College of Music’s Screen Scoring Department! As an alumna of this program, what inspired you to seek a leadership role there?
Berklee felt so much like home to me that I always knew one day I’d find my way back. When I saw on Facebook that this position was open, I decided to go for it, thinking that as a recent graduate, I might be able to empathize and communicate with our film scoring students on a deeper level and provide relevant industry advice, especially since I did what most of them wants to do: move to L.A.!

Being able to expand my career from Istanbul during a pandemic showed me that I can be a film composer from anywhere. So, I decided not to postpone what I initially planned for my 50s and do it in my late 20s: come back home where I can continuously get inspired, but can also hopefully inspire!

In your role, you’ll serve as a mentor to Berklee students, coordinating their recording sessions and ensuring their experience keeps up with the ever-changing film music industry. Did you have any mentors who encouraged you early on, or helped get you to the next phase in your career?
I’ve done nine internships in total — some in Boston, some in L.A. — and the ninth one was the charm! I got to assist fellow Berklee alum, Melissa Axel, on “Beauty and the Beast in Concert” at the Hollywood Bowl, which was the project that basically introduced me to my L.A. family and opened so many doors. Melissa very quickly transitioned from being a boss to mentor, friend and collaborator. Melissa always made sure I was aware of all the cool events in town, proofread some of my important job applications and cold emails, had me join all the organizations that could advance my career, and notified me about all the opportunities I wouldn’t want to miss out on — and still does!

I also owe so much to the Alliance for Women Film Composers, for which I’ve been a board member since 2019 and the secretary since 2021. The number of beautiful people I’ve met through it and the support I’ve received — from not only our presidents, leadership and board but also the whole membership in general — has been incredible. I wouldn’t be where I am without them!

You’ll also assist with launching a new bachelor’s program at Berklee in game and interactive media scoring (GAIMS). As someone who has scored for film, TV, video games and musicals, is your approach for scoring for games different than other mediums?
There is a whole other mathematical approach that goes behind scoring video games — where you must take into consideration how different layers will come in and come out, and how the players’ decisions will have the music meaningfully jump from one section to another. I feel like there are more limits with the technicality of it, but also more freedom with the creativity and musicality.

You’ve enjoyed a fruitful working relationship with Disney, serving as Assistant Music Director for a cappella group DCappella and arranging for various Disney albums and concerts, notably the launch of Disney+ in Turkey. How did you start working together?
I found about 50 different Disney executives on LinkedIn that I would love to get to know and meet for coffee during an L.A. trip I had prior to moving to L.A. I stalked every single one of them on Facebook and messaged them. One of them — I call him fairy godfather now — saw my message 1.5 years later when I was a temporary assistant at Bleeding Fingers. Lucky me, there was an urgent need for him to find a music assistant for Disney that day and he believed in me. Long story short, it’s all thanks to social media … and some pixie dust.

You serve as secretary and board member of the Alliance for Women Film Composers (AWFC). Can you share how you got involved with this organization, and why its mission is important to you?
I first heard about the AWFC on Berklee’s BMI day, when Lolita Ritmanis and Miriam Cutler visited our campus. They stopped by the Women’s Film Initiative, a student club for women film composers, and mentioned the alliance. Obviously, joining it became the #1 thing on my to-do list for when I moved to L.A., so I did. After spending about a year as a regular member, I did what I always do and went for something that I thought was way out of my league: I applied for a board position. I wrote a very long statement on how I can contribute and why they should choose me. Thankfully, it worked!

Our mission is important to me because music is a universal language that women are very capable of speaking — and they speak it so beautifully that more people should hear it. We create a lot of opportunities for our members to learn, collaborate, network, and support each other in various ways. Nothing is more inspiring than seeing my fellow women composers’ triumphs. Getting to work with them for our collective success is a gift!

You’ve also been recognized by Women in Media, winning the Best Score Award for scoring the film Noor as part of their CAMERAderie Initiative, which supports emerging voices of women, women-identifying, and gender non-conforming filmmakers, providing community and networking opportunities for participants. Have you met other collaborators through initiatives like this that have led to further creative endeavors?
Of course! That’s the beauty of our industry. Each collaborator brings other collaborators into our lives, and once we do enough projects, we are unknowingly surrounded by a wealth of creators that we’re about to cross paths with. For example, I scored a short dance film for Art With Impact back in February, through which I’ve gotten a feature film that I’m working on right now.

Tell us about Simchas and Sorrows, a new feature film you scored. What drew you to this romantic comedy, and how did you collaborate with the filmmakers to enhance the storyline with music?
Jennifer Smith, a great music supervisor and a great friend, invited me to join her on this film. It was an immediate yes, because we had collaborated on another film before, and I was really looking forward to working with her again. Plus, I trust her so much that if she is in, I’m in. As expected, the film was a joy to watch. It made me laugh, it made me cry, it made me want to write music.

By the time I joined the team, Jenny had already been working with them for months, because the initial plan was to only have licensed music. As she knew the story in and out and was also very informed about our director’s vision regarding the music, she was the one that I worked closely with. Her directions were so on point that after the first few cues, I basically never received any significant notes from Genevieve [Adams] — our wonderful writer, director, and lead actor. It’s the greatest when the story is heartfelt, collaborators are lovely, and there aren’t many revisions!

What are you working on now?
I’m arranging some songs and medleys for a Disney concert in Taiwan, scoring a feature film called Touchy-Feely directed by Marcelo Teson, writing additional music on various Netflix series, and composing an orchestral commission for Epic Lab in Switzerland.

How did you start working with BMI, and how has it impacted your career?
I joined BMI somewhere between my internships and assistant days. It’s like I’ve always been a composer, but I became a real one when I finally had a PRO [performing rights organization]. I can’t thank Reema [Iqbal] and Rose [Oliver] enough for always being available to help when I needed them. All the inspiration that comes from looking up to other BMI composers is a continuous source of motivation for me.