Posted in MusicWorld on October 17, 2018 by Malcolm Venable 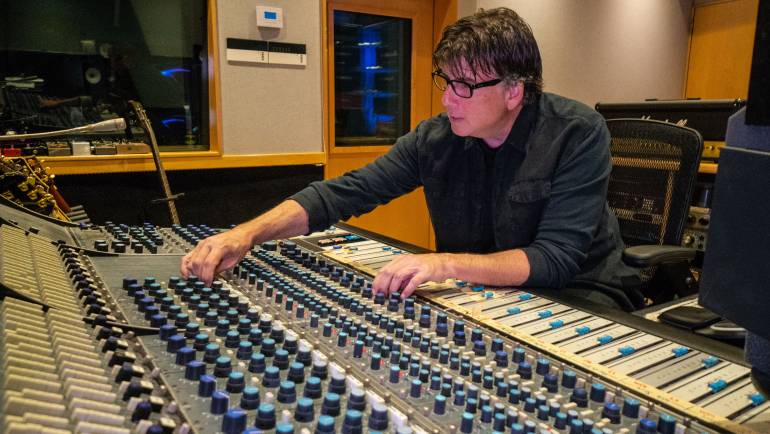 Producing hit songs requires as much technical know-how as the ability to let one’s head fly above the clouds, so to speak, and if there’s any producer who can legitimately claim to have mastered both skills, it’s Howard Benson. A onetime aerospace engineer, Benson has become a go-to producer for some of music’s biggest names, including My Chemical Romance, Rascal Flatts, Bon Jovi, Papa Roach, Gavin DeGraw, Santana, Kelly Clarkson, and Daughtry, for whom he produced the 5x platinum self-titled debut, the fastest selling debut album in Soundscan history.

Not surprisingly, the two-time Producer of the Year GRAMMY nominee has long been an early adopter of emerging tech, and his instincts continue to serve artists who seek out his technical expertise and vocal arranging prowess. Among those beneficiaries is Three Days Grace, the Canadian rock band whose Benson-produced singles “The Mountain” (No. 1 on the Active Rock and Mainstream Rock charts) and “Infra-Red” (No. 1 on the Billboard Rock Charts) helped them surpass Van Halen’s record for having the most No. 1 Rock Singles of all time. “Infra-Red” is the eighth No. 1 Benson crafted for the quartet. And there may be no better example of his knack for taking things apart and putting them together again than the cover of Garth Brooks’ “Thunder Rolls,” produced for the metal band All That Remains, which has racked up more than 23 million video views to date.

BMI recently caught up with Benson to talk about how his background influences his process, his dream tools and the importance of reaching for the stars.

Congratulations on your No. 1s for “Infrared” and “The Mountain.” You’ve been making music with Three Days Grace for many years; what about creating these songs felt good or different this time?

It was a really circular route. They started off with a different producer on this project. When they came [to me] it was mainly because the project was a bit haphazard. It wasn’t a record, it was demos and things like that. The first song they sent me I heard was “The Mountain.” I called Neil (Sanderson, co-founder of TDG) right away and I said, ‘Obviously, that’s the first single.’ There was no doubt. The issue with the song wasn’t that it wasn’t great. It just wasn’t presented well. it was in the wrong key. I’m always the singer guy. What really matters is how the vocals come off, and the singer wasn’t really performing with a lot of angst because it was too easy for him to sing the song. We placed it right up to his limit, which of course required a lot of rewriting and re-recording. Same thing with “Infrared.”

One thing I’ve always prided myself on: I’ve done 151 albums. They’ve all been finished. They’ve all been handed in, a lot of them have done really well. It’s not that I’m the most creative guy in the room, it’s just I’m really good at knowing what’s important and what’s not important and dealing with the suits when you have to. I think that there’s always room for new guys coming up, but there’s also a lot of room for guys who’ve been doing it for a while and know what they’re doing. That’s kind of me at this point. I’m a person people go to when they want hit records.

You famously started out in the aerospace industry. How has having that background helped you in music?

I went to Drexel University in Philadelphia. It was the real deal and it was really hard, and it was really depressing because I wasn’t thinking about engineering at the time. I wanted to be a musician. I really struggled through school. I would drive 120 miles a day playing gigs, while studying. I actually came out to LA when I was still a student and I joined a few bands. I was convinced I wanted to move here, so I came with my degree and I did engineering. I worked at an air research firm, Garrett AiResearch, which is part of AlliedSignal now. I would do that job, go to rehearsal and in the middle of the show – and this is what got my creativity piqued a little bit – we would be playing some really horrible song we wrote, and then it would hit me [how to solve an engineering issue at work] and then I’d go back to the music. There was something it was doing to my brain that made me able to think linear in a way, and also not linear at the same time.

So, I quit my job. I had a friend that worked at Sunset Sound, I started doing demos up there. Somehow, I skipped a step: I did not do the engineer runner thing. I was almost ignorant about it. I said, ‘Okay I’m a producer,’ which is exactly what you should not do, but I didn’t know. I started producing demos. You know how it is: you produce millions of songs until something finally happens. I was still struggling after 10 years into it.

As soon as I touched the computer, I knew I could finally get out what was in my head. I did a Less Than Jake record in 1997 [Hello Rockview] and that’s when the engineering paid off. I’d done so much computers at Drexel, it was easy for me. After Less Than Jake, I started knocking things out so fast at that point. Now I go back to Drexel and I teach a class sometimes. It’s about production, it’s about synthesizer sometimes, it’s about marketing. I always tell kids to get an education. Go to a school where you can think clearly and think logically If you want to go far in the music business.

You’ve always been at the forefront of using emerging tech, like Pro Tools. What are your favorite tools now? What tools do producers need that doesn’t exist yet?

We use Ableton, we use Logic, we use Pro Tools. So, getting those things to all talk to each other would be a lot easier. A lot of times bands will go, ‘Here’s our demo. We did it in Ableton.’ And we’re like, ‘Give us the audio because we can’t import your session without glitches and stuff.’ But tools-wise, we don’t have that many problems. We are a very well-oiled machine. That’s one thing bands say about us when they come in the studio: everything works.

You’ve said your collaborative process involves an initial meeting about the songs and your production style. Can you shed some light on that conversation - what specific things are you talking through? And how would you describe your style?

The first thing I ask is, ‘What kind of record do you want to make?’ So that uses about an hour because, five guys, they all have a different view. It’s not easy for me sometimes to completely crack it until we start working. Sometimes the question is, ‘Hey what do you like listening to right now? What’s on the radio you like and don’t like?’ All kinds of probing questions, like a doctor. Where does it hurt? After we get to those kind of conversations, it’s, ‘What’s going on in your personal life?’ And you have to know that. This is what we’re selling: feeling. If someone says everything is great, that’s a red flag for me. I picked up on that strategy from Kara DioGuardi. I wrote with her for Kelly Clarkson and watched her… she was always looking for these moments, these clues about what this person is like. So that’s what I do.

All That Remains’ cover of Garth Brooks’ “Thunder Rolls” landed them at No. 1 on iTunes Rock and Metal charts. Can you talk about making that?

I wasn’t familiar with this song at all. I remember thinking we needed to do something big with this. We brought in the guitar player – we sent it to Japan and he put these crazy guitars on there. Of course, the singer’s (Phil Labonte) voice and feel…he just delivered. He has his own thing. That was a hard one. That wasn’t easy.

A lot of your work is behind the scenes, very technical work. Do you consider what you do art or science or both?

Both. It has to be both. You open up the plug-in and you have the science part down, but then, you’d better be doing it so that it has a feeling to it. So, it’s both.

How much of arranging vocals is about good lyrics?

Oh, it’s so much. You try to make it onomatopoeia, where the word comes out as a feeling. A lot of times if it’s like a really hard core lyric, we will go scream-y, or if it’s a clean vocal, we will put stuff in the background to give it some mids. But I’m harmony crazy. I put a harmony on anything. I started doing that with Chris Daughtry. Chris and I have a tremendous arranger-vocalist relationship. If you listen to that first record, it’s just harmony city everywhere. I often play for my bands the acapella version of “Wouldn’t It Be Nice” by the Beach Boys and it’s so inspiring to listen to. It sets the tone. It’s the first thing we listen to. I’m not talking about the emotional part, but the technical part – it’s unbelievable. We have to constantly challenge ourselves, so we don’t get into a rut.

They were the first people that believed in me. Barbara Cane, I think she was the one that brought me in. I’ve got to tell you something, BMI is the first place you go to for performing rights.

I’m going to keep doing it until they tell me I can’t! So far, I have not had that happen. I have a lot of side hobbies. I love modular synths. I build my own. And they come out looking amazing. It’s the coolest thing ever. It’s all good. I’ve been very lucky in my career.