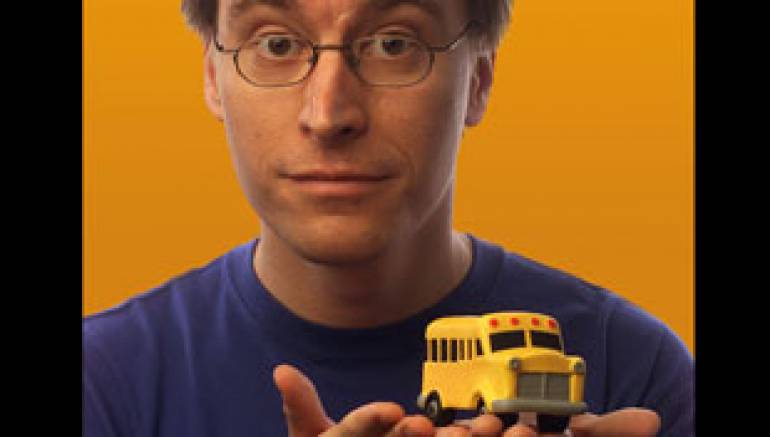 Roberts’s background as a former Montessori preschool teacher may come as no surprise, but then there’s his time spent as a University of Chicago divinity student, not to mention his stint in a surreal folk-rock band named Pimentos for Gus, whose tunes included “Hurling Sprouts, Pt. 2” and “Breakfast with Satan.”

Lest parents grow concerned over that last title, rest assured that the Pimentos’ approach was similar to that found on Roberts’s five family-oriented CDs: whimsical, a little goofy, and usually good for a laugh.

Growing up on “Schoolhouse Rock!,” the Fantasia soundtrack, and his older brother’s Beatles records, the Des Moines native could usually be found at pre-school “sitting in a corner with a record player, not talking at all,” he chortles. From there it was a pretty steady succession of music classes, piano and clarinet lessons, and school choruses until high school, when Roberts took up the guitar and started playing in bands.

As the Minneapolis-based Pimentos started working club gigs, Roberts took a day job at a Montessori school. “The music the kids were listening to was the same nursery-rhyme stuff that I listened to when I was a kid,” he recalls. “So I started playing everything from Sam Cooke to Irish jigs for them - and they loved it.”

Roberts left the school after a year. “I was not around kids at all,” he laughs, “but I kept writing songs for them, for reasons unknown to me.” In 2000 he released his first children’s album, Great Big Sun, and a new career was born.

“I found that all these pre-conceived notions about children’s music aren’t necessarily true,” he says. “Kids might like stuff that’s really repetitive and has simple lyrics, but I saw them fall in love with ‘Cupid’ by Sam Cooke, and with ‘Giraffe/Nightingale,’ which was originally a Pimentos song and started off with like four verses before you reached the chorus.”

Roberts feels there are few limits to the subjects he can explore in a children’s song. “You can just about give them anything, and they’ll digest it,” he says. “I usually vary the types of songs on my albums, and sometimes I’ll try to explore some of the more melancholy aspects of growing up, like moving to a new house or whatever.

“And I’ve gotten positive responses with those,” he continues. “They may not be the songs they’re going to jump to on the CD over and over, but they will respond to them.”

Though he doesn’t yet have children of his own, Roberts says he’s been able to draw upon his experiences with friends’ kids - or his own memories of growing up - for some of his most appealing material. “Airplane of Food,” featured on his third album, 2004’s Way Out, details an older brother’s growing frustrations with trying to get his younger sibling to eat something via a series of toy transportation devices that culminate with “The bicycle and tricycle/The tiny French-fried unicycle,” all to no avail.

Similarly, “I Chalk,” the lead track on his latest CD, Meltdown!, was based on watching kids create artwork on a sidewalk as their parents obliviously talked about the weather, while the title track reflects Roberts’ own frustration at not being able to find a subject to write about, illustrated in this case by the narrator’s mother flipping out when she finds her children drawing on the furniture. “A meltdown is contagious, contagious,” the song notes in an unambiguously contagious fashion.

Roberts says he admires those composers who try to write every day, “but I tend to write in spurts. Some people love the process of writing or recording; I love when it’s done.”

His advice for aspiring children’s songwriters is equally straightforward: “Don’t go in thinking you want to write a song for a kid. People constantly underestimate what a kid is capable of understanding. Just imagine you’re telling a story from a kid’s perspective.

“It’s the same process when you’re writing an ‘adult’ song,” he continues. “I usually go with something that has a direct relationship to an experience I’ve had, or I take on another person’s perspective, try to be different characters.”

Roberts is now concentrating on touring behind Meltdown! (accompanied by the Not-Ready-for-Naptime Players) and readying a DVD collection of songs and skits for next year. He’s also finding himself musing about the possible effects of parenthood on his songwriting.

“I’ll probably become a total cheeseball,” he chuckles. “I can see myself becoming completely saccharine-sweet and disgusting.”