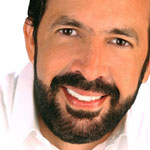 The birth of Juan Luis Guerra’s music dates back to 1984. His first record, Soplando, showed the experts that they were in the presence of a true musical creator. He followed up with Mudanza y Acarreo and Mientras más lo pienso…tú, both of which secured his place in Latin music history.

Guerra is credited with creating an entire musical movement in his native Dominican Republic, a rebirth of the traditional merengue sound embellished with impeccable, impacting lyrics. He made merengue, described as “a dancing rhythm that enters through the feet,” into his own style, which he calls “merengue for the feet and the head.”

His breakthrough CD, Bachata Rosa, made Guerra an international superstar and brought the traditional “bachata” rhythm unique to the Dominican Republic into the mainstream. The worldwide success of Bachata Rosa earned him the Best Tropical Album Grammy in 1991, catapulting him to stardom and leading to features in magazines like Newsweek and Billboard.

A year later, Juan Luis Guerra y 440 released the controversial album Areíto, a wise mixture of Antillean rhythms, social issues, poetry and romanticism. 1994’s Fogaraté experimented with one of the most original Dominican rhythms, the deep-country merengue, or “Perico Ripeao.”

Guerra returned to the music scene in 1999 with his best effort to date, Ni es lo mismo ni es igual, showcasing once again the excellent quality, sensibility and talent of this Latin music phenomenon. The release was deemed one of the best tropical music productions of the year and went on to win three Latin Grammy Awards in 2000: Best Tropical Album, Best Sound Engineering and Best Merengue Interpretation.

The following year, Guerra’s “best of” double album, Colección Romántica (Romantic Collection), is released, a true musical gem that brought together 20 of his best romantic themes, some edited and remixed with new arrangements.

In August 2004, under the new label Vene Music, the Latin Grammy Award-winning album Para Tí (For You) is released containing a selection of 11 songs completely written, arranged and produced (as usual) by Guerra. This masterpiece produces three singles: “Las Avispas,” named Best Tropical Song at the 2005 Latin Grammys and #1 on Billboard’s Tropical chart for 13 consecutive weeks, “Soldado” and the title track, “Para Tí.”

In April 2005, Guerra received the “Spirit of Hope” award at the Billboard Latin Awards, recognizing his social impact in his native Dominican Republic leading his philanthropic organization “Fundación 440,” a charitable organization that provides medical assistance to the disadvantaged.

Since 1986, Juan Luis Guerra  has been recognized with some of the most important awards in the music and show business world: