Posted in MusicWorld on August 20, 2010 by Maria Browning 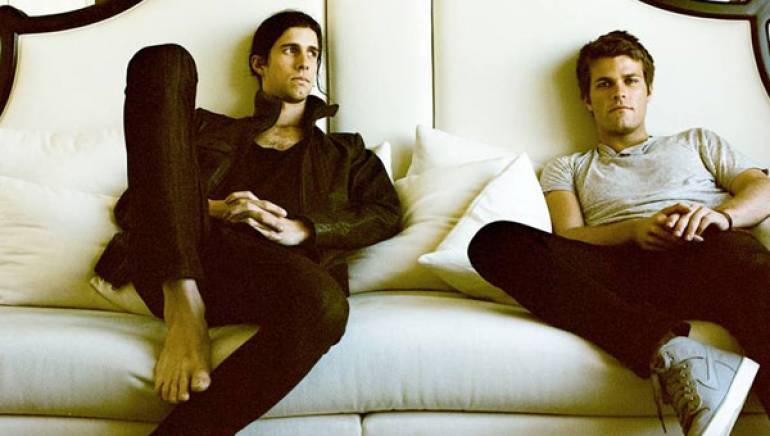 Nathaniel “Nat” Motte and Sean Foreman, the duo who make up 3OH!3, have come a long way since the days when they were fellow students at the University of Colorado, hanging around the Boulder hip-hop scene and making their first recordings in Nat’s “creepy” basement. They’ve been riding a wave of success that began with their 2008 single, “Don’t Trust Me,” which introduced a wide audience to their beat-driven, genre-crossing electronic sound. Collaborations with Ke$ha and Katy Perry have established them at the top of the pop music food chain, and their third record, Streets of Gold, has been climbing the charts worldwide since its release in June. In August, much to their delight, they embarked on a global tour with stops in Japan, Australia and Europe.

“It’s been a dream of mine ever since I was a kid to go to Japan,” says Sean. Nat is just as enthusiastic about touring. “It’s amazing,” he says. “You get to kind of visit the world, see a lot of things you wouldn’t necessarily see.” He notes that they value the immediate connection with audiences, too. “I think performance for us has always gone hand in hand with our art, with recording and writing music.”

As much as they love the stage, Nat and Sean are intensely focused on their songs. They co-wrote all the material on Streets of Gold during a two-week retreat in snowy Breckenridge, Colorado, and then headed to the studio to work with producers Matt Squire and Benny Blanco. According to Nat, Streets of Gold has “a sound that we’ve been honing for a couple of years. Instrumentally, that was the main thing, to combine everything we had, and combine genres and techniques and try to make a bigger sound.”

Hopping musical categories comes naturally to the pair, who cite a wide range of influences, from underground hip-hop artist Buck 65 to avant-garde folkie Joanna Newsom.  As for their future plans, Nat says their goal is to continue making music that grabs audiences and defies labeling: “We want to have a lot of fun and do a lot of creative things that cross a lot of genres.”