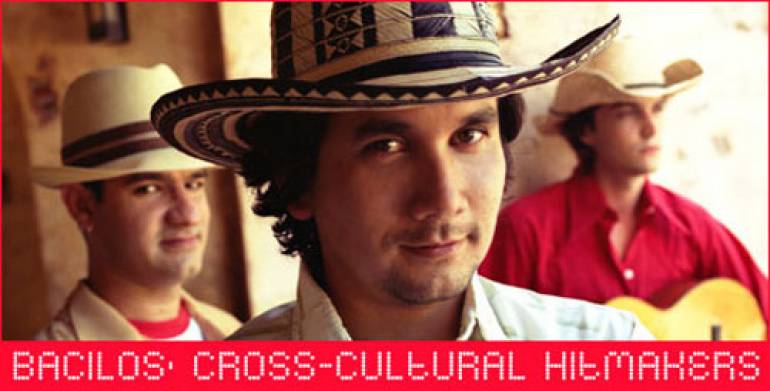 Bacilos, literally translated from Spanish, may refer to a disease-causing microorganism, but for this adventurous trio, catchy grooves, witty lyrical innuendo and spirited musical performances are the only symptoms. Puerto Rican-born percussionist, Jose Javier Freire, Jorge Villamizar, a Colombian singer/songwriter/guitarist, and bassist/vocalist André Lopes, a native of Brazil, first met as college students in the mid-'90s at the University of Miami. Originally a quartet, Bacilos explored a hard-rocking alternative sound that drew influences from Cuban folk troubadour Silvio Rodríguez and Argentine rocker Fito Paez before paring down to a trio, returning to their cross-cultural acoustic origins and recording an indie debut, Madera .

In 2000, they signed with Warner Music Latina, and delivered a self-titled release that won fans from Latin America to Spain, garnered two Latin Grammy nominations and earned the band gold status — albeit in Colombia. Still, it was an auspicious introduction; the single "Tabaco y Chanel" hit #1 on Latin radio and a tour opening for Spanish superstar Alejandro Sanz showcased them to the world.

Cross-pollinating bossa nova, tango and flamenco with flavors of Caribbean, cumbia and ska, Caraluna reflects Bacilos' widescreen influences, while one song, "Elena," also features lyrics in English. A headlining tour concurrent with this release has taken Bacilos from New York to Bogota; Los Angeles to Buenos Aires, establishing the band as a premier concert attraction. Additionally, primary songwriter Villamizar has distinguished himself as a writer for other artists, with cuts by Alejandra Guzman and Fernando Osorio.

Despite the group's successes, they express no interest in becoming a glossy pop band. Their hit "Me Primer Millon" may feature strings and brass, but Bacilos continues to honor their origins with real songs, acoustic instruments and unadorned harmonies, an organic approach in an ever so techno world.

For their growing legion of fans, it's a sound that is absolutely contagious.