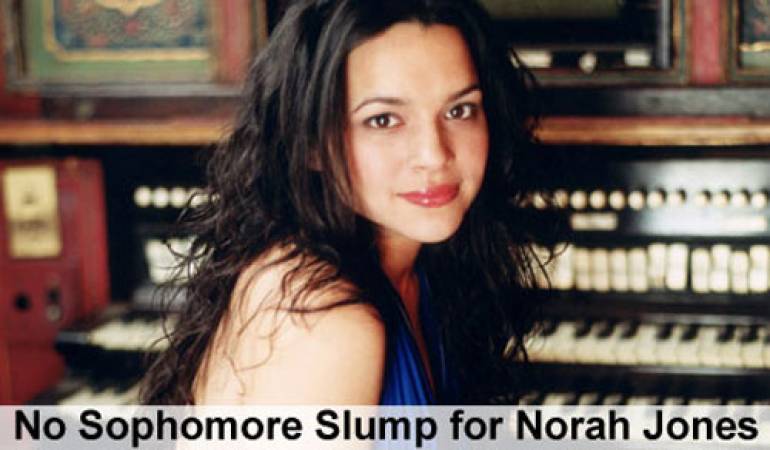 Authentic, warm, understated and old-fashioned aren’t adjectives that are often attached to top-selling recording artists in the “whoever shouts the loudest wins” world of contemporary music.

Big production values and even bigger marketing campaigns usually help fuel top-selling artists in the digital age. What makes Norah Jones the industry’s feel-good story of the new millennium is the fact that she’s managed to sell massive numbers of albums without the benefit of advertising hype, image mongering and grandiose musical offerings.

Jones’s 2002 debut album, Come Away With Me, has managed to sell an astonishing 18 million + copies worldwide and capture eight Grammy Awards. Her follow-up album, Feels Like Home, shot out of the sales gate like a bullet, selling more than a million copies in the United States during its first week of release.

Musically, Jones is very much a throwback to a time when songs and performers were far more soothing and unpretentious than they are today.

The signature song from Come Away With Me illustrates the Dallas native’s appeal. The lushly romantic “Don’t Know Why” feels like it could have been written in the 1940s, though it was penned by a contemporary songwriter and friend, Jesse Harris.

The 24-year-old Jones hasn’t been marketed like so many young female singers. The fact that the vocalist-pianist hasn’t been targeted to any one or two demographic groups has arguably helped her appeal to a very broad audience. She’s the extremely rare artist who is capable of wooing everyone from seven-year-olds to septuagenarians. Jones represents a lesson to the youth-obsessed music industry: She’s proof positive that there are vast numbers of music consumers out there that aren’t between the ages of 12 and 30.

Feels Like Home arrived with major expectations and the inevitable chatter about a possible sophomore jinx, but the album has been an unqualified hit, with several cuts showcasing Jones’s songwriting skills. She also recorded songs written by the other musicians in her band.

In addition, the album includes three cover songs: Townes Van Zandt’s “Be Here To Love Me,” Tom Waits and Kathleen Brennan’s “The Long Way Home” and Duke Ellington’s “Melancholia,” which Jones wrote lyrics to and retitled “Don’t Miss You At All.” Guest musicians include Levon Helm and Garth Hudson of the Band, while Dolly Parton duets with her on “Creepin’ In,” a tune penned by Alexander.

Jones’s grandparents were fans of Parton and Willie Nelson, but she initially rejected country music while growing up in Texas. As an adolescent, she instead gravitated toward the very unsubtle sounds of heavy metal and grunge groups like Motley Crue, Guns N’ Roses and Nirvana.

But this rock phase only lasted between grades five and eight, and she subsequently fell in love with jazz. She attended a performing-arts high school in Dallas and studied jazz piano for two years at the University of North Texas in Denton.

Jones spent the summer after her sophomore year in New York City. After landing a few gigs, she decided to stay. She initially played in Italian restaurants and theater-district lounges.

The day after her twenty-first birthday, she auditioned with Bruce Lundvall, the president of Blue Note Records, and he signed her to the jazz label. When Come Away with Me was released in 2002, she was still waitressing. But the album sold 10,000 copies its first week and Jones was soon out on the road, opening up for small acts and then major ones like the Dave Matthews Band.

For an artist who would have been content if her debut album had only sold 25,000 copies, the continually escalating sales figures surrounding the work made her uncomfortable. Lundvall recalls Jones asking him if he could possibly slow down the seemingly unstoppable commercial momentum of Come Away With Me.

An introverted performer, Jones seems unimpressed with the trappings of fame and fortune. She continues to seek comfort and normalcy with Alexander and their tight knit band. A visitor to her tour bus is more likely to encounter a Scrabble tournament than anything resembling decadent partying.

Jones’s compelling vocal prowess, single-minded dedication to her craft and disdain for celebrity all point to an artist with a long and rewarding career in front of her.