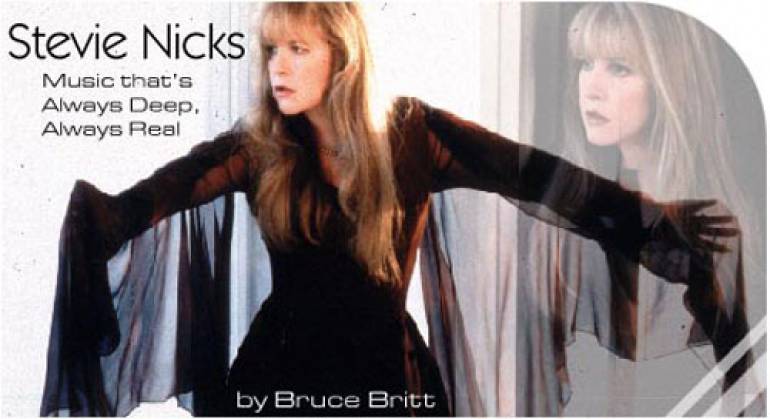 Hers is the voice that launched a million record shipments.

Indeed, before Stevie Nicks joined Fleetwood Mac in 1975, the group was a road-weary blues band with a surplus of critical acclaim and an undeserved lack of commercial success. But with Nicks' recruitment, the tide dramatically shifted for the stalwart quintet. Nicks was a bona fide goldmine: a superb songwriter with bewitching good looks and the voice of a despairing angel. With Nicks' added appeal, Fleetwood Mac went from cult status to global superstardom. And when Nicks launched a fortuitous solo career in the early '80s, she became a role model for generations of aspiring female rockers.

Now, with the welcome release of her first solo album in seven years, Nicks once again demonstrates her formidable musical talents. Co-produced by Sheryl Crow and featuring guest appearances by Macy Gray, Sarah McLachlan and Dixie Chick Natalie Maines, Trouble in Shangri-La teams the masterful singer/songwriter with some of her most accomplished "students." New songs like "Candlebright," "Everyday" and "That Made Me Stronger" possess the plainspoken power of diary confessions - which, as it turns out, is pretty much the case.

"My music often unfolds like the book of my life," Nicks recently stated. "Every step along the path of my life, I've been writing it all down, taking incredibly detailed notes . . . it's always deep, and it's always real."

Throughout her career, Nicks has displayed a knack for combining romantic lyricism with organic, folk-inflected pop. Born Stephanie Nicks in Phoenix, Arizona, she eventually relocated to Southern California where she met singer/songwriter Lindsey Buckingham. A musical and romantic partnership ensued, but the duo's one major label recording went unnoticed. But upon joining Fleetwood Mac, the Nicks/Buckingham magic could no longer be denied. Providing the perfect foil for Buckingham's roots-rock forays and Christine McVie's sunny love songs, Nicks composed and performed evocative ballads shrouded in mystery. She was responsible for two Top 20 Fleetwood Mac hits, "Rhiannon" and "Sara," while her 1977 ballads "Dreams" is the band's only number one song to date.

In 1982, Nick further demonstrated her musical abilities by releasing a debut solo album, Bella Donna. The disc sold over four million copies on the strength of hits like "Edge of Seventeen" and "After the Glitter Fades," and duets like "Stop Draggin' My Heart Around" (with Tom Petty) and "Leather and Lace" (with Don Henley). Subsequent Top 20 hits "Stand Back" (1983), "Talk to Me" (1985) and "I Can't Wait" (1986) solidified Nicks' reputation as an artist in her own right.

When Fleetwood Mac's 1997 reunion resulted in a live album, Nicks won acclaim for her show-stopping performance of "Silver Spring." Now, with the recent release of Trouble in Shangri-La, Nicks confidently begins a new chapter in her iconic career. The album features no techno flourishes, hip-hop overtones or other ingratiating contemporizations. Trouble in Shangri-La is the portrait of a recording artist still performing at the top of her game.