Posted in MusicWorld on July 10, 2001 by Martin Huxley 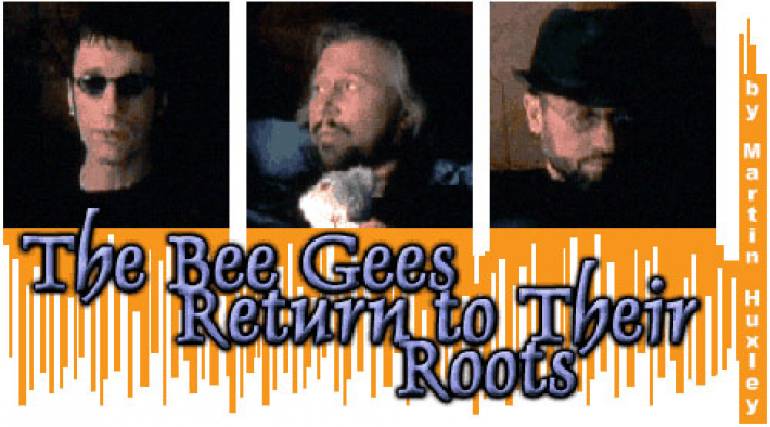 The Bee Gees' current release, This Is Where I Came In, finds the durable sibling trio returning to their roots, re-embracing the organic, harmony-driven approach that originally propelled them to chart success in the 1960s, a decade before the disco-era superstardom that accompanied the group's work on the Saturday Night Fever film soundtrack.

The English-born, Australian-raised trio of Barry, Maurice and Robin Gibb - who began harmonizing in childhood and are presently in their fifth decade of music-making - have been an extraordinarily effective hitmaking team, both on their own and as behind-the-scenes players who've written and/or produced hits for an array of performers including Barbra Streisand, Diana Ross, Dionne Warwick, Dolly Parton and Kenny Rogers. They are members of both the Rock & Roll Hall of Fame and the Songwriters Hall of Fame, and are the only act to have hit the number one slot on the U.K. pop charts in the '60s, '70s, '80s and '90s. Their songs have inspired no less than 500 cover versions by artists as diverse as Elvis Presley, Janis Joplin, Al Green and, most recently, Destiny's Child, whose version of the Gibb-penned classic "Emotion," was originally a 1978 hit for Samantha Sang.

True to the trio's desire to emphasize their vocal and melodic strengths over studio gimmickry, the self-produced This Is Where I Came In was mostly recorded at the Bee Gees' own Middle Ear Studios in Miami. It downplays the elaborate production that's been prominent in their recent albums in favor of a more natural, performance-oriented approach that showcases the Gibbs' unmistakable harmonies and distinctive melodic sensibility.

"This is where we would have gone had we not done Saturday Night Fever," Barry recently told USA Today. "We thought, 'Let's get back on that path, because that's where we belong'."

"We actually sort of went back to the way we recorded in the late '60s," Maurice states, adding, "We wanted that live feel."

"We just wanted to rock a bit more," says Maurice. "We just wanted the three of us out there together [with] one microphone, singing the harmony. And that's what we did. And for the whole record, on each song, it was two takes for the vocals."

Where in the past the sibling bandmates have generally written and developed material as a team, this time around each brother went into the studio and created several tracks on his own before the three came together to complete the album collaboratively. "The idea of not making an album of all the same kind of songs appealed to us this time," Barry explains.