So familiar are his songs, Woody Guthrie (1912-67) has become part of the fabric of daily life. His compositions speak of the magnificence of our land and its people as well as the damage we do to another and the environment. They are among the most important of the numerous works represented by BMI and illustrate how many of the most familiar songs are included in BMI's repertoire. When one hears "Pastures of Plenty," "Vigilante Man," "Grand Coolie Dam" and "Roll On Columbia," the complex nature of American society comes across with striking clarity. Guthrie's most famous composition, "This Land Is Your Land," has become a virtual second American Anthem. Woody was a prolific writer, with more than 550 songs to his credit, but his talents were not musical alone. He possessed substantial skills as a visual artist, and throughout his life he created images that clarify his ideas and emotions as memorably as his music. 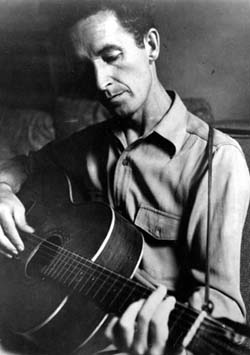 For many people, however, Woody's paintings and drawings have not been as well known as his songs. The traveling exhibit, "This Land Is Your Land: The Life and Legacy of Woody Guthrie," brings to the general public the many sides of this prominent American, including the visual dimension of his phenomenal career. It seems Woody could draw as easily as he drew breath or wrote music. Images appeared in his letters to family and friends, the 1943 autobiography Bound For Glory and countless paintings and drawings. The range of subject matter is broad, from the erotic to the political, the familial to the fantastic. Dr. Ellen Landau, professor of art and art history at Case Western Reserve University, has written of the visual dimension of Guthrie's career and compared his work to such celebrated contemporaries as Thomas Hart Benton and Ben Shahn.

In addition to his art, "This Land Is Your Land" reminds us of the turmoil that accompanied his talent: the political agitation, the wanderlust, the curse of Huntington's Chorea that ended his life all too soon. At the same time, his music, his humor, and his love of life come through as well as his influence upon the generations that followed him and his own children, Arlo and Nora, who have had careers in music and dance. His music has even been a recent best seller in the form of British musician Billy Bragg's 1999 settings of the writer's unrecorded lyrics, Mermaid Avenue, that sold over 300,000 copies.

"This Land Is Your Land" was assembled by the Smithsonian Institution Traveling Exhibition Service and the Woody Guthrie Archives in association with the Smithsonian's Center for Folklife and Cultural Heritage. It will be at the Museum of the City of New York [1220 5th Avenue at 103rd St.] through April 23rd before travelling to other cities. Supplementary events, including concerts, films and lectures, have been planned throughout this time.