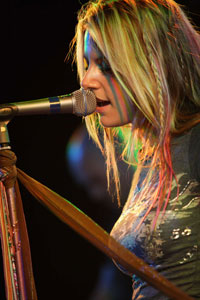 Canadian singer/songwriter Mandi Perkins will be BMI's "Pick of the Month" for July, performing at the Viper Room on Wednesday, July 12. Canada's new rock gem will take the stage at 9 p.m. and tickets will be on sale for $10. The Viper Room is located at 8852 Sunset Blvd., West Hollywood.

Perkins is undoubtedly one of the freshest, most prolific songwriters to hit the U.S. from our North American neighbor. Consistently delighting audiences with her enthusiastic performances, her "take no prisoners" attitude, and her contagious melodic rock, Perkins is set for fame. Her sound, a vigorous hybrid of Linkin Park and Sarah McLachlan, is as dynamic as it is emotive.

Originally from Toronto, Canada, Perkins began her career at a young age, acting in plays such as Annie and Les Miserables, but her destiny was always in music. As soon as she could, the gregarious artist made a move for California, performing at prominent venues like the Roxy, the Troubadour and the Hard Rock Café, giving birth to the infectious six-track EP, Broken Window (2005).

The self-made artist began spreading her music by word of mouth. Now, thanks to the virtual world of MySpace.com, Perkins has managed to reap an ambitious following, selling over 5,000 copies of her first album before even landing a record deal.

BMI's "Pick of the Month" is a live monthly showcase series focusing on a musically impacting band or artist whose talent is worthy of attention. The series is meant to help expose these artists to the music industry and public through a show held at a quality venue with discounted admission.