Posted in News on November 6, 2005
BMI today announced that legendary songwriter and recording artist Steve Winwood will be honored as a BMI Icon at the company's annual London Awards. The gala ceremony and dinner will be held November 29 in the Grand Ballroom of the Dorchester Hotel in that city. 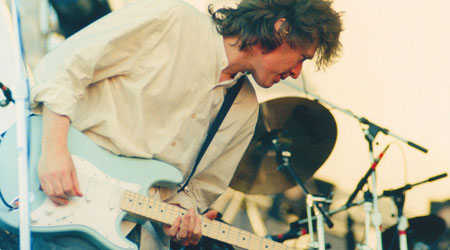 Winwood, who will be honored for his "enduring influence on generations of music makers," joins a distinguished list of BMI Icons that includes Van Morrison, Paul Simon, Brian Wilson, Carlos Santana, Charlie Daniels, James Brown, The GAP Band and Dolly Parton, among others.

With a career that spans more than 40 years, the Grammy Award-winning singer has sealed his place in history both as a solo artist and as a member of such celebrated bands as the Spencer Davis Group, Traffic and Blind Faith. He scored his first international hit while still a teen with the Spencer Davis Group classic "Gimme Some Lovin'," and co-wrote all of Traffic's biggest songs, including "The Low Spark of High Heeled Boys," "Dear Mr. Fantasy" and "Pearly Queen."

His brief stint with supergroup Blind Faith, which he formed with Eric Clapton during a hiatus from Traffic, produced the Winwood-penned masterpiece "Can't Find My Way Home." Traffic, who disbanded permanently in 1974, was inducted into the Rock and Roll Hall of Fame in 2004.

As a solo artist, Winwood enjoyed a string of mega-hits in the 80s, including BMI Award winners "While You See a Chance," "Valerie," "Back in the High Life Again," "Higher Love" and "Roll With It." Winwood is a member of the UK's Performing Right Society (PRS); BMI represents his works in the United States.

The BMI London Awards recognize the European songwriters and publishers of the most played songs on US radio and television in the past year and in a variety of music formats. The Robert J. Musel Award will be presented to the writer and publisher of the most performed Song of the Year.