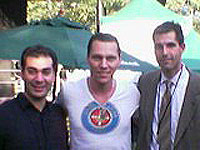 International DJ/producer Tiësto, who was in New York for the recent Billboard Dance Music Summit, met up with BMI executives after his performance in Central Park. Voted twice as the #1 DJ in the world by DJ Magazine, Tiësto performed live at the opening ceremony of 2004 Summer Olympics in Athens, Greece, the first DJ to ever do so. His forthcoming album Parade of the Athletes features music he composed specifically for the Olympics.