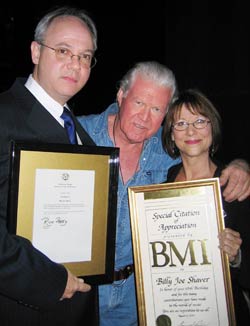 Billy Joe Shaver, on the eve of the release of his new album Billy and the Kid, celebrated his 65th birthday in Austin, Texas with a show billed as the "Billy Joe Shaver Birthday Bash" at the city's Paramount Theater. Friends who paid tribute to Shaver included Todd Snider, Bruce Robison, Kelly Willis, Jack Ingram, Jimmie Dale Gilmore, Joe Ely and Robert Duvall.

Seen wishing Shaver (center) a happy 65th birthday are Texas Music Office Director Casey Monohan, who surprised him with a letter of thanks from Texas Governor Rick Perry, and BMI's Jill McGuckin, who presented Shaver with a Special Citation of Appreciation recognizing his many contributions to the world of music.