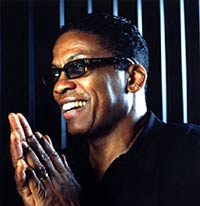 BMI composer and music legend Herbie Hancock donated several of his instruments to the Smithsonian's National Museum of American History in a special ceremony on March 30 that kicked off Jazz Appreciation Month (JAM). Sponsored by BMI, JAM is an annual event that pays tribute to jazz as both an historic and a living art form. During the month of April, the museum will highlight the history and music of jazz through concerts, programs and displays.

"Few things are more all-American than jazz," said Brent D. Glass, director of the National Museum of American History. "As the nation's history museum we want to raise public awareness of jazz as one of America's cultural treasures and we hope that Jazz Appreciation Month will continue to nourish the growing appetite for jazz."

Hancock donated a keyboard, two synthesizers and a headphone microphone to the museum. The keyboard, a Fairlight CMI Series II, is the instrument on which Hancock composed his hit tune, "Rockit" (1983), a milestone in pop music. The Fairlight was significant as one of the first instruments to include sampling, a technique later used by pop musicians. Both synthesizers - one a 1983 MemoryMoog and the other a 1983 Yamaha KX-1 remote - were played during Hancock's live performances of "Rockit" in the 1980s. The Yamaha KX-1 is significant, as its design permitted performers to roam about the stage while playing. Also from his "Rockit" performances (and music video) is the Shure SM-10 headphone microphone, which was important not only because it allowed performers to hear the sound of their instruments over the crowd, but also for its use as a microphone for "vocoding," which, in conjunction with a vocoder, could synthesize the human voice to produce a robotic sound.

"Hancock's instruments not only represent the career of one of our country's most prominent musical figures, but they help us to better understand the story of electric and electronic musical instruments and their place in American culture," said curator John Edward Hasse.

Born in 1940, Hancock was a child prodigy pianist, having performed at the young age of 11 with the Chicago Symphony Orchestra. His love for jazz developed in high school, and his double major in music and electrical engineering at Grinnell College paved the way for a long, successful and innovative career. His 1963 debut album, Takin' Off, introduced his hit "Watermelon Man," which became a jazz staple through recordings by Hancock, Quincy Jones, Mongo Santamaria, and many others. That same year Hancock was invited to join the legendary Miles Davis Quintet, with which he achieved both group and personal success.

Hancock is acclaimed for his musical experimentation and innovation and has received multiple Grammy Awards, an Academy Award, and a 2004 Jazz Masters Award by the National Endowment for the Arts. He has crossed several musical genres, playing both acoustic and electronic music and performing and composing not only jazz, but R&B and pop as well.

Throughout the 1970s and 1980s, Hancock recorded a significant number of critically acclaimed albums, including Fat Albert Rotunda (1970), composed for the Bill Cosby special "Fat Albert;" Head Hunters (1973), the first jazz album to ever go platinum; and the platinum album Future Shock (1980), which electrified the dance and R&B charts with the hit single "Rockit." Hancock has also had a successful career composing film and television music, which culminated in an Oscar win for the film score Round Midnight in 1986. His latest albums, Future2Future and Directions in Music, were released in 2001 and 2002 respectively.

Hancock's instruments will join the museum's collection of memorabilia from other jazz musicians, including Ella Fitzgerald, Lionel Hampton, Tito Puente, Artie Shaw and Duke Ellington. The Smithsonian operates the world's most comprehensive set of jazz programs including Jazz Appreciation Month. JAM, which coincides with the April birthdays of such jazz giants as Ellington, Fitzgerald, Tito Puente and Hancock, will be commemorated with numerous events.

The National Museum of American History traces American heritage through exhibitions of social, cultural, scientific and technological history. The museum, located at 14th Street and Constitution Avenue N.W. in Washington, DC, is open daily from 10 a.m. to 5:30 p.m., except December 25.