Posted in MusicWorld on March 9, 2004 by Katherine Turman 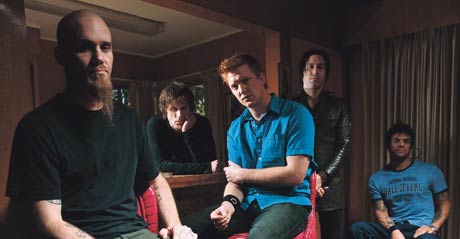 Given that these "Queens" are five pretty macho-looking men, it's clear this is one band that has a sense of humor about itself. (Titling their 2002 CD Songs for the Deaf is further proof of their ironic bent.) And while "Stone Age" may conjure up visions of Fred Flintstone — and yes, they are Rock with a capital R, with some calling them "stoner" rock — there is much fluid finesse tin their music.

The Southern California band, formed in 1997, is fronted by singer/guitarist Josh Homme, a tall redhead who looks more like a basketball player than a rock star. But thanks to songs like the hypnotic "Go With the Flow" and "No One Knows," everyone is digging QOTSA's post-grunge, semi-hippie hard rock, including Foo Fighters' frontman Dave Grohl. Grohl, in fact, played drums on the Songs For the Deaf and toured with the band for a time, although the current lineup is rounded out by vocalist Mark Lanegan, drummer Barrett Martin, bassist Van Conner and drummer Gary Lee Conner, all formerly of Screaming Trees, a band Homme guest-toured with.

Homme, who has been in bands since high school, used to be contrary for the sake of it, saying about the songs for his late, lamented band Kyuss, "I wouldn't even write a chorus, even though I had 'em. Now, personally, it's like whatever's there and sounds good. We want to be able to play anything we want to play."

That playing earned QOTSA a tour with the Chili Peppers, a spot on the 2002 Coachella music festival (spitting distance from Homme's desert origins) and Grammy noms in both 2003 and 2004. Cleary, this lineup will be Queens for much longer than a day.