Posted in MusicWorld on March 9, 2004 by Sharon Liveten 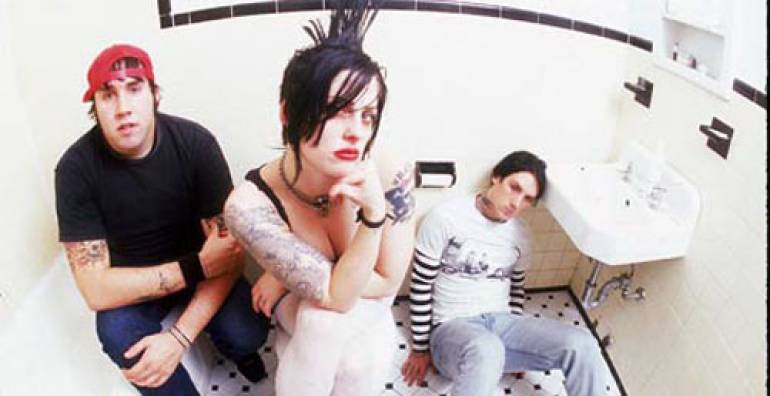 The Distillers are out to rescue rock & roll, and its fans from the blahs. The band — singer/guitarist Brody Dalle, drummer Andy Granelle, bassist Ryan Sinn and guitarist Tony Bradley — is far from the musical politeness of pop. They barge around with meaty, gritty rock music, growling themes and not-so-subtle reminders of when rock was not only a little dangerous, but a lot fun.

The band’s third album, Coral Fang, is chock filled with punk-rock angst and credibility. Coral Fang was produced by Gil Norton (who earned his stripes with the Pixies) and walks the difficult line between hard-core and palatable-to-the-masses radio fare. Songs like “Here To Know” and “Deathsex” are driving, arrhythmic and messy — the very definition of what punk rock is supposed to be, but these days rarely is. Those songs are also buried way down in the album’s sequencing.

It is the upfront tunes however, such as “Drain the Blood” and “Die on a Rope” that channel the band toward greatness. Remincent of Hole, the songs — like The Distillers — are driven, angry and ultimately accessible.

Dalle is an Aussie who arrived in Los Angeles as a teenager, and still envisions herself as the ultimate outsider. She might be appalled, but The Distillers could just be the band to refresh the stale state of rock & roll for everyone. After all, it’s a dirty job, but somebody’s got to do it, and The Distillers are up for the challenge.