Posted in MusicWorld on December 8, 2003 by Martin Huxley 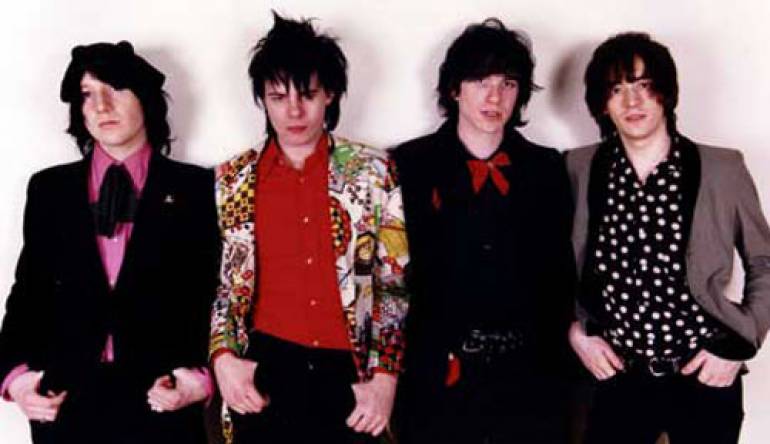 The Star Spangles' story began in the suburban backwater of Brewster in upstate New York, where teen outsiders Ian and Tommy were drawn together by a shared affinity for raw rock & roll. Following their obsessions to Manhattan's East Village, they found their musical leanings and thrift-shop-formal dress sense to be decidedly out of fashion on the local scene -- a situation that's decisively reversed itself in the recent past. Early in 2001, Wilson and Volume were joined by New Hampshire native Price and Czechoslovakia-born, New Jersey-raised drummer Valentine.

Bazooka!!! -- produced by New York rock veteran and frequent Ramones producer Daniel Rey -- abounds with ragged, boisterous teen-angst anthems, including such memorable tunes as "Stay Away from Me," "I Live for Speed," "Angela," "Stain Glass Shoes" and the apocalyptic "Which of the Two of Us Is Gonna Burn This House Down." The band's stylistic agenda is further underlined by its choice of cover tunes, namely "I'll Get Her Back," a raucous adaptation of the Hoodoo Gurus' "I Want You Back"; and "Crime of the Century," an obscure tune originally cut by the Johnny Thunders/Wayne Kramer punk supergroup Gang War. Of the latter, Tommy admits, "Only Ian knew it was a cover. The rest of us found out later. We thought we wrote it."

Despite their current rise to next-big-thing status, the guitarist keeps the Star Spangles' new notoriety in perspective. "We're bums," he recently told Rolling Stone . "I was on welfare until we signed. We're still poor, but now we have something to do during the day."