Posted in News on January 30, 2003
The technology, developed by SGAE and GEMA, will facilitate the reporting of the use of musical works valued at more than $2 billion dollars.

FastTrack, the Digital Copyright Network, has acquired a majority interest in the Argos International Organization, the technological enterprise that was developed by GEMA, the German author’s society, SGAE (Sociedad General de Autores y Editores) the Spanish author’s society, and sDae, the digital subsidiary of SGAE. The adoption of the Argos technology by FastTrack will standardize the reporting of the global use of the musical compositions of its members, who annually generate more than $2 billion in royalty income. 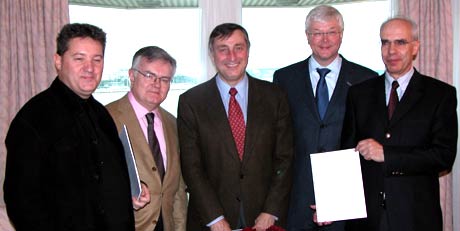 FastTrack is the alliance of North American society BMI and eight European societies: AKM (Austria), Austro-Mechana (Austria), GEMA (Germany), SABAM (Belgium). SACEM (France), SGAE (Spain), SIAE (Italy), and SUISA (Switzerland). Launched two years ago, its principal purpose is to develop and harmonize digital tools for 21st century management for author’s rights throughout the globe. FastTrack has already made important advances in the digital realm in the processes of registration, documentation and licensing of works. Its projects are based on a global model of information networks that utilize the Internet to connect to resources.

Argos is a project launched in 1998 by SGAE and GEMA, with support from the ESPRIT program of the European Union. Following years of development, in 2002 the Argos International Organization (AIO) was created, with GEMA, SGAE and sDae being its founding stockholders. Now incorporated as AIO, FastTrack has become the major stockholder of the society, with a 60% interest; the remaining 40% is distributed between SGAE and sDae.

Argos is a technological tool that permits licensees of copyrighted works to automate the process of sending information about the use of those works to copyright organizations licensing the works. The Argos technology aggregates information, sending it to the appropriate copyright societies using an online tool, which streamlines work for both the licensee and the society, and facilitates licensees contractual obligations to provide information on the use of works. The Argos system also makes it possible to generate worldwide work use statistics and market analysis. Argos takes its name from the mythological prince, who, as the story goes, had 100 eyes and slept with fifty eyes closed while fifty others remained open.

FastTrack now adds Argos technology to complement its three original strategic initiatives. Following the successful deployment among FastTrack members, it is anticipated that these technical tools will be offered to other author’s societies.