Posted in News on January 28, 2003
Award-winning songwriter Jim McBride recently visited BMI's Joyce Rice and Paul Corbin in Nashville to sign a writer agreement with the performing rights organization. McBride was a full-time postman and part-time songwriter until 1981, when he began to pursue his songwriting career exclusively. His first hit came that year with "A Bridge That Just Won't Burn," recorded by Conway Twitty, and was quickly followed by his first #1 "Bet Your Heart On Me," recorded by Johnny Lee. 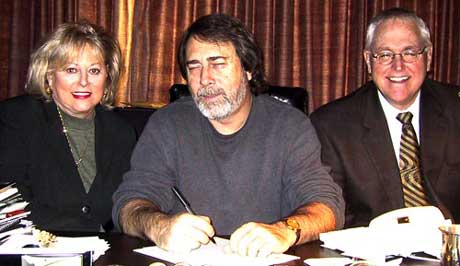 His other #1 songs include "Rose In Paradise" by Waylon Jennings and four by Alan Jackson: "Chasin' That Neon Rainbow," "Someday," "Chattahoochee" and "Who Says You Can't Have It All." "Chattahoochee," which he co-wrote with Jackson, was named Song of the Year at the 1994 CMA Awards.