BMI legends Bill Carlisle and Porter Wagoner will become the newest members of the Country Music Hall of Fame, bringing the Hall's total to 88. Formal induction will take place during the 36th Annual CMA Awards, which will be broadcast live on CBS-TV, Wednesday, November 6 (8:00 - 11:00 PM/EST) from the Grand Ole Opry House in Nashville.

Wagoner is being inducted in the annual “Open” Category, while Carlisle is to be inducted in the special “Performer Whose Career Achieved National Prominence Prior To 1980” Category. All inductees are chosen by the Hall of Fame panel of electors, consisting of more than 300 anonymous voters appointed by the CMA Board of Directors. 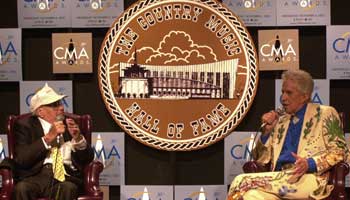 A Missouri native, Wagoner brought Country Music into television households on a weekly basis long before the TNN, CMT or GAC cable networks were ever conceived. Before he signed with RCA Records in 1952, “The Thin Man from West Plains” was a featured performer on Red Foley’s groundbreaking “Ozark Jubilee” (broadcast nationally on television and radio from Springfield, Missouri).

A string of successful hit songs, including “Company’s Comin’,” “A Satisfied Mind” and “Eat, Drink, and Be Merry,” led Wagoner to move to Nashville and accept an invitation to join the Grand Ole Opry in 1957. He returned to television in 1961 with “The Porter Wagoner Show,” a weekly syndicated series based out of Nashville. The program started with 18 stations and eventually grew to more than 100 stations in the early ‘70s. The series, which ended in 1981, provided a showcase for the hottest Country Music stars of the day; but the show also gave Wagoner tremendous exposure as he continued to hit the music charts with songs like “Misery Loves Company,” “I’ve Enjoyed As Much of This As I Can Stand,” “Green, Green Grass of Home,” “The Cold Hard Facts of Life,” “The Carroll County Accident” and many more.

He won three Grammy Awards (1966, 1967, 1969) for gospel albums he recorded with the Blackwood Brothers. Wagoner added the then-unknown Dolly Parton to the cast of his television show in 1967 and soon began recording duet albums with the young singer as well as producing her solo albums. Their first collaboration, “The Last Thing On My Mind,” launched a string of Top 10 hits for the duo. They went on to win three CMA Awards (1968 Vocal Group of the Year, 1970 & 1971 Vocal Duo of the Year) as well as a 1975 BMI Country Award for co-writing "Please Don't Stop Loving Me." Wagoner and Parton went their separate ways in 1975 to focus on their solo careers. Parton would later write her classic song “I Will Always Love You” about him.

In addition to recording his own albums, Wagoner appeared in the Clint Eastwood film “Honky Tonk Man,” served as Opryland’s Goodwill Ambassador for several years and was a frequent host of the long-running “Opry Backstage” TNN television series. “The Wagonmaster” has long been known for his flamboyant rhinestone-studded Manuel stage outfits. He is currently celebrating his 45th anniversary as a member of the Grand Ole Opry, where he continues to be one of its most popular entertainers. Wagoner’s new album, Unplugged, will be released on September 10.

A Kentucky native, Carlisle established one of country music’s most enduring careers. Born in 1908, Carlisle got his start performing with his family on local radio in Louisville. His older brother, Cliff Carlisle, went on to become a popular singer in the 1930s and Carlisle soon followed in his footsteps, scoring his first big hit with “Rattlesnake Daddy.”

Although they maintained solo careers, Bill and Cliff frequently joined forces as The Carlisle Brothers and became major radio stars during the Depression, fusing hillbilly, Hawaiian, blues, yodeling and vaudeville elements into their performances. The brothers’ best-known song as a duo was “Rainbow at Midnight.” After splitting amicably with Cliff in the late ‘40s, Carlisle hit the charts with “Tramp on the Street.”

Based in the Knoxville area, Carlisle worked frequently with the Carter Family, Archie Campbell, Don Gibson, Homer & Jethro and others. He hired a young Chet Atkins for both radio and road work. Soon, Carlisle had formed a new group -- The Carlisles -- and continued recording hit songs such as “Too Old To Cut The Mustard,” “No Help Wanted,” “Knothole,” “Is Zat You, Myrtle?,” “Shake-A-Leg” and “Honey Love.” The group’s success led to an invitation to join the Grand Ole Opry in 1953, where Carlisle soon earned his nickname “Jumpin’ Bill” for his wild movements on stage during his performances. Among his awards are a 1952 BMI Pop Award for “Too Old To Cut The Mustard” (also recorded by Marlene Dietrich) and a 1953 BMI Country Award for "No Help Wanted."

The group disbanded in the mid-‘60s, but Carlisle continued as a recording artist, earning a hit with “What Kinda Deal Is This?” in 1966. He still performs regularly alongside his son, Billy, on the Grand Ole Opry, where he reigns as the oldest member and serves as a living link to the dawning days of the country music industry.