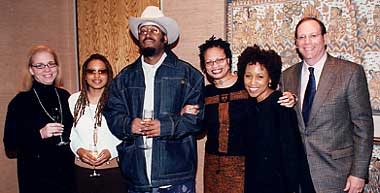 Members of the BMI New York staff were on hand to congratulate BMI writer/producer Mark Batson (center) who co-wrote four and co-produced six songs on India.Arie's current album. She has received seven GRAMMY nominations, including album of the year, for which Batson is nominated. Toasting him are his manager Deirdre O'Hara, his wife Arnae, and BMI's Kimberly Dawkins, Sydnee Stewart and Charlie Feldman.