Posted in News on September 26, 2001
In times of crisis, anger and grief, the American people seek the comforting and unifying power of music to ease the collective pain of the nation. The phenomenon was especially evident after the terrorist attacks in New York and Washington D.C., when songs of patriotism, hope and platonic love surged in popularity for radio and television broadcasts and public gatherings.

"Music is a means of communication that helps express our emotions and fears," said Al Bumanis, a music therapist and spokesperson for the American Music Therapy Association. "Music is a healing experience, and historically, music has been used in major life events, from prehistory on -- that's how people cope with these events."

"On a more negative note," Bumanis added, "that's also how people march into war. Music is a powerful societal influence. A case can be made that music is a powerful influence in the life of every human being. Music therapy is a profession that's based on that power."

It was during an international crisis that Lee Greenwood wrote "God Bless the USA" to deliver a message of concern and pride to his country and the world. His song has become a contemporary patriotic anthem, resurfacing repeatedly for America's milestones in the 18 years since the song was composed. "I wrote it on a piano in the back of my bus shortly after the Soviet Union shot down a Korean airliner in the fall of 1983," said Greenwood. "This was an atrocity that had to be answered." 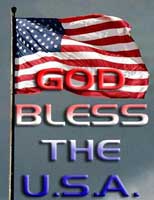 Greenwood said lingering feelings of remorse from the Vietnam War 20 years earlier, as well as an overwhelming sense of national pride were among his emotions when he composed the song. "It was a way of saying we are sorry for blaming the military for Vietnam," he said. "We should have welcomed the soldiers home. We needed to heal this nation about Vietnam."

"The song is being used at burials, memorials, Thunderbirds air shows, boot camp, Eagle Scout and Boy Scout gatherings, even pageants," Greenwood said. He performed it in person at the "Prayer for America" ceremonies at Yankee Stadium on September 22. "It's just amazing how people say it gets their emotional level up and makes them feel good about who they are �Americans," Greenwood said.

Music became a rallying point in efforts to raise money for the families of victims in the terrorist attacks, as dozens of musicians and actors came together for a two-hour telethon, America: A Tribute to Heroes, on September 21. Watched by more than 60 million people, the telethon has generated more than $150 million in contributions.

"I believe every artist there participated out of a feeling of helplessness and concern for our country," said Crow. "I wanted to play "Safe and Sound" because it was a song that was written out of my own concern for the future of our world. Because of this, I felt it could be a song of healing."