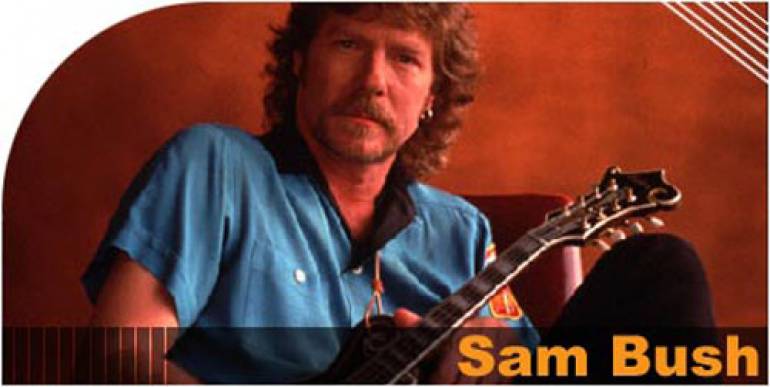 Twenty-seven years ago, the producers of the first Telluride Bluegrass Festival began looking for magic. They had a terrific location. They had vision - some called it nerve. But something else was desperately needed. It didn't take them long to find it. For their second year, they booked New Grass Revival, headed by master musician and bluegrass rebel Sam Bush.

Today, Bush, the only artist who has performed at 26 of the 27 legendary events, is considered more than simply the "magic" the festival producers were looking for. Sam Bush has, in fact, become the "cosmic glue" that has defined the festival's maverick spirit from the very start.

His latest release on Sugar Hill Records, Ice Caps: Peaks Of Telluride, is on one level a documentation of his important role at the festival. Culled from performances through the 1990s, Ice Caps makes it abundantly clear why he is regarded so highly at the festival (he's been dubbed "Mayor of Telluride" and "King Sammy"). But more important than the history is the celebration. Ice Caps captures Sam Bush's joyous way with music: a seamless blending of styles ranging from gospel to rock, pop to reggae, jazz to country, folk too, and of course, bluegrass.

Over the course of 16 tracks (two which feature hysterical commentary/introduction by Telluride staple Pastor Mustard), Bush glides through Bob Dylan's "Girl of the North Country," blazes through Bill Monroe's "Big Mon" and hammers the groove of John Matt's "Memphis in the Meantime." Other highlights are Jeff Black's "Same Old River," as well as self-penned instrumentals "Spooky Lane," "Stingray" and "The Ice Caps Are Melting." Few so-called "bluegrass" artists would (or could) tackle Kool & The Gang's "Celebrate" with the gusto Bush does. And in true Telluride spirit, Bush is joined on stage by some of the greatest players in the world, including former NGR bandmates Bela Fleck and John Cowan, dobroist Jerry Douglas, guitarists Darrell Scott and Jon Randall Stewart, bassist Byron House, drummer Larry Atamanuik and former Subdudes' member John Magnie.

Perhaps best known as the founder and driving force behind the legendary New Grass Revival, Bush's ability to make music that exceeds all expectations is evident by listening to his work over the past year. For example: two diverse projects, Bluegrass Mandolin Extravaganza (with David Grisman, Ronnie McCoury and Ricky Skaggs, among others) and Short Trip Home (with Edgar Meyer, Joshua Bell and Mike Marshall), were each nominated for a Grammy for Best Bluegrass Album and for Best Classical Crossover Album, respectively. The Short Trip Home project lead to a performance on the national broadcast of the Grammy Awards.

Meanwhile, Bush stays incredibly busy recording and touring with pal/former NGR bandmate Bela Fleck (for the Grammy-nominated The Bluegrass Sessions), as well as Lyle Lovett, Left Over Salmon, Emmylou Harris, Linda Rondstadt and Dolly Parton, among others. He recently made a guest appearance with Ringo Starr, playing "With A Little Help From My Friends."

His previous solo project, Howlin' At The Moon (1998), was an acclaimed work as well, as were his other releases (Glamour & Grits in 1996 on Sugar Hill and Late As Usual in 1987 on Rounder).