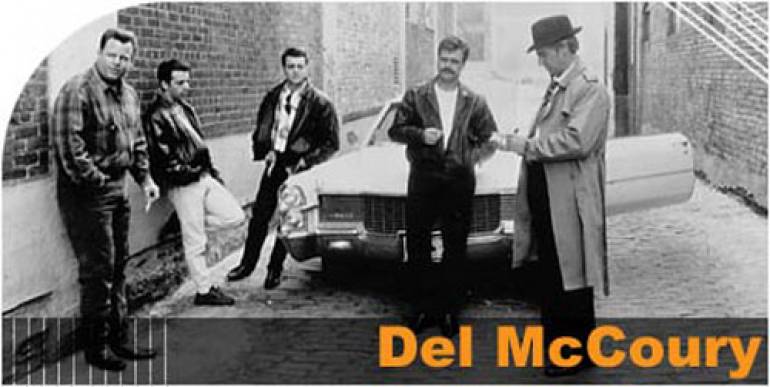 After 40 years as a professional musician, Del McCoury is one of the hottest things in bluegrass music. The four-time International Bluegrass Music Association Male Vocalist of the Year has epitomized the "high lonesome" sound since he rose to national prominence as lead singer and rhythm guitarist for Bill Monroe's Bluegrass Boys in the 1960s. Since coming to Rounder Records in 1990, his Del McCoury Band, featuring sons Ronnie and Rob, has become widely acknowledged as one of the finest traditional bluegrass band sin the world.

With numerous songs in his repertoire since signing with BMI in 1975, the emphasis of Del McCoury's bluegrass is traditional, providing an ideal example of the past and the future of bluegrass music.

Born in North Carolina on February 1, 1939, he played banjo in a series of local bluegrass bands in his hometown of York, Pennsylvania and around the Baltimore area. In 1963, he went on to serve an apprenticeship with Bill Monroe & his Blue Grass Boys, and it was Monroe who switched McCoury from banjo to guitar and first recognized his talent as a lead vocalist. His year-long stint with the Blue Grass Boys took him around the country and eventually to California, where he joined the Golden State Boys. In 1967 he formed his own band, Del McCoury & the Dixie Pals. Under this name, McCoury performed and recorded for several years (including the 1973 Rounder release, High on a Mountain) while working at jobs in logging and construction to support his family. In 1987, Del and his brother Jerry recorded a fine, self-titled duo album for Rounder.

In the late 1980s, Del established the Del McCoury Band around the talents of his sons, Ronnie and Rob, who have developed into two of the finest instrumentalists of their generation (Ronnie has won the IBMA's Mandolin Player of the Year each year since 1993, while Robbie has been nominated for Banjo Player of the Year each of the past seven years). In 1992, Del and his sons relocated to Nashville from their native Pennsylvania, and with the addition of bassist Mike Bub and fiddler Jason Carter, Del assembled a lineup that can hold its own against any band in bluegrass history.

The Del McCoury Band's first Rounder release was 1990's Don't Stop the Music, which included the bluegrass hit "Trainwreck of Emotion." In 1992, Blue Side of Town continued the hot streak, as Del received his third consecutive Male Vocalist of the Year nod. McCoury's third Rounder album, A Deeper Shade of Blue, won the IBMA's 1994 Album of the Year award, and Del was named Entertainer of the Year. Their first effort with producer Jerry Douglas, and the first to feature the current lineup of the band, it featured the hits "Cheek to Cheek With the Blues" and "True Love Never Dies." A side project for the band, 1995's Ronnie & Rob McCoury featured Ronnie's fine lead vocals on hit versions of Bob Dylan's "Walk Out in the Rain" and Jerry Lee Lewis's "Another Place, Another Time," along with enough hot picking to win 1996 IBMA Instrumental Album of the Year honors.

Their fourth Rounder recording, 1996's Grammy-nominated Cold Hard Facts, eventually logged a total of seven months at the top of the bluegrass charts, and they simultaneously held down both the number one and two slots with the title track and a version of Willie Nelson's "Blackjack County Chains." They won the IBMA Entertainer of the Year and Instrumental Band of the Year Awards honors in 1996 and 1997, along with Del's fourth Male Vocalist award in 1996, two more Mandolin honors for Ronnie, two Bass Player of the Year awards for Mike Bub, and 1997 Fiddle Player of the Year honors for Jason Carter.

The success of Cold Hard Facts and the band's brilliant live performances began to attract fans outside of the core bluegrass audience. Cold Hard Facts made it into the top five of the Gavin Americana chart and the band wowed alternative rock and country fans at Austin's South by Southwest Festival. Longtime fan Steve Earle invited the band to back him on his 1997 El Corazon release, and Del and the boys even made an impact in dance clubs as members of the Groovegrass Boyz, performing an exciting blend of funk and bluegrass along with Doc Watson, Mac Wiseman, and Bootsy Collins.