Posted in MusicWorld on February 28, 2001 by Jon Matsumoto 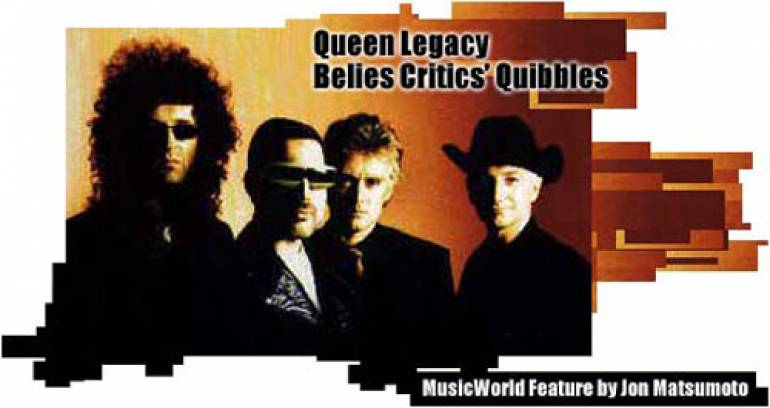 Queen's recent induction into the Rock and Roll Hall of Fame (March 19, 2001) is more than a tad ironic.

When the British band was recording its best and most popular records during the 1970s and early 1980s, many critics delighted in heaping scorn on the quartet's extravagant music and stage shows.

But Queen's music has clearly gained critical stature with the passage of time. Its very early songs were a key bridge between glam rock and heavy metal. In the mid-to-late '70s, the group's work reached new levels of creativity and accessibility thanks to the development of its four members as songwriters. Guitarist-vocalist Brian May and drummer-vocalist Roger Taylor wrote catchy rockers (e.g., "Tie Your Mother Down" and "I'm In Love With My Car," respectively), bassist John Deacon proved to be an adept writer of pop songs ("You and I" and "You're My Best Friend") and flamboyant vocalist-pianist-frontman Freddie Mercury was particularly skilled at penning ornate, sometimes campy tunes. His semi-operatic "Bohemian Rhapsody" stands as Queen's signature song. The track also showcased the group's layered vocal harmonies, which was one of Queen's most distinctive trademarks.

The foursome may have had trouble wooing critics, but they didn't have any problems corralling fans. Queen scored over a dozen Top 40 hits in the U.S.

Queen's popularity diminished in the U.S. as the '80s progressed, but it remained a potent force in many other countries. During this period, the group basically eschewed the amphitheater circuit in America in favor of performing in much larger arenas and football stadiums in places like Europe and South America.

In 1991, Queen's Innuendo album entered the U.K. charts at number one. But by then, rumors were rampant that Mercury was ill with AIDS. Later that same year, he released a statement confirming these stories. Two days later, Mercury was dead.

On April 20, 1992, the surviving members of Queen and other artists like Elton John, Annie Lennox, David Bowie and Def Leppard performed a memorial concert at Wembley Stadium in England. The show was broadcast worldwide to an astonishing audience of more than one billion.

Taylor, May and Deacon spent parts of the next three years completing Queen's final studio album, Made In Heaven. Mercury's vocal tracks for the album were recorded prior to his death.

May and Taylor continue to release solo recordings. May's 1992 Back to the Light album even went gold in the U.K. But it is the music of Queen, and not the band's solo albums, which will endure. Various compilation and tribute albums, documentaries and a boxed set have helped keep the band's memory and work alive since Mercury's death.