Posted in MusicWorld on January 31, 2001 by Danny Proctor 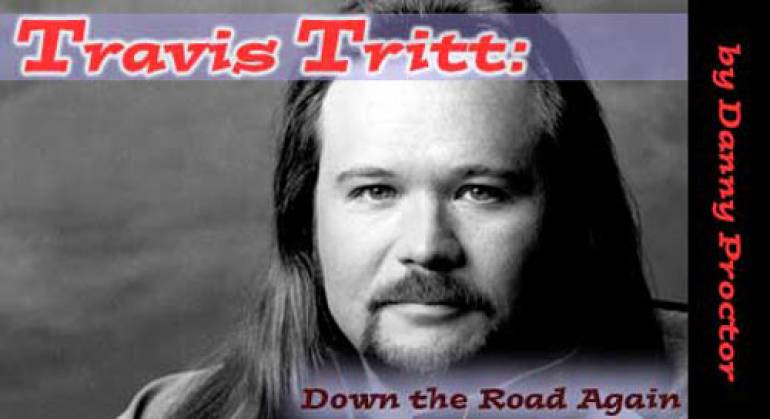 Travis Tritt is celebrating. After a self-imposed two-year hiatus from recording and touring, Tritt is back with a number one hit, "Best of Intentions." The single is the Georgia native's 12th number one and the first to be released from his new album, Down the Road I Go, his first for Columbia Records.

"When you disappear from view for 20 months, you hear this little voice whispering in the back of your head asking, 'Will people still remember me when I come back?'” says Tritt. "So when we come back the way we have, with the surprising success of the first single, it's obviously very exciting and reinforces the fact that I made the right decision."

Tritt's decision to take an extended leave of absence came about for several reasons.
"First and foremost, I wanted to spend more time with my wife and daughter," Tritt explains. "My wife, Theresa, was pregnant and I knew I wanted to spend as much time with them as possible after my son was born.

"I also knew I wanted to make some changes as far as my career was concerned. I felt that Warner Bros. and I had reached the end of our relationship in that we had done as much as we could do for each other at that point. There wasn't any animosity. My time with them had just run its course. It was time to move on."

Tritt wrote two of his seven album cuts — "If the Fall Don't Kill You" and "Southbound Train" — with one of his longtime heroes, Charlie Daniels. "I've been trying to pin him down for 11 years, but the problem is that even though he's 60-some years old, he does 250 or more shows a year and is constantly on the road," says Tritt.

The writing session finally came about after Daniels slipped on ice and broke some ribs and an elbow. "I called him because I was concerned and asked how he was doing and he said he felt fine. So I said, 'Good! Now that I've got you on the phone, why don't we write some songs like we've been talking about doing all these years?'”

After more than a decade, Travis Tritt feels he's been given a fresh start. "I have a lot of 'new' in my life right now and it's really neat. I've got a new band, new label, new album, new video, new single, new booking agency — just a new approach to this whole thing. I'm finding out that playing live and touring has become fun again. I couldn't say that two years ago. I honestly couldn't be happier."
SOURCEMusicWorld TAGS Country Musicworld Feature Artists Charlie Daniels Honestly Train Travis Tritt