Posted in MusicWorld on June 30, 2000 by jon Matsumoto 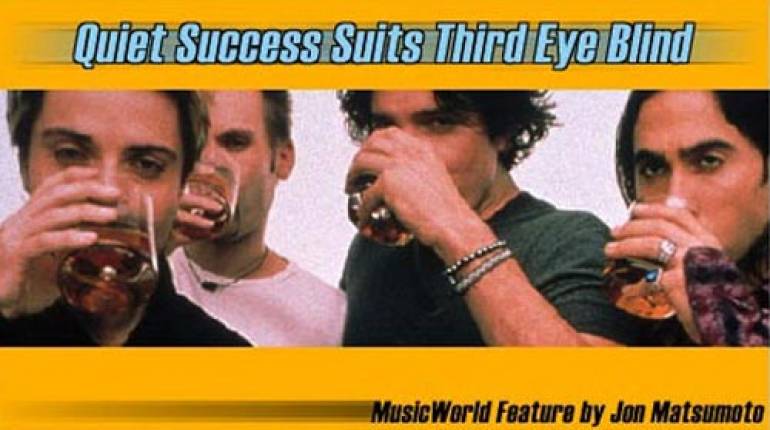 Third Eye Blind's 1997 debut album sold more than four million copies. Yet the self-titled disc never cracked the Billboard Top 20 and the band has never been featured on the cover of a major U.S. magazine.

"This has been a dream of mine since 1991: to make music for the people laying on their beds with their headphones on. I care about them, not about being some media band," explained frontman Stephan Jenkins in an interview earlier this year with the Dallas Morning News.

A huge reason for Third Eye Blind's commercial success has been its unflagging work ethic. In 1998 and much of 1999, the group toured virtually non-stop. But this isn't to suggest the band has been ignored by radio stations and video networks. Though the group has been received with skepticism by many critics, its hooky single, "Semi-Charmed Life," was a huge radio and MTV hit several years ago.

Even Jenkins was surprised that "Semi-Charmed Life" was such a runaway success.

"It's funny that it gets played," Jenkins once noted, "because the lyrics are totally filthy. 'Semi-Charmed Life' is about taking speed and having sex, and they play it on Top 40! It's a joke!"

Third Eye Blind's second and most recent Blue album is a more spontaneous effort than its mega-popular predecessor: Many of the songs derive from highly energized jam sessions. The band experimented with making the record in the style of The Rolling Stones, using the studio as a place to be creative, and the disc brims with accessible, guitar-laden pop-rock.

"Everyone just picked up an instrument and started playing. One of us would have an idea and someone else would start to embellish it which would inspire something else," says Jenkins. "There was no plan in making this record, except to make something that excites us."

Jenkins believes that most Third Eye Blind followers have been unfazed by this controversy.

"After our shows, I see fans, and what I see is thousands of kids who don't care about the gossip," he told a reporter. "The only people who are interested in stuff like that are the media."