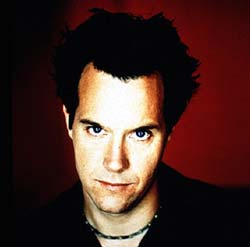 Whether he knows it or not, Peter Searcy is one of the original pioneers of the post-modern/alternative rock movement. A native of Louisville, KY, Searcy was the front man for the indie/college underground cult fave Squirrel Bait. He was but a teenager when Squirrel Bait came on the scene in the mid-'80s, with Spin magazine describing him as "having the best voice in rock and roll next to Paul Westerberg."

Growing up and moving on, Searcy went on to form Big Wheel, whose melodic heartfelt campfire songs played on electric guitars were the farthest thing from the punk/crunch/distortion of Squirrel Bait. Having put out three albums with Big Wheel, Searcy formed indie rock band Starbilly, after which he moved to Atlanta to focus on his own solo effort.

His first single, "Losing Light Fast," captures the infectious nature of rock and pop songwriting with a solid guitar rhythm. "Furniture" is an aptly blended rock song with an emotional hook, and "Invent" is a hopeful, guitar-driven song that highlights Searcy's resonating voice and earnest lyrics.

Searcy will be touring with Cowboy Mouth in July. For more information please go to www.timebombrecordings.com.