Posted in MusicWorld on April 30, 2000 by Jon Matsumoto 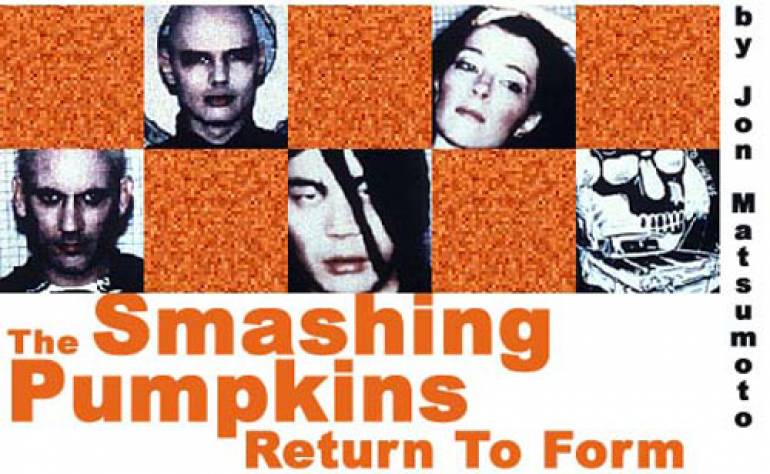 The Smashing Pumpkins might be the closest thing to a living, breathing soap opera as you're likely to find in rock & roll.

One of the top bands in the world thanks in large part to two hit albums (1993's Siamese Dream and 1995's Mellon Collie and the Infinite Sadness), the Pumpkin's hit hard times in the summer of 1996. Touring keyboardist Jonathan Melvoin was found dead of a drug overdose the morning the group was scheduled to headline New York's Madison Square Garden, and drummer Jimmy Chamberlin was subsequently tossed out of the band for drug use.

But instead of cashing in his chips, the Pumpkins' mercurial headman decided to forge ahead with the group he founded in 1989. It was a wise choice, as the Chicago-bred brigade's latest album, MACHINA/the Machines of God, represents a dynamic, catchy return to form for the group.

This once dysfunctional family also seems quite functional these days. In a surprise move, an apparently clean and sober Chamberlin was reinstated into the group. His high energy, dexterous drumming is a key reason why MACHINA rates so highly. Former Hole bassist Melissa Auf Der Maur also replaced longtime member D'Arcy Wretzky, who earlier this year was arrested in Chicago for allegedly buying crack cocaine. (The foursome also includes guitarist James Iha.)

Even Corgan, once known for his petulance and arrogance, has seemingly achieved a new level of inner calm and spirituality that's partly reflected in his new music.

"I think it's hard to travel the world, meet so many people, and go to places where people could care less about Mariah Carey and our world of pop and rock, without finding some sort of humility," Corgan told a writer recently. "And I don't mean humility in a kind of I'm-not-worthy way, but humility in a deeper respect for life and what goes on."