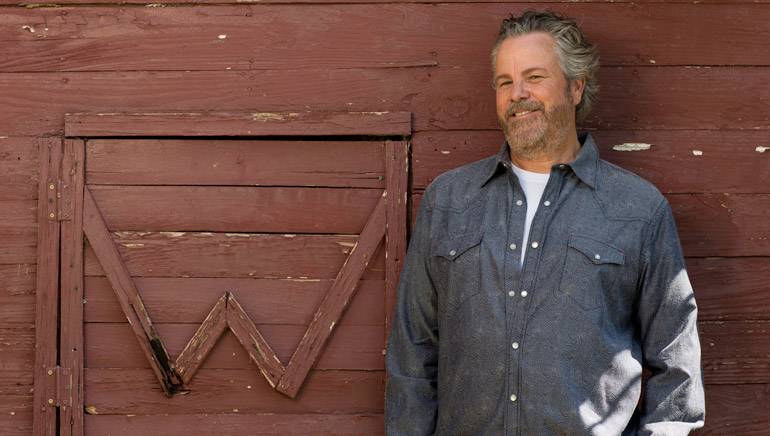 Original Americana poster boy Robert Earl Keen has had a front row seat — or, rather, a solid view from the stage — of the genre’s evolution throughout the years. After more than three decades in the business, the Texas-based songwriter has come a long way from pickin’ on front porches with buddies like Lyle Lovett (the two went to Texas A&M together in the late ‘70s, and they were inducted into the Texas Heritage Songwriters Hall of Fame in 2012 along with the late Townes Van Zandt), releasing albums that both pushed and defined the genre’s boundaries. His most recent, Happy Prisoner, is a love letter to bluegrass, featuring some of his favorite tunes.

BMI chatted with Keen just before he took the stage at Nashville’s Ryman Auditorium, where he would later play before a sold-out crowd eager to sing along to every hit. Keen, who lived in Music City for a couple of years in the ‘80s before returning to Texas, shone with gratitude when the house lights illuminated during one of the many songs in which the crowd took over the chorus. We talked about the changing face of the industry, juggling and how songwriting is a lot like school.

You’re no stranger to the famed Ryman Auditorium, even releasing a live album recorded there in 2006. Does playing in the Mother Church ever lose its thrill?
Absolutely not! Sonically, it’s a cool place to play. It has a unique sound, and you feel like you’re about as comfortable sonically as you can get. I have a very strange connection to the Ryman because I worked at Hatch Show Print back in the ‘80s when it was across from the parking lot. I used to go there on my lunch hour — you know, for $2 you’d take the tour — so I walked up and down the hallways a jillion times, so I know it really well.

With a career that spans three decades, you’ve certainly gained a lot of perspective on the music industry. Today’s songwriters have access to a variety of tools and resources, post-digital revolution, but do you think that makes it easier to forge a path in the music business?
I believe that the connectivity of the world now — particularly in the way of music — makes a lot of things a lot easier, although the competition is really steep. There are droves of people interested in making music, doing it from home, or coming here to Nashville, or getting a place on America’s Got Talent or The Voice or whatever. There are so many outlets, but there are so many people who are trying to get in the music business. I would say, as its gotten easier to produce things and get things out there, the currency now is, how can you get it out there and get it heard?

You’ve said that your most recent release, Happy Prisoner, is a record you’ve always wanted to make. What took so long?
I was always working from one project to the next, writing songs, and there were a couple of false starts, but it didn’t feel like it was right. The other thing is, I consider myself a songwriter and performer first. I’d almost consider myself a comedian before I’d consider myself a singer, and bluegrass is famous for having really great singers. I love bluegrass like I love prose, but if I try to write a book, it makes me crazy because I love great writing. So I’m kind of embarrassed because I don’t feel like I’m measuring up as far as like, a singer, but then I got to a point where I was like, I don’t care, I love these songs. I thought that was the idea, to make them the way I felt like they should be made, and of course I had Lloyd Maines to produce it, so it made it a lot easier on me, because he knows how to translate all that stuff, musically. I just know how to talk in concepts.

Were your fans surprised by a collection of bluegrass covers?
I really don’t know. I do know that people close to me really like this record. It’s almost like it gave them something to go, ‘Oh good, it’s not something weird!’ I don’t want to say I have an edge, but I have a loopiness to me, and sometimes I think it makes people uncomfortable. People are really comfortable with this record, even people that don’t care for my music, so that was a surprise. As far as the rest of the people out there, I’ve gotten really good comments, and I feel like I probably did the right thing.

You lived in Nashville for a spell before returning to your home state of Texas, but you’ve been spending more time co-writing here lately. Is the songwriting process different, collaborating with Music Row writers, with the intent of writing a hit?
Absolutely. The bulk of my stuff is stuff that I’ve written by myself. When I write by myself, I kind of zip around the guitar, and things float in and out of my brain, and I kind of finally connect it and put things together. If I were in a room with somebody, trying to get this point across, I don’t even know what the point is at that point. So what you have to do is go into these things and think in terms of, you’re actually just working with somebody. It’s like, remember when you were in high school, and they were like, ‘OK, get in groups of three, and we’re going to do this group project.’ Writing songs — and this does not mean to strip the talent there, there’s tons of talent — but getting together with other people is a different dynamic than writing a song by yourself. I certainly learn a lot more when I write with other people, because it’s amazing where people come from. Writing with other people at my point in my career is rejuvenating. It actually lets me sort of jet back to what I do really easily and comfortably. It gives me a fresh perspective; I get a big old hit of fresh air. My process isn’t necessarily different.

You’ve said that you’re drawn to narrative songs. Who are some of your favorite songwriters?
You know, the first thing that I have to go back to is Marty Robbins. When I got where I was buying records, I truly loved Willie Nelson. When he came out with Red Headed Stranger, I just thought, ‘Oh, this is so great. It’s like a movie in a record.’ And then later, I got into Dylan, who, at first, I was sort of arms-length with him, but I realized how incredibly brilliant he is as a narrative guy, even more so than an emotional guy. He’s truly a one-of-a-kind narrative songwriter. Richard Thompson is as good as it gets. My friend Greg Brown from Iowa is awesome!

You’ve collaborated with many of the same musicians and producers, such as Lyle Lovett or Lloyd Maines, through the years, and your most recent album features musicians ranging from Sara Watkins to Danny Barnes. Is there anyone you’d like to collaborate with who you haven’t yet?
Yeah, I want to do a duet with Sade. I think if I say it enough times, maybe it will happen. I just love her. I love her songs. Her songs are really Spartan and beautiful, there’s no wasted words — it’s just amazing. And her voice! It’s an old cliche, but she really could sing the phone book.

You’re passionate about investing in young musicians and songwriters through your support of the Hill Country Youth Orchestra and art in the schools in the “What Does Music Look Like” program in Kerrville. With access to arts in public schools rapidly diminishing, do you think programs like these can close the gap on ensuring exposure of and the development of art and music for children? How can people help?
The short answer is, absolutely, they help. The long answer is, how many people are going to get involved in those things? And I don’t think I have a lot of reach or a great deal of influence, however, I have worked very hard with the Hill Country Youth Orchestra and the public school system in Kerrville. We’ve worked really hard to create good relationships, and now we have this thing. My thought is, do what you can do, try to provide a good example, and hope somebody will follow.

You’ve been recognized by multiple organizations throughout your career — Texas Heritage Songwriters Hall of Fame, the Kerrville Folk Festival, the Americana Music Association — is there one particular moment that stands out as one of the most important, defining moments of your career?
I always measure my career, really, in magical music moments. Getting the awards, while it’s a great boost, and you can be like, ‘See, I told you!’ But I get more of some kind of soul satisfying feeling from certain times that I’ve played with people. I’ll give you an example: One time, I was in Ireland and I was opening up for Nanci Griffith, and she had this great Irish guitar player, Philip Donnelly, and there was this famous Irish singer named Dolores Keane, and we were in a bar. There was nobody else, just us and a bartender, and they sang this beautiful Irish ballad. You thank God you were there for that moment, because it’s so beautiful. You’re just glad you’re in this thing that they call music.

How did your relationship with BMI start, and how have they helped nurture your career throughout the years?
I might not be talking to you if it wasn’t for BMI. When I came up here [to Nashville] I struggled. For two years. One day I was thinking, ‘Could I continue my pursuit in music?’ I kind of failed, I bottomed out and moved back to Texas and was pretty despondent about it. I had so many freaky, weird experiences, and Nashville is a tough town. There are a jillion people who came here last week, and it’s like, ‘Get in line, pal. I’m already here!’ There’s always this feeling that as soon as you get here, you want to close the door on everybody else. I sat around and thought, this is one of those deals where you can try to learn from your mistakes. I was just too flippant in my approach, and maybe a little cocky.

Jody Williams called me up and said, ‘I heard you’re kind of unhappy.’ I said, ‘Yeah, it’s just not working, I really put a lot of effort in it.’ He said, ‘What’s wrong?’ I explained that I should have a writing deal, and why can’t I get a writing deal? And he said, ‘I don’t know, maybe you haven’t talked to the right people. He set up some meetings, and they were all nice to me. Up until that time, I literally got kicked out of offices.

What’s something about you that might surprise your fans?
I know all the presidents’ birthdays! [Laughs.] I have three or four Shakespeare soliloquies and I’ll juggle and recite them in the morning. I keep juggling until I get through it, but if I drop a ball, I have to start over.