Posted in MusicWorld on June 19, 2013 by Ted Drozdowski 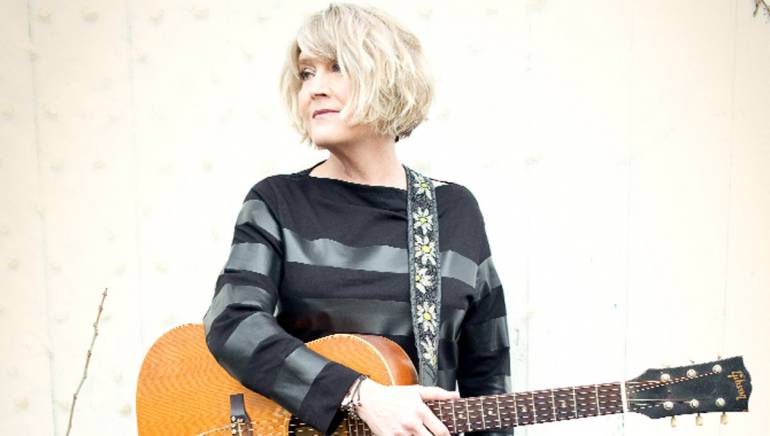 Kim Richey has never let the dust settle — creatively or literally. After moving to Nashville from her native Ohio in 1988, she dived into Music City’s co-writing scene. A deal with a publisher that financed a series of album-quality demos led, in turn, to a recording contract with Mercury Nashville in 1995. Through the course of nine albums and five labels and constant touring, Richey’s songs have expanded from country to pop to rock to folk to textural music to her present combination of all of those on the superbly crafted Thorn In My Heart, a smartly written, elegant and atmospheric 12-song set produced by her bandleader, Neilson Hubbard. Along the way she’s had major hits including the Trisha Yearwood number one country smash “Believe Me Baby I Lied” and the number-two charter “Nobody Wins,” co-written and recorded by Radney Foster.

After three years in London, Richey returned to Nashville just before she began writing for Thorn In My Heart. “It’s come full circle for me,” Richey remarks. “I went all over the place musically and geographically, but I needed to be in Nashville to write these songs.” She explained why by phone from the doublewide trailer she’s made her sanctuary just outside the city.

1. How did being part of Nashville’s music community influence Thorn in My Heart?

There are more great players there than any other place I’ve ever been. It’s crazy. And the style of writing in Nashville suits me so much better: sitting around with guitars or a piano instead of a track, and really trying to say something — trying to connect with people not just with the words, but with the music.

When I started this album, I went out on a limb and told my booking agent I would have a record out by April, even though I didn’t have any songs ready or know who I was making it with or what label it would be on. I just committed to that for touring. Once I got back to Nashville, I started to scramble and I wrote a couple songs with Neilson that I knew would be good. When we wrote Thorn In My Heart I had a better feeling about the album — that I’d be able to pull it off. And the people who played on the record are friends I’ve played with for years. When you make a record with friends you’ve played with a lot, there’s a different vibe from going into the studio and playing with people you don’t know at all.

2. What do you look for in songwriting partners?

It’s great if they can do lyrics and music. Music, to me, is the really fun part of writing songs, and the lyrics are the hard part. If you can write with somebody who is good at both, you can just play off of each other and come up with good ideas you maybe wouldn’t have on your own.

I write with other people because I enjoy it. When you really connect with somebody and write a song you’re both proud of, there’s nothing better than sharing that feeling.

3. What three songwriters have influenced you the most?

Joni Mitchell, for sure. She was the first person who made me really stop and think about songwriting. After I learned to play her song “The Circle Game” when I was in high school, I went back and bought all of her albums. I’m also a huge Tom Petty fan, and I love Steve Earle. They can paint vivid pictures in so few words. A good song is also really inclusive. It connects with as many people as possible. That’s why I first started writing songs — to connect with other people.

I’ve been touring more the last few years, which cuts into writing time. I try to write as often as possible. In the past I’ve always had a big batch of songs to go through when it was time to make a record, and I’d find the ones that fit together. By the time I was ready to make another album, I’d have another big batch of songs to glean through. This time was different, although I did find some older songs I’d written that were good for this album. Both “Come On,” the song Trisha Yearwood sings with me on the album, and “Take Me To the Other Side” I’d already written with [songwriter-guitarist] Mike Henderson. And “Breakaway Speed” didn’t make it onto my previous record because we ran out of space.

5. How did you determine the direction of Thorn In My Heart?

Neilson and Dan Mitchell and I have been touring as a trio for a few years now. Over the course of playing many shows, we figured out that what we do best is harmonies and other vocal parts, so we concentrated on the singing. That’s where we started with the record — focusing on songs that would benefit from our harmonies.

6. Was there a pivotal experience or chain of experiences that made you realize you’d found your own voice as an artist?

My fourth album, Rise, gave me that feeling, especially in my singing. I didn’t feel like I was trying to fit anywhere with Rise. A country label put out my first album, so I wanted to fit that framework, although I pushed the boundaries as much as possible. Bitter Sweet, my second, was still about that, but maybe leaned more toward the band’s performances. Glimmer was in-between — more pop in its instrumentation and production, but the songs and vocals were in a country vein. And then there was Rise. What’s most important to me is getting a song’s message across. It seems funny when somebody’s singing a love song and they’re just wailing at you, which I hear a lot in country. I don’t feel the lyrics when somebody’s singing a love song and they’re screaming.

7. You arrived in Nashville in 1988. How did you get to the point of making your first album?

I was working in restaurants, and the turning point was a showcase I did with [hit duo Foster & Lloyd’s] Bill Lloyd. From that, I was signed by Bluewater Publishing. I could not have been luckier than to have them be my first publisher. They also had Al Anderson, Tim Krekel, Jim Lauderdale… It was a fantastic, creative place. They helped me get a record deal. We were making demos that already sounded like finished records. We had wonderful musicians playing on them. That’s how I ended up getting a record deal.

But it’s always up and down, up and down, in the music business. One day I went into the Bluewater offices and I was worn out from trying to get a record deal, and I said, “I’m tired. I don’t want to do this anymore. It’s exhausting emotionally.” Just whine, whine, whine… And Brownlee [Ferguson, the publisher’s president] said, “Well, we think you’re a great writer and if you don’t want to keep working toward a record deal we’ll be happy to keep you as a writer.” I sat there for a while, and said, “Okay, maybe I change my mind and I want to keep looking for a deal.” It was the kind of enthusiasm I needed.

There are a lot of them, but one that’s not here anymore that I truly loved was the Bottom Line in New York City. There was always a great crowd and it was in a cool part of the city to hang out in. The room sounded great. I played there with Shawn Colvin and played a New Year’s Eve show with Buddy and Julie Miller. I did a writers’ show there with Trisha Yearwood and Pam Tillis. It had a lot of memories for me. It wasn’t the fanciest place, but it had a great vibe.

Because my friend Bill Lloyd was at BMI. Shortly after I got to Nashville he took me around and introduced me to the people in the business that he knew.

10. What advice would you give to songwriters starting our today?

Get out of the house and go meet people — other songwriters — and hear music. Go out and be inspired. Nashville is a really inspiring place. It’s great to go out and hear other people’s songs. Hearing really good songs inspires you to go back home and write better songs yourself.