Posted in MusicWorld on June 25, 2014 by Ted Drozdowski 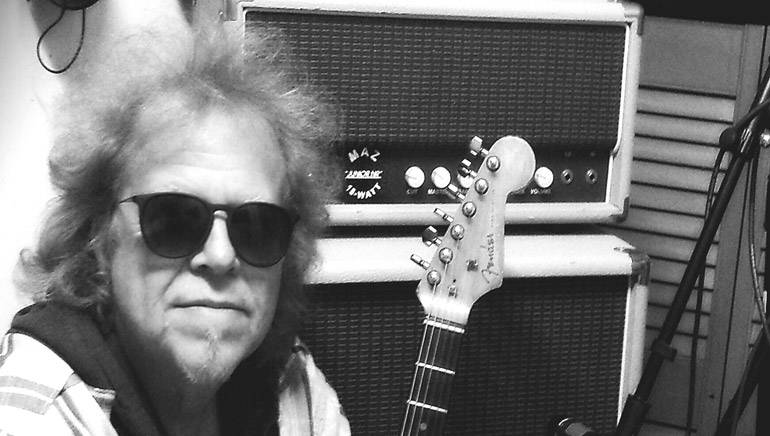 Nashville’s George Marinelli is best known as a sideman. He’s played guitar with Americana icon Bonnie Raitt since 1993, and before that he was an original member of the literate hit-making outfit Bruce Hornsby & the Range. But Marinelli’s third solo album, the smartly arranged pop-rock venture Wild Onions, truly displays every side of his artistry.

Marinelli co-wrote half its 10 songs with collaborator Rich Wayland, sang on every tune, played all the instruments on eight numbers and produced. He also directed, edited and stars in Wild Onions’ first video, for the hypnotically elegant pop song “Oh No, Not Love Again.”

The BMI singer-songwriter and renowned musician, who can be found online at www.georgemarinelli.com, learned to be eclectic from his earliest musical heroes, the Beatles, the Stones and Paul Simon, whom he worshipped as a 15 year old learning to play guitar. A few years later he was in his first bands and writing songs, and then became a session player on the LA scene before teaming with Hornsby in 1982. After nine years in the Range he quit and moved to Music City’s mellower but creatively fertile climes.

Marinelli spoke with BMI over coffee at the kitchen table of his home in a charmingly woodsy neighborhood, a few paces from his WingDing Studios, with his dog Rocky and cat Richard eavesdropping.

1. How do your skills as a songwriter, producer, performer and session player feed each other?
It’s holistic. And none of them can be turned off. Somebody recently gave me some songs by an artist I’m probably going to produce. As I’m listening to the songs, I’m thinking about the structure and lyrics, how the artist sings and plays guitar — to see how capable she is overall, and picturing the musicians I’d like to have play on the recording. I also imagine what I could play to make it better, to expand the dynamics or support the artist’s intentions.

2. Wild Onions is extremely eclectic, with obvious nods to the Beatles and Stones, but with elements of Jimi Hendrix, world music and psychedelia woven in. How did you distill so many influences into a distinctive, personal sound?
I come at it as homage, and then get selfish with it. I love to write in the styles of the artists who influenced me, and then incorporate sounds and production elements that get me off. I want to listen to this album as if I just bought it, and it’s knocking me out. I don’t second guess anything or worry about contemporary songwriting formulas. After all, how many records on the radio today will even be listened to next year? I want to make something that’s enduring, at least for me, and fun.

3. How did you create Wild Onions?
I made it here in my studio and played all the tracks on every song except two, “Hearts Don’t Break” and “Twisted Tango,” which I’d already recorded with Ricky Fataar and “Hutch” Hutchinson from Bonnie’s band. We were going to make an album together, but never finished it, so I asked them if I could use those tracks.

I write songs and record them as I go along. I don’t believe in demos or masters. I just record, and that’s how the process of making an album goes for me.

At the beginning of the 2012 tour with Bonnie, I had a new solo album called Believe. I got to sell it at the merchandise table at her shows, which is nice, so I decided I wanted to start recording another album. When we had a week or two off from the road, I would record songs. I don’t write well enough on the road, so that’s why half of the album is covers. Two of the songs are by my friend Mark Cutler, who is a brilliant songwriter based in Rhode Island.

4. How did you put your own mark on the covers you recorded: the Beatles’ “Baby You’re a Rich Man,” the Stones’ “Dandelion” and Clyde McPhatter’s “A Lover’s Question”?
First, I chose songs you don’t hear on the radio all the time. I’ll also try to do things that are very ’60s sounding, to stay in the spirit of the songs, like backwards guitar or white noise, like I did at the end of my own song “Hearts Don’t Break.” And I like to introduce unexpected elements, like making “Baby You’re a Rich Man” a little bit of a ska thing, and blending Jamaican and African music in “A Lover’s Question,” so it sounds nothing like the original ’50s R&B song.

5. What are your signatures as a guitarist and songwriter?
I’ve always been a song guy. I’m not looking to show off my chops. I do like some fusion, but by guys who write great chord changes, like Chick Corea. So I’m always trying to broaden the dynamics of a song and make it more interesting. I try to use tonal colors that are different from the other sounds going on. I look at the guitar as another way of singing. And I write lyrics to fit the music. I’m not going to write elaborate melody lines, because that’s just not there for me. I don’t have the greatest singing voice. I need to write phrases that I can execute, and that narrows the field.

6. How does Wild Onions represent your evolution as an artist?
When I grew up on Staten Island, before my family moved to Los Angeles, I lived in a varied ethnic neighborhood. I’d walk down the street and hear Latin and Italian music, rock ‘n’ roll, my parents listened to big band, and my sisters listened to jazz and Afro-Cuban music, too. In the ’70s and ’80s I got turned on to all kinds of music from the Caribbean, African music, Brazilian music. Those places have regional styles the same as the United States does. It’s all so rich and varied, and the possibility for being inspired is endless. I feel like I’ve finally been able to assimilate all of that.

7. What advice do you have for songwriters starting their careers today?
Don’t just listen to American radio. Find music from around the world. Listen to Antonio Carlos Jobim. Listen to his chord changes and melodies. Get away from just playing triads. I get jacked up when I hear new chords, and try to use them in a song somewhere.

Also, get something to record your voice — especially if you’re a performer. Many of the artists I produce haven’t recorded much or at all. It’s important to record yourself, listen back and experiment before getting into the studio. Try singing a song you’ve written a half step up or down, or in a less comfortable key. You might find its more interesting, or forces you to sing harder… which could make the performance better.

8. Which three songwriters have influenced you the most?
Paul Simon, because he’s always pushing the boundaries. His latest album So Beautiful Or So What is great. There’s obviously Lennon and McCartney. That’s the pop song handbook, right there. And Jagger and Richards. They’ve written so many good songs. A lot of their lyrics have really smart social commentary. For the same reason, I like the Kinks’ Ray Davies. I like artists who say something, but you can also get off on the music.

9. What’s your favorite live venue?
The Ryman Auditorium in Nashville is a great sounding stage. I’ve heard bands in there, too. It also sounds good in the room. There’s also the Cobb Energy Performing Arts Centre in Atlanta, which is a newer theater and really well designed. This place sparkles and is alive. Places like that… it’s easier to play, because you get something back from the floor, from the ceiling.

10. Why did you join BMI?
I had a lot of friends who wrote with other people, and one songwriter would be on BMI and the other on ASCAP, and the writer with BMI got more dough. BMI took better care of them. So I went with BMI.