Posted in MusicWorld on April 16, 2013 by Ted Drozdowski 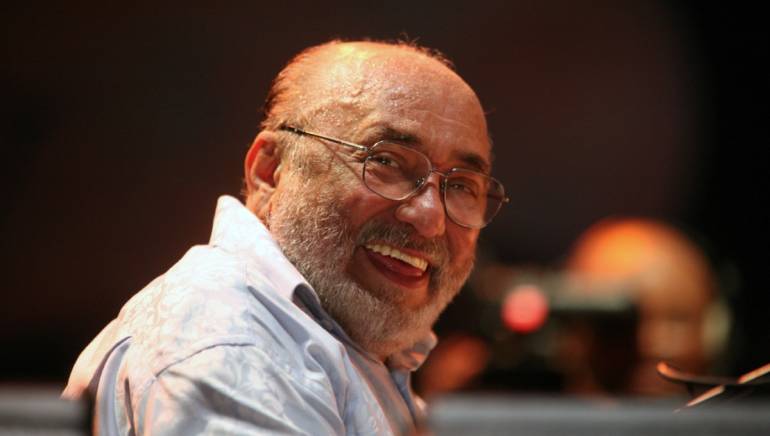 If happiness were electricity, speaking with Eddie Palmieri would be literally shocking. The 76-year-old Latin jazz giant’s enthusiasm crackles through his conversation with the same joy that permeates his performances.

Born in South Bronx, Cuban music was the soundtrack of his childhood, booming out of bodegas and played on piano at home by his brother Charlie, nine years older and a rising star in New York’s then-thriving Latin music scene when Eddie was taking his first lessons. “He was the pianist and I’m the piano player,” Palmieri says of Charlie, who died in 1988.

But the nine-time GRAMMY winner is modest. Palmieri has developed a unique pianist’s voice that balances his percussive attack with highly schooled musicianship and tremendous improvisational scope. We caught up with the king of the Latin jazz orchestra, a lifelong BMI member, by phone at his New York City castle, and he inspired us while speaking about his “spirit of investigation” and creative process.

1) How did you arrive at your distinctive piano and compositional styles?

I’m lucky I had such great teachers. My first was Margaret Barnes, who was a concert pianist. My brother Charlie was studying with her and recommended me. Another was Claudio Saavadra, who taught me independence in each finger. That led me to take one of the most talked about piano solos in the past 50 years in the composition “Azúcar Pa’ Ti,” which was included in the Library of Congress, with my band Conjunto La Perfecta in 1965. During it, I’m holding the traditional pattern with my left hand and taking a completely “free” solo with my right.

Bob Bianco took me into the Schillinger System of Musical Composition, which is mathematically based. That, and the jazz harmony I learned with Bob, put the final touch on my ability to compose for my orchestra and earned me a high degree of respect from jazz players. After I started combining these advanced techniques with the Cuban music that I loved, Latin dance orchestras started using the same harmonic structures I was using.

At the bottom of it all, I became me on the piano because I brought that percussive attack as a player. It became my signature. I also played timbales for two years. For a while I wanted to be my brother’s drummer. Then I realized I had to carry the bass drum, the snare, the cymbals… I saw myself heading for a hernia so I went back to piano.

Jazz came later. In fact, on a Sunday in 1964 after we finished a set with La Perfecta at the Palladium, my trombonist Barry Rodgers took me to see the original John Coltrane Quartet. My life changed after watching McCoy Tyner – who became my mentor in jazz – play the piano. I guess the short answer is, “I have a big musical appetite.” My music is a tribute to the spirit of investigation.

2) How do you keep the “spirit of investigation” alive?

I’m constantly listening and reading. I listen to the Cuban music of the ’50s and ’60s — a great sound that will never come back. It was perfection of the highest degree for what you can do in our genre: the orchestras, the singers, the instrumentalists, the great combinations of players. That’s my musical religion.

3) What’s your regimen for composing?

Right now I’m doing a score for a basketball documentary that’s coming up; it’s quite exciting. Out of that score is going to come a CD. Projects like that get me focused on new ideas, but I’m constantly thinking about new approaches within what I’ve done.

My wife helps me with that. She’ll hear something I’m working on and say, “You did that before.” And I’ll say, “Oh, thanks babe.” She’s got good taste. She was raised on the West Side after coming from Puerto Rico, and she and her friends used to walk to the Apollo Theater to see Sarah Vaughan, Ella Fitzgerald, Billy Holiday, the Billy Eckstine Orchestra. She knew about jazz before I did. She’s been a tremendous inspiration. I also learned from Bob Bianco that numbers can take you where the ear won’t. I can take a set of seven numbers and turn them into notes and immediately I can add a set of 21 chords and make them dominant or major or minor of whatever … put a form or voice to it… It’s called “melodization of harmonic structures,” which is the opposite of writing a melody and putting harmony to it. That’s what Schillinger called it, and that concept has helped me tremendously.

4) What advice would you give to composers starting their careers today?

Only one word: “preparation.” The more you’ve studied, the deeper your bag of harmonic structures and scales runs. As a player, ideas will come to you if you’re on top of your instrument. When asked how he created, Art Tatum said it best: “It’s all in the piano. All you have to do is sit down to get it out.” So the more you learn your instrument, the more ideas will come to you, and the more you’ll have to compose. And listen to many orchestras and bands. Have a big appetite.

5) Who are the three composers who have most influenced you?

More than three! I would have to start with the Cuban composers of Orchestra Aragón, that was my favorite orchestra — they were great with the charanga — and the piano player Luis Grinán, who is known also as Lee Martinez. Cachao [López] was a great composer. Tito Puente was a great composer, and, of course, there’s René Hernandez, who elevated the Pachito [Alonso, Sr.] band to another height. And Arsenio Rodríguez, who was brilliant. A friend of mine, the pianist Chucho Valdés, is trying to stage a festival in Cuba for Arsenio celebrating Luis Grinan. If that happens, it will be my first trip to Cuba — even though Cuba has been in my heart for the past 60 years.

6) If you weren’t a composer, what might you be?

I’d like to collect all the money for Powerball. Then I’d change it into singles, throw it in a pool, and swim in it. Or I’d be a baker. I like making dough.

I love the Lugano Jazz Festival. It’s in Switzerland, and a river runs through the city. On the other side, it’s Italy. It’s absolutely gorgeous. Here in New York, the Village Gate was quite wonderful. And the Blue Note in Tokyo, Japan is unlike any other place. They treat musicians with such respect. When you come in, even the cooks bow.

I’ve been with BMI my whole career. I am one of those faithful guys. They’ve treated me great and I would never change. All of my heroes were with BMI, so that’s where I wanted to be, too.

9) What do you see as the future of Latin jazz?

Latin music is under the world music umbrella now, which is good. That means that wherever we go, there are radio programs that play our music. In Japan they’re intrigued by the percussion instruments in Latin music and they sing phonetically in Spanish. They sound great! There are plenty of orchestras coming out of Japan and Europe with Cuban names. I can’t believe it! And the greatest dancers I’ve seen have been in Finland. These things elate my heart. That means the music will continue and find new listeners.

The only negative is we don’t get airplay like we used to. When I was a young man playing stickball in the street, I would hear Tito Puente and the Machito band coming out of the bodegas. There were mostly Puerto Rican bodega owners then, and they would all play the radio loud enough so you could hear it in the streets. Airplay on the commercial stations just doesn’t exist anymore for any kind of tradition-based Latin music or jazz, and we’ve all suffered dearly for this.

10) What do you think your music says about you as a person?

That I’m a very nice guy and I love my music so much. That I love to see people dance. That I love to be happy and make people happy. I’m so lucky to have had a career that’s given other people and me so much joy.