Posted in MusicWorld on November 25, 2013 by Ellen Mallernee Barnes 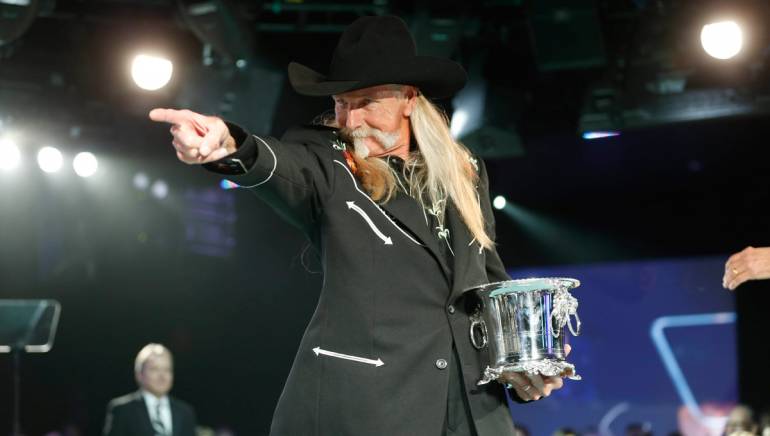 Dean Dillon’s life has been the stuff of country songs—hard-living, hard-earned, bootstrapping, boot-wearing. He grew up poor in East Tennessee, and just out of high school in 1973, hitchhiked to Nashville to take his chances as a songwriter. That’s where he met George Strait, presented to Dillon then as a “young gunslinger from Texas.” No one had heard of Strait yet; few had heard of Dillon either. Strait’s debut, Strait Country, included six of Dillon’s songs. Since then, Strait has recorded dozens more Dillon songs, as have artists like Kenny Chesney, George Jones, Lee Ann Womack and Toby Keith.

This month, Dillon was honored for his life’s work as a writer of country songs with heart and soul to spare. He was presented with the BMI Icon award at the 61st annual BMI Country Awards, news of which, he admits, made him cry. “Songwriting is life,” explained Dillon, during a phone interview from his ranch in Gunnison, Colorado. “I love to be able to paint a picture, and hopefully it will change the world. I like having the ability to make someone laugh or make someone cry.” Here, Dillon discusses his collaboration with George Strait, his personal struggles and his new projects on the horizon.

1. You’ve already taken home 31 BMI Country and Pop Awards, but how are you feeling about having being named BMI Icon.

Pretty floored really. I sat there and watched those guys get ’em in the past and thought maybe someday. I’ve been doing it a long time, but I never expected it to happen so soon, you know? This year. It’s pretty amazing. Very humbling. Del Bryant called me from New York and told me about it. ‘Course I started crying, ’cause you’ve got to understand, songwriting has been my life. It embodies who I am and what I am, and any time you’re recognized for your body of work I think it’s just an awesome experience.

2. BMI President Del Bryant has been a legend in the music community. Can you tell us about your relationship with him and memorable moments in your history with Del?

Well, Del showed up back in … 1975, I think it was … at a songwriter’s showcase that they were having at Opryland. Bob Whitaker, who was the director of live entertainment at the time, knew there were a bunch of us who wrote songs in the park, and he put together a songwriter showcase and invited a bunch of people from Music Row; Del showed up with Frances Preston. I had actually signed with BMI when I was 16 years old, when I came to Nashville and cut a record. But that’s the first time that anyone from BMI had come to see me play or perform or hear what I was writing. From that experience my relationship with BMI has been, I don’t know, for lack of a better word: amazing. The way that BMI has taken care of us—the songwriters’ community—they help us out in good times, and they help us out in bad times. Del in particular… you know, we just hit it off, and he’s just a genuinely caring person about songwriters. And I had the utmost respect for his mother and father and he as well. And I’ve been blessed with … every time I see him it’s like seeing an old friend. And I enjoy being around him; Del’s a great person. I enjoy talking to him. I come to New York every once in awhile, and Del still always shows up when he can and says hi and sincerely cares. I appreciate that. I appreciate that from the whole BMI staff as well. Clay Bradley, Mason Hunter, Mark Mason, all those guys are just wonderful people. They’re in your corner. If you’re a songwriter, you’ve got a friend.

3. Another person who your career has been completely entwined with is George Strait; you started working with him in the 1970s, correct?

Yeah, I was writing with Frank Dycus in 1979 and shortly thereafter was asked about pitching some songs to a young gunslinger from Texas. Back in those days, if you had a great song, you really wouldn’t pitch it to an unknown. You wanted a Haggard, or a Jones or a Cash or somebody. But I heard about him, and I don’t know, I was just always a rebel and I didn’t pay much attention to that. I just wanted to find someone who I would enjoy listening to sing my songs. George Strait fit me. The great thing about relationships is after my first album—he cut six of my songs on that first album—after that, every time he went to the studio he never failed to call me. He never forgot me. He never forgot that I went out on a limb and pitched my stuff to him and that’s what’s solidified all these years of songs with him.

4. I want to hear about how you hitchhiked to Nashville in the 1970s with your guitar and not much else … Do you feel like you were better equipped to write about hard times because you lived them?

Absolutely. We grew up poor. We didn’t know we were poor but we were. We really didn’t have much growing up and I had kind of a tossed-around childhood. When I got out of high school in ’73, I stuck out my thumb and hitchhiked to Nashville. I weighed 135 lbs. soaking wet, 18 years old, but I knew Nashville was where it was at and I wanted to be a part of it. So I got there and I’d hang around as long as the money would last, and then I’d go back home and try to work a little and get some more money and then come back. I think finally in ’75 the auditions for Opryland came up, and that provided me with the resource to do what I wanted to do. It provided me the money to stay in Nashville. I’d sit between shows and write songs and that’s basically how I got discovered. I was sitting backstage of Country Music USA one day and a guy walks up and said he hears I write songs, and he listened to a couple of them and in turn introduced me to Tom Collins. I met Tom Collins a week later and played him two or three songs, and he offered me a publishing deal and signed me for 50 bucks a week. That got the ball rolling. Three weeks later I had three songs on Barbara Mandrell’s “Friends, Lovers, and Strangers” album. It all started happening pretty quickly after I got the publishing deal. 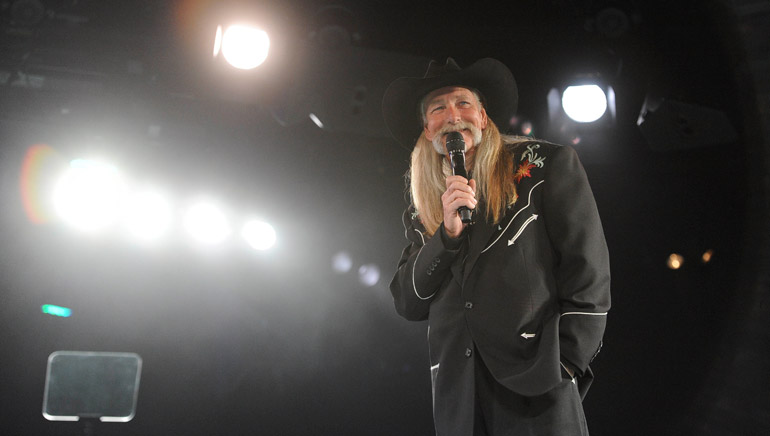 5. Your song catalogue is pretty incredible. Can you pick a song or two that you’ve written that you’re especially proud of?

Sure, “The Chair” with Hank Cochran. It is probably my most favorite. And then there’s a certain other song called “A Lot of Things Different” that I wrote with Bill Anderson that Kenny Chesney recorded. Those two songs in particular are at the top of my list.

6. Since we talked a little bit about hard times, I know that you’ve struggled with alcoholism. Was it different trying to write songs once you got sober? Did you have to re-learn how to write a song?

Hell, I’ve struggled with it all. [Chuckles.] Well, when I got sober, yeah. It was a pretty frightening experience to get sober and not be depending on it. It took about three years for me to get my head back. I think the first year I was sober I wrote one bad song, and the second year I was sober I wrote about three or four, and the third year, I wrote five or six. It wasn’t an easy process, but you know, like the song says, I would have done a lot of things different but it is what it is and it happened the way it happened. You know, it’s part of my legacy. It’s just part of who I am.

7. Knowing that some up-and-coming songwriters will be reading this piece, can you share your go-to advice to songwriters looking to break into the biz?

The best advice I can give at this time is to find someone who’s been in this business awhile, a songwriter that’s been around the block, and hook up and learn. I always found myself paired up with people older than me—Frank Dycus, Hank Cochran. Both of those guys taught me so much about songwriting. Hank was just this incredibly brilliant mind and I picked up so much from him. Frank Dycus as well. He got me my first four or five years and after I met we wrote Marina Del Ray, all that stuff. Then I hooked up with Hank and Hank just seemed to take it to a whole other level. The young songwriters today … they just write in such a box. And that’s all well and good, because you write what you know. But at some point you’re gonna have to write what you don’t know. That’s gonna separate the men from the boys, when you write what you don’t know, and you write something great. Everybody knows about trucks and everybody knows about beer and everybody knows about dating, but you’ve gotta open your mind. You’ve gotta ask somebody who’s fairly well seasoned to show you the tricks of the trade.

8. What do you love about writing country songs?

It’s life. I love to be able to paint a picture and hopefully it will change the world. I like having the ability to make someone laugh or make someone cry or someone feel this way or that way. I love the art of writing a song. Above and beyond that, I don’t stray out of my ranch so to speak. I just like to write songs.

9. What’s a day in the life of Dean Dillon like?

I’m still doing it. I still throw around 50, 60 songs a year. I’ve got a lot of guys. I’ve got a ranch in Gunnison, Colorado, and I have somebody in here just about every week in the wintertime. When I’m in Colorado, I’m usually riding horses all summer. I usually have a couple of guys come out in the summer and we’ll write some, and from October to January I’ve got an office to work from, and Monday, Tuesday, Wednesday you’ll find me there every morning at 8.

10. What’s next … is there something you want to do or accomplish that you haven’t gotten to yet?

Yeah, there is. I’ve got some guys—I’m not going to say their names because nothing’s in stone, but I want to get an act and work with them. Produce them, make records with them, and I’d love to do that more than anything right now. I’ve written songs for everybody and their brother, but I’d really just like to sit down and concentrate on one concept with someone and bring it to fruition where it can be successful.