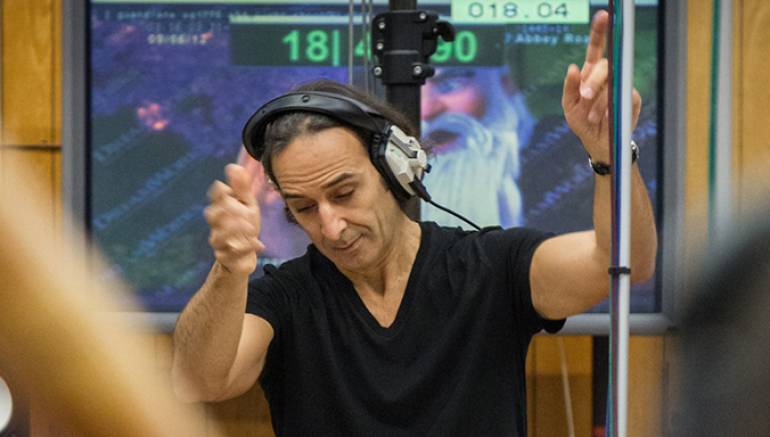 Alexandre Desplat is sitting comfortably in his hotel room in New York. Despite a morning-full of press questions about his score for the fast-approaching DreamWorks epic Rise of the Guardians, which bears his emblematic touch and symphonic daring, the Grammy-nominated composer appears pleasantly unruffled. He sounds entirely at ease, too. Words spilling in a syrupy Parisian cadence and crackling in a soft rasp, Desplat recounts how he charted the transition of Guardians’ characters from the cheeky archetypes we associate with holidays into adrenalized action heroes.

1. How or where did you tackle the challenges and dynamics this movie demanded? Were those challenges clear to you from the beginning?

What strikes me with this film, and struck me very early on—is that to me it is a live action film. It’s not an animation film. The way Peter [Ramsey] directed it is just like live-action. After awhile you forget that these characters are made of paint and drawings. I think the great quality comes from the characters themselves, the way Bill Joyce invented them, designed them. They’re really full of life, all of them. They have a great specificity; every one of them has a strong personality, and they all have a soul. The wonderful cast, the production design, the cinematography and the light are so exceptional that they add a lot to the sense of reality.

That makes your life easier when you’re going to compose because you have something human to relate to. Some live action can lack that; just because it’s not well written or not well acted—whatever it is—there’s something that can-not work. In this one, an animated film, everything works. It is incredibly impressive. And the producers, Christina Steinberg, Bill Damaschke and Jeffrey Katzenberg have shown all along the composing process a lot of ambition, benevolence and caring.

2. And remarkable, considering these are imaginary characters most of us are already familiar with or have our own concept of, like Santa Claus. Personally, where were you pulling from to surround them with musical personalities?

We’re talking about myths that kids, and the kids in us can refer to. I was a child myself once—long ago [smirks]—but I have children too. I have two children—grown up now but at some point they were very small and they believed in these characters. They are slightly different in France since we don’t have the Bogeyman, Jack Frost or the Easter Bunny. But we do have Santa Claus, the Sandman and the Tooth Fairy—even though it’s not the Tooth Fairy in France; it’s La Petite Souris, as seen in the film when the Guardians travel to Paris. And when I was a child which was late in the 60’s, there was a TV program every night that I was allowed to see, I think around 7 o’clock. The main character was the Sandman, and he would tell stories. So it’s always been there.

3. Were these characters changing as you worked on the soundtrack? Or was the film mostly done by the time you started composing?

No it was pretty much done. It was three months away from finishing. I was lucky, because it can be very painful when a film requiring so much detail and precision to picture is re-cut: It is a lot of work and drama when you need to rescore. And your brain starts to be blurred because you lose the vision, the energy and you lose desire “What else could I write? I don’t know.”

4. As for the music itself, did you boil characters down to textural elements, or was it by specific musical themes, or what?

Once we had decided there was an orchestral score to write—that it would be a symphonic orchestra—we agreed that there would be character themes. It made sense for the story and for the genre; for the mythical legends we wanted to be able to distinguish from one to another. There’s a Guardians theme, which reunites them all, and of course situation themes, like Easter, the elves’ fanfare—moments where the music has to be playing what is happening on screen.

In the instrumentation there’s symbolism with North [aka Santa Claus] at times, some Middle Europa flavor. But it is organic in the score, it is in the wide field of the orchestration; it’s not showing off too much.

5. You mention North’s character: Given his Cossack archetype—he even exclaims “Shostakovich” in the film—was there any temptation for you to pay homage to iconic composers with this score, to throw in a nugget for classical aficionados?

No. None of that, though Stravinsky’s “Firebird [Suite],” at the very beginning, gave me a very straight line of challenge: “Go match Stravinsky” [chuckles]—better get a lot of weapons—“Go match the scope of it,” which is huge. “Go match the invention, in terms of orchestration; go match the rhythmic or the melodic inventions.” It was actually a good starting point, but that’s all it is, after that there is no reference. I think it’s really my music. It sounds like me. If you listen to my previous scores I’m sure you’ll find it is connected, no doubt. And the end titles song, an extension of the main theme performed by Renee Fleming is another clue to my love for Bernstein, Porter, Gershwin, Ellington and all the giants of the American songbook.

6. Is there a single criteria you look for when considering whether or not to sign on to a new production?

The script is crucial. I wouldn’t go with a script that doesn’t resonate for me. I have to be passionate about it because I give all of my energy and my love to the project. It can be an actor or actress that I love so much that I want to spend time with her, or him—or not. I’ve turned down a movie, at least twice where [laughs], “I don’t want to stare at that face in my studio, too long.” But I’m very lucky to be offered movies where I can choose. I’ve not always been in that situation. I did 50 movies before Girl With a Pearl Earring and I can’t say every one of these movies was my first choice.

7. Considering that period in your career, what’s your advice to would-be composers? Is not turning down a project more important than redefining your comfort zone?

Well the comfort zone is the worst. I think any creative person—I don’t want to say ‘artist,’ because if I’m an artist I’m working for a collective artwork, so it’s different—every creative person needs to be indentured. Not all the time, because it’s tiring and can be very unsettling. But I think regularly you need to be able to go adrift from your comfort zone into a movie where you’ll be really in danger, trying to find a new way and direction.

That’s what I’m trying all the time. I think it’s a key to your energy, but also: Always continue to listen to music, watch films and try always to understand what is it that the movie requires? And what music plays—why does it play so well or so bad? What makes it necessary for the film? It can be orchestration, melody, no melody, and can be the diegetic art; it can be very few moments of music, or a lot of music. It can be so many things. There is no formula.

I always ask myself when I start a film, “Where does it start? Why am I here? Why do they need me? What can I bring to the film?” It’s crucial that you get this humility otherwise you just throw music to a film; it’s useless.

8. A good part of your reputation as a film composer is rooted to your intuitive dexterity and range in styles—do you owe that to the types of music you listen to?

I’m a symphonist more than anything. But I’ve played jazz, and bossa nova as a flautist, and I’ve listened to jazz maybe as much as symphonic or chamber music. This morning I was listening to Edu Lobo, the Brazilian singer, on my iPod: blasting in my hotel room. There are many things that have been my own obsessions, and it goes also to Greek music because my mother is Greek, it goes to Middle Eastern music because my father loved Middle Eastern music.

When you keep hitting with your hammer, every day, every morning, all these influences slowly but surely crystallize—they become something that belongs only to you—but talent is not enough. It’s hours of trying and trying again, dislocating and rebuilding.

9. Which composers have most directly inspired you?

I didn’t mention Bill Evans in my jazz family, as well. But I should mention composers I love, like Danny Elfman, Thomas Newman, Mychael Danna: these are composers I really like because they have personality. And of course, the master of them all, John Williams.

Here is a very simple answer: when I first came to work in Hollywood in 2004 my manager Robert Urband, who sadly passed away recently, introduced me to everyone in town, agents etc.. I met with people at ASCAP and BMI, and I felt very close to Doreen Ringer Ross. I just felt that the human aspect of it was the best thing to go for—and with Doreen.