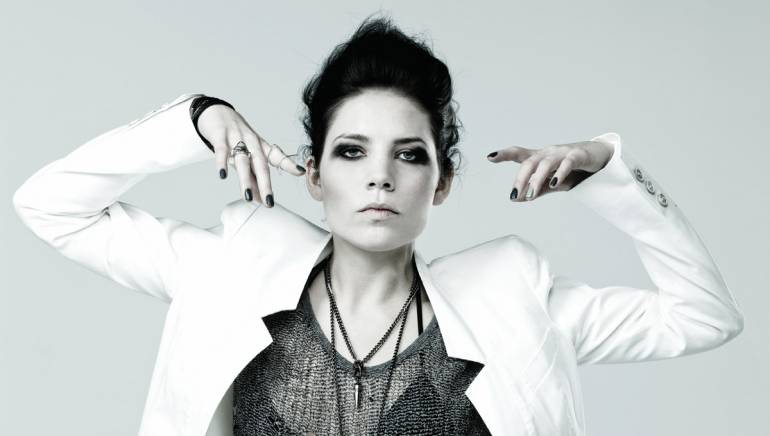 Skylar Grey will be hard-pressed to top 2011. Last year yielded a stunning Grammy performance—and nomination—festival appearances, and a European tour. But it’s all been leading to Grey’s debut album, Invinsible, expected in the coming weeks. Grey is again partnered with her golden-eared producer pal Alex da Kid, whose steely, mammoth-like beats hammered beneath Grey’s vocals during last year’s string of collaborations with hip-hop heavyweights and, lest we forget, her breakthrough “Love the Way You Lie,” recorded by Eminem and Rihanna.

1. The two singles, “Dance Without You” and “Invisible,” underline the album’s sonic variety, which you’ve discussed in prior interviews. Did you and Alex strive to make each song different?
I just do that by intuition. If it sounds like something I’ve done, I won’t even start writing to it. I do what feels right and I listen to the album as a whole: Anything that sounds redundant, I’ll look at and possibly change. I don’t go out and specifically take a song and say, “I wanna do something like this”—because that never worked. For me, writing a song is a really specific emotion. Once I’ve already done it, it’s hard for me to do again; I’ve already experienced different things to write about.

2. Is there a song on Invinsible you’re especially proud of, or can’t wait for people to hear?
A song called “Final Warning” happened around the same time I wrote “Love the Way You Lie,” and that’s one of my favorites on the album. There are a couple songs from around that same time. When you’re making an album you write a lot of songs and cross out quite a few, but that one has lasted.

3. Is it safe to say you’d recommend that a songwriter find a co-writer, producer or editor?
Yeah. When I produced and wrote a lot of songs myself I became so close to them because I was the one concentrating on drum sounds, lyrics, melody, and the mix. I became so close that I had no perspective anymore. That’s one of the reasons I went to New York and met with my publisher. I said, “I need to find someone who I can trust to bounce things off of—not ten other people—one person I can partner up with to give me that perspective, because I’ve lost it. I have these great initial ideas and then as soon as I flush them out I don’t really know what I’m listening to anymore.” I wanted to focus on the songwriting side, and she introduced me to Alex.

4. How has the partnership changed your approach?
When Alex makes a suggestion, instead of being bruised by it I’ll look at what he’s saying and try to tweak it. A lot of the time I come up with something I’m even happier with. I may have poured my heart out into a song, but at the end of the day, it may not be that good of a song. It was a good release – the process of it – but the song doesn’t actually work. I used to be really precious about things, I think because I always used to think I was drying up creatively and that I only had a certain amount of songs of me. I did go through a period of writer’s block, but I got through it. I always do, even if it’s years later. I just have to remember that there’s a lot more where that came from.

5. Should an aspiring writer write every day? Do you recommend a regimen?
If you’re writing for other people or under pressure to produce a lot of work then I think you should. I’m not like that. I’ll go through periods where I don’t write a song for a month and then I’ll have a week where I write 20 songs. But my thing is quality over quantity; if I’m not liking something within the first hour of writing it, I just throw it away. It’s not worth it.

6. What are your favorite albums?
I love Kid A, the Radiohead album—that’s one of my go-to’s. And Mezzanine, by Massive Attack. It has “Teardrop” on it. My favorite album this year was the [self-titled] Bon Iver album. I had an a-ha moment listening to that record because of the amount of space. It was something I’d realized in the past but, you know, you forget, and I realized again: The space is just as important as the note.

7. Favorite flicks?
The Deer Hunter was one of my favorite movies. Into The Wild is another. Movies are more inspiring to me than anything. It’s like the ultimate form of art: Every element is brought into one thing and it’s so exciting to me. I’d love to work in movies somehow, one day.

8. Any favorite soundtracks? If you could score a movie yourself, which would it be?
I remember the Memoirs of Geisha score and I remember loving it. I’m not gonna answer that question, because that means that I’m going to insult the person who made the score. I think I’d just want to make a score for a new movie.

9. What’s your favorite music venue in New York?
I recently opened for 30 Seconds to Mars at Hammerstein Ballroom. That was a really dope venue.

10. You started out recording songs under the name Holly Brook. What would Skylar Grey say to the 15-year-old Holly?
“Thanks for making so many mistakes”—that’s what I really learned from. I don’t feel like I’m that much different, as far as my skill-level or songwriting ability, than I was ten years ago. I would say, “Keep doing this, and giving it 100%. At some point the universe will meet you halfway. It might suck right now, but persistence really does pay off. Keep plugging.”